Nurse, 75, battling breast cancer after missing check-up aged 70 demands answers over screening scandal which has hit 450,000 women and cost up to 270 lives

A nurse battling breast cancer after being diagnosed with the deadly disease two years after she was denied a life-saving scan said today: ‘I don’t know if I’m going to survive’.

Patricia Minchin, 75, said she was not offered a screening in 2013 when she turned 70, and is battling breast cancer after finding a lump herself when she was 72.

Two years later she was diagnosed with breast cancer – which has also spread to other parts of her body – and she is sure she could have avoided the ‘trauma’ of the disease with earlier screening.

The grandmother and mother-of-four from Bushey, Hertfordshire: ‘I feel absolutely let down. I worked for the National Health Service all my life, I was a nurse. I don’t know if I’m going to survive’. 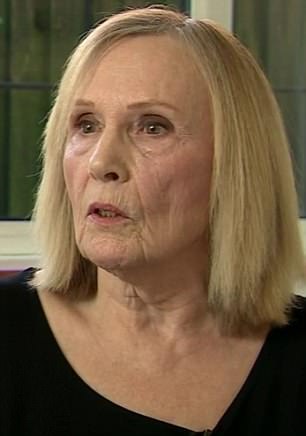 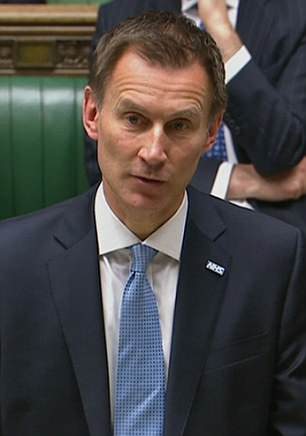 Patricia Minchin, 75, said she was not offered a screening in 2013 when she turned 70, and is battling breast cancer – one of 450,000 women Jeremy Hunt admitted the NHS forgot because of an IT glitch 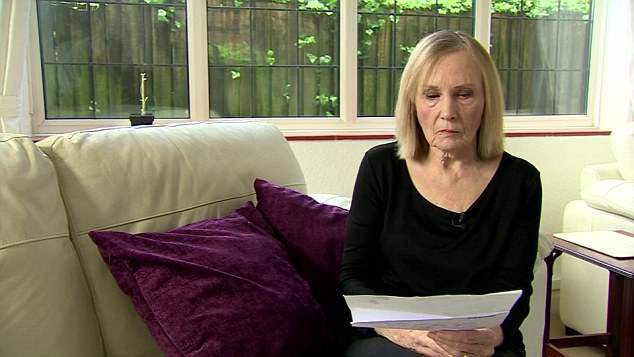 Q&A: WHAT TO DO IF YOU MISSED OUT ON A BREAST CANCER SCREENING

Q: I missed out on a final breast cancer screening, what can I do?

A: Jeremy Hunt today said surviving women who are still in their early 70s will be offered a catch-up screening. A helpline has also been set-up.

All women affected who wish to be screened will be invited to one in the next six months – he said most would be screened sooner than that.

The NHS Choices website provides further information and the option to contact your local unit to book an appointment.

All affected women registered with a GP will receive a letter by the end of May with further information.

Q: How do I know if I did not receive my screening invitation?

A: All women affected who are registered with a GP will be informed by letter from Public Health England (PHE) by the end of May 2018.

Women affected aged up to their 72nd birthday will receive a letter inviting them for a catch-up screen.

Women aged 72 to 79 will receive a letter providing clear information on what to do next if they want to have a screen.

These women, aged 72 to 79, will be asked to contact the helpline.

Women, aged 70 to 79, currently registered with a GP, who do not receive a letter from PHE can be assured they are not affected and do not need a catch-up screen.

Q: How many women have been affected by the scandal?

Women in England between the ages of 50 and 70 are currently automatically invited for breast cancer screening every three years.

Q: Who is eligible for compensation?

A: Mr Hunt made clear in his comments in Parliament that any case where the missed scan is established as a ‘likely cause of death’ would be eligible for compensation.

Previous negligence cases over cancer diagnosis have led to payouts of between £65,000 and close to £1million.

Q: What will prevent something like this from happening again?

A: The Health Secretary has ordered an independent inquiry to find out exactly what went wrong, how many people died and who is entitled to compensation. He has promised the Government will be ‘transparent’ about what went wrong.

The review, to be led by the chair of the Macmillan Cancer Trust and chair of the Royal Marsden Hospital, will take around six months.

‘Why didn’t they pick up that I hadn’t had a mammogram? They obviously knew about it for some time and they shouldn’t have covered it up for so long.

She told the Telegraph: ‘The whole journey I went on, the traumatic journey, all the treatment may never have had to happen’.

NHS chiefs are in the dock today over a breast cancer screening blunder that may have cost 270 lives.

Families demanded to know why officials took almost a decade to spot the disastrous IT error.

It was finally detected in January but made public only yesterday – four months on.

In a dramatic statement to the Commons, Jeremy Hunt said the failures meant 450,000 women were not invited for routine mammograms between 2009 and early 2018.

The Health Secretary said up to 270 women could have died because their breast cancer was detected too late – or not at all.

He apologised to affected families and launched an independent inquiry.

300,000-plus women will now be invited to an urgent scan and face an anxious wait to find out if they have cancer.

Unfortunately some have already had the bad news that they are seriously ill after discovering lumps themselves.

Mauveen Stone, who was diagnosed with breast cancer in August, claims doctors said she had ‘slipped through the net’.

The 84-year-old from Yeovil in Somerset had her last screening in 1995 when she was 62 and was given the all-clear.However, she was never again invited to another screening or her final routine scan when she turned 70.

It was only last year when she discovered a lump in her breast that she sought a check-up and doctors discovered a slow-growing cancer.

The former pub landlady and great-grandmother had to undergo surgery to remove four lymph nodes.

‘The doctors were surprised that my last screening had been in 1995. They said I must have slipped under the net,’ the mother of five said.

‘If I was invited for a screening I most definitely would have gone like I did in 1995. I do not know why I did not get any more letters. I have been at the same address since.

‘It was not something I thought about until I felt the lump. As my cancer was slow growing I don’t know how long it has been present or if it would have made a difference if I went earlier.

‘But it may well have been spotted earlier if I had been sent the invitation. I was very lucky it was slow growing.

Brian Gough, whose wife Trixie died of breast cancer after missing out on a scan, said the situation was devastating.

‘I’m amazed that it has taken them the best part of a decade to spot the problem,’ he added. ‘It’s extraordinary.’ 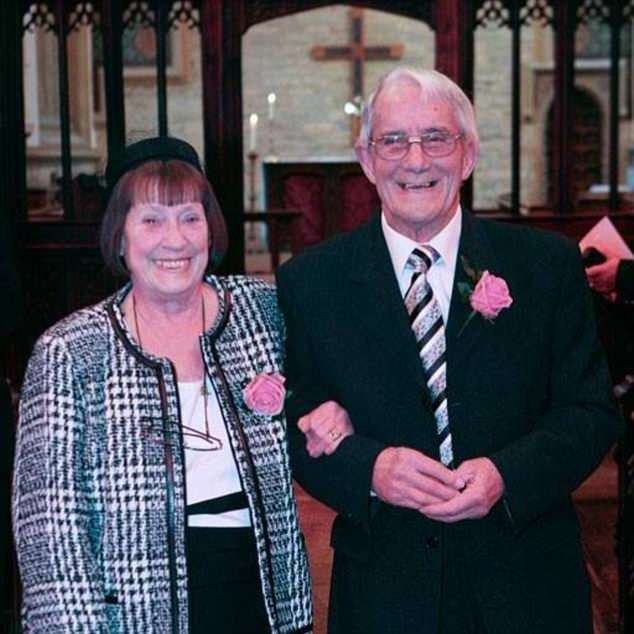 Mauveen Stone (pictured with husband John) , who was diagnosed with breast cancer in August, claims doctors said she had ‘slipped through the net’. She too may be eligible for compensation 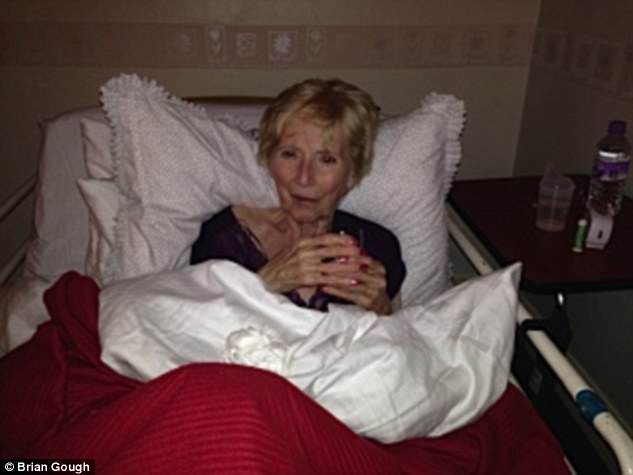 Trixie Gough, pictured in the days before her death in 2015, is among 450,00 women who never got a final cancer scan that may have saved her life after a ‘colossal’ NHS IT failure

Brian Gough’s wife Trixie, from Norfolk, pictured together before she fell ill, says he only found out about the scandal today while watching TV

Mrs Gough failed to receive the notification to make an appointment for screening by the time she was 71, her husband said.

HOW WAS THE IT GLITCH DISCOVERED?

The AgeX trial was set up in 2009 to find out whether cancers could be diagnosed with extra screenings ‘without undue harm’ in those aged 47 to 49 and 71 to 73.

Around 65 breast cancer units across the country then recruited women from these age groups with the computer programme supposed to select half at random to be given the extra screening.

But a computer glitch that was in the system from the start of the trial meant a large number of the older group had scans cancelled without ever knowing they were going to be arranged.

Once the Oxford researchers discovered the error, it soon emerged that the same mistake had affected women in the entire screening programme.

In October 2010 she found a lump in her breast and immediately saw her GP who sent her for a scan and she was diagnosed with breast cancer.

She had surgery followed by radio therapy and chemotherapy but after two years the cancer returned and she again went through a period of chemotherapy and blood transfusions.

The disease spread to her other organs and she lost her life on December 28 2015.

‘We worked all our lives and this was the time we wanted to enjoy together. That’s not possible now. She’s gone and I live alone,’ Mr Gough said.

‘It’s been very painful going over this again but she was a wonderful, brave, uncomplaining wife for almost 56 years and she is still missed enormously by all of the family’.

The ‘computer algorithm failure’ was traced back to the start of an Oxford-led trial aimed at extending breast screening to older women.

The error meant an estimated 450,000 women aged between 68 and 71 were not invited to their final screening appointment. As the scale of the scandal became clear:

Launched in 1988, the NHS’s breast cancer screening programme has been credited with saving thousands of lives through early detection. All women aged 50 to 70 are meant to be invited for mammograms, which are X-rays of their chest, every three years.

Officials at Public Health England said this was due to an ‘algorithm’ problem, a ‘rule’ built into the computer program, which accidentally cancelled the invitations.

It is likely to have been triggered by the Oxford-led trail launched in 2009 and aimed at extending screening to women aged 71 to 73.

To make matters worse, some local health trusts were not aware that they should have been inviting women aged 68 to 71 for screening.