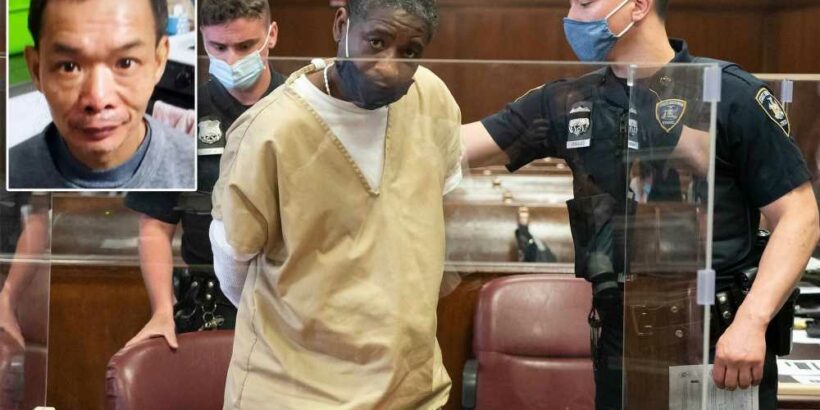 ‘I want to talk’: Man accused of biting off Asian man’s fingertip wails in court hearing

Hate crime in the city is way up, skyrocketing by 139 percent this year, NYPD data show.

Cops say they’ve investigated 320 reports of possible bias attacks through June 27, up from 134 incidents during the same period in 2020.

Offenses against Asians surged by 400 percent, to 105 reported cases this year from 21 last year.

Anti-Semitic assaults went up 69 percent, to 113 incidents this year from 67 last year.

There were also 11 hate crimes against whites, an increase from four in 2020; five incidents involving Muslims, up from two last year; and four offenses against Hispanics after none last year, the data shows.

In addition, the NYPD reported 31 hate crimes motivated by sexual orientation this year versus nine last year, a 244 percent increase.

“There’s no law and order anymore,” said a 26-year-old Upper West Side woman, who told The Post she and a group of fellow Jewish students were targeted outside Central Park on June 12.

The woman said she suffered a concussion after unidentified masked thugs hurled eggs at her group — “three modestly dressed women” and “three young men with yarmulkes” — at 92nd Street and Central Park West around 8:30 p.m.

“We were walking, everything was fine. We turned onto 92nd and right under the scaffolding of this building [at 322 Central Park West], I just felt like a rock hit the back of my head.

“It was like, ‘Oh my god,’ and so I kept running. I went into flight or fight response,” the woman recalled. “I was in shock.”

She said she has left the city and is staying with family in New Jersey.

“There’s been just a severe rise in anti-Semitism incidents,” she said. “Yes, they only threw eggs, but it’s the stepping stone for them to do something greater.”

She railed: “Crime needs to be taken more seriously in the city. We need to stop with this whole defund the police movement and get the city back to what it used to be.”

The huge uptick in anti-Asian incidents comes amid assaults on Asian-Americans over the Covid outbreak in Wuhan, China..

In April, Yao Pan Ma, 61, was stomped into a coma in East Harlem. His wife begged police to bring her husband’s attacker to justice and told The Post she feared for her own safety amid the surge in anti-Asian attacks.

Ma was collecting cans to help the family make ends meet along Third Avenue and East 125th Street when a man struck him from behind, knocked him to the ground and kicked him in the head at least six times — all caught on video.

“Please capture him as soon as possible and make him pay,” Ma’s wife of 31 years, Baozhen Chen, 57, told The Post in Mandarin through a translator,

Even law enforcers are not immune.

On June 5, an irate man was caught on camera going on a racist tirade against an Asian NYPD officer clad in riot gear as protests raged in Washington Square Park.

A suspect was arrested by the feds Friday, according to an FBI spokesperson.

Shermaine Laster, of Brooklyn, was nabbed at JFK Airport on an arrest warrant filed in the Northern District of Texas, charging him with being a felon in possession of a weapon, the spokesperson said.