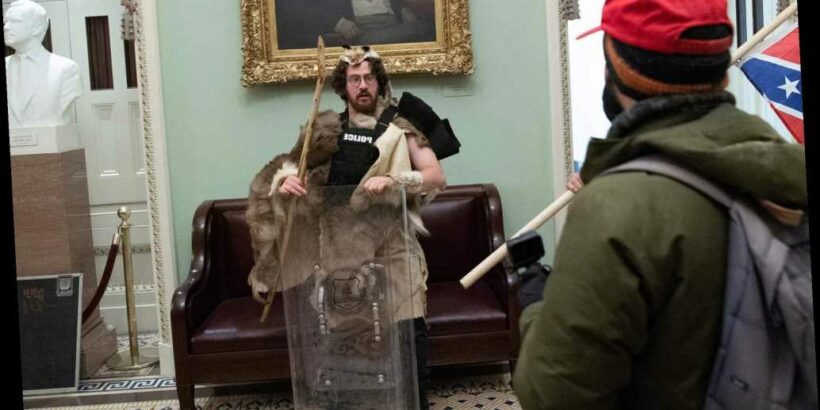 Trump tells his supporters to go ‘home in peace’

Biden calls storming of Capitol an ‘unprecedented assault’ on democracy

A Brooklyn man who stormed the US Capital with a wild mob — forcing the building into lockdown Wednesday — told the Post he did it because “the election was stolen.”

Wearing a bizarre fur costume and holding a police riot shield he says he “found,” the demonstrator cited theories about voter fraud as a reason for disrupting the certification of the 2020 presidential election.

“We were cheated. I don’t think 75 million people voted for Trump — I think it was close to 85 million,” the protester, who gave the name Aaron, told The Post while standing inside the Capitol building. “I think certain states that have been red for a long time turned blue and were stolen, like New York.”

He added, “[I did it] to express my opinion as a free American that this election was stolen.”

But as protesters — some of them armed — breached the Capitol, he claimed Congress members shouldn’t be frightened.

“[They] shouldn’t be afraid; they should get the courage to do their duty to examine the fraud and maybe delay the election,” said the protester, who was also wearing a bullet-proof police vest.

He added, “We [shouldn’t] rewrite the law because of COVID. It’s not ‘Give me liberty or give me death’ — but COVID.”

Asked how he got the United States Capitol Police riot shield, he said he, “found it on the floor.”

His comments followed a showdown — with police guns drawn — between cops and protesters outside the building Wednesday,  according to pool reporters.

At least one person was shot inside the building, according to multiple reports.

For weeks, President Trump has spouted claims that the election was “stolen” without proof.