REVEALED: Female anti-Trump protester, 24, who spat in a cop’s face in NYC and shouted ‘f*** you fascist’ was an intern for high-ranking Democratic Congressman Jerry Nadler

The foul-mouthed female protester who was arrested Wednesday for spitting in the face of an NYPD officer once interned for a high-ranking House Democrat.

Devina Singh, 24, spent about a month in 2018 working as a social work intern for U.S. Representative Jerrold Nadler, who chairs the House Judiciary Committee, the Daily News reported.

Singh ‘did not complete the internship and left shortly after the internship started for personal reasons,’ Nadler’s district director, Robert Gottheim, told the News. 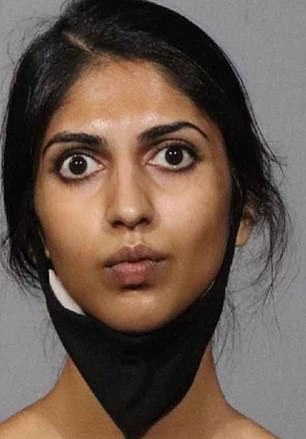 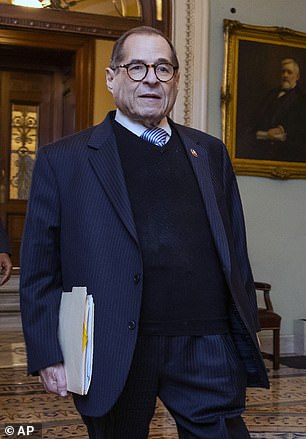 Devina Singh, pictured, was arrested on Wednesday night after spitting in a police officer’s face. For about a month in 2018, Singh was a social work intern for Democratic U.S. Representative Jerrold Nadler, who represents Manhattan’s Upper West Side

Gottheim did not elaborate further on why she left prematurely after starting in September 2018.

Nadler represents Manhattan’s Upper West Side and was reelected Tuesday.

Singh, of Brooklyn, was among the 57 people arrested in New York City on Wednesday night after she was filmed in Manhattan’s West Village neighborhood screaming ‘f**k you fascist’ at an NYPD officer before spitting in his face.

Footage of her spitting at the officer, which went viral on Twitter, was immediately condemned by the NYPD and police unions. 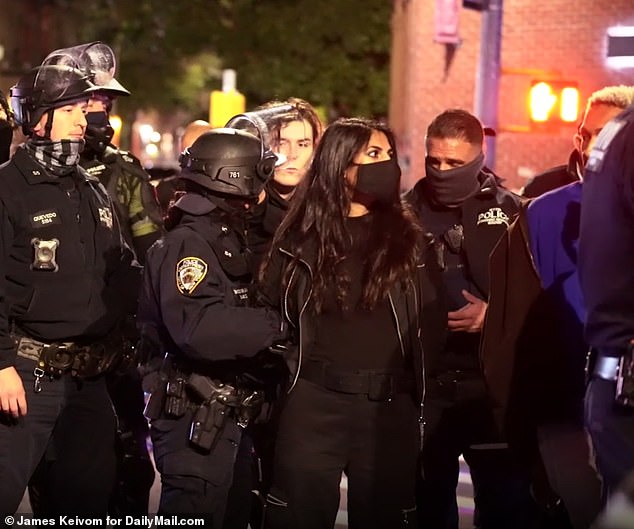 Devina Singh, 24, was filmed yelling ‘f*** you fascist’ at an officer in Manhattan on Wednesday night before spitting into his face. Singh, pictured above, was one of more than 50 people arrested during a night of unrest in New York 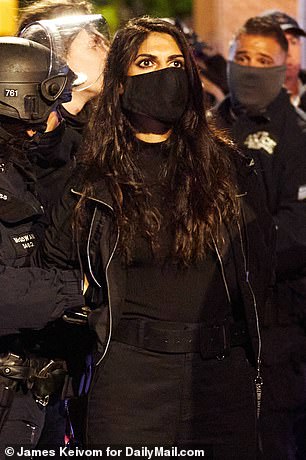 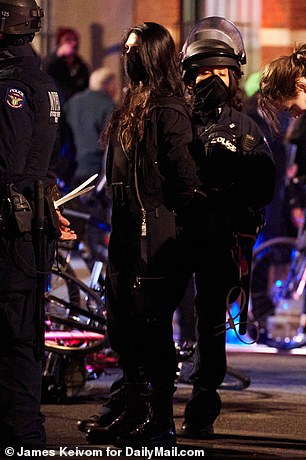 Singh, of Brooklyn, said before she was arrested, a cop slammed into her with his bike, causing her to fall. Her arm was broken during the course of her arrest, she said. Singh was charged with obstruction of governmental administration

‘Actions like this will not be tolerated. Agitators who commit these acts will be arrested,’ the NYPD tweeted alongside the video.

After the incident, Singh was thrown to the ground and arrested.

Singh told Gothamist Thursday that before her arrest, she was roughed up.

While Singh was walking on Seventh Avenue, she said, a Strategic Response Group officer slammed into her with his bike and caused her to fall. 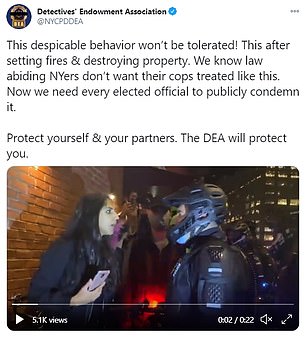 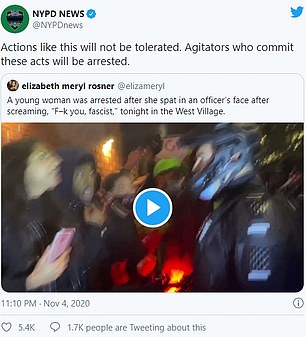 Footage of her spitting at the officer, which went viral on Twitter, was immediately condemned by the NYPD and police unions. ‘Actions like this will not be tolerated. Agitators who commit these acts will be arrested,’ the NYPD tweeted alongside the video 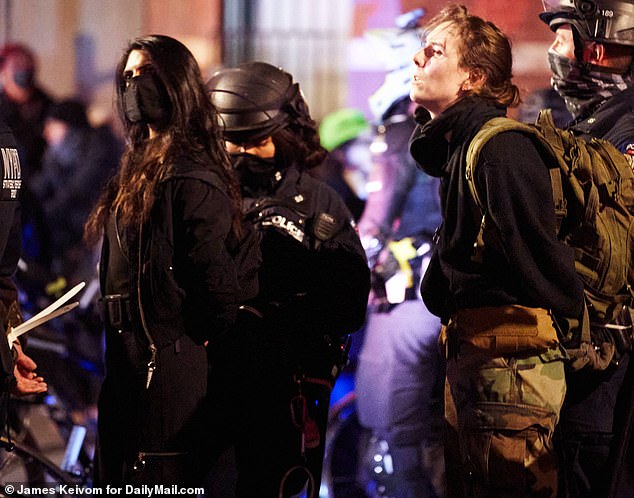 Singh, pictured left, was one of more than 50 people arrested during a night of unrest in New York

After being filmed spitting and screaming at a cop, she said, police dragged her headfirst over a line of bikes, and she fell hard onto her elbows.

In the course of her arrest, her arm was broken, she said. At Police Headquarters, she complained of pain and was taken to a hospital.

Singh provided Gothamist with a photo that purported to show her arm in a cast.

‘I stand by calling them fascists,’ she told Gothamist. ‘It was a peaceful protest until [NYPD] people showed up.’ 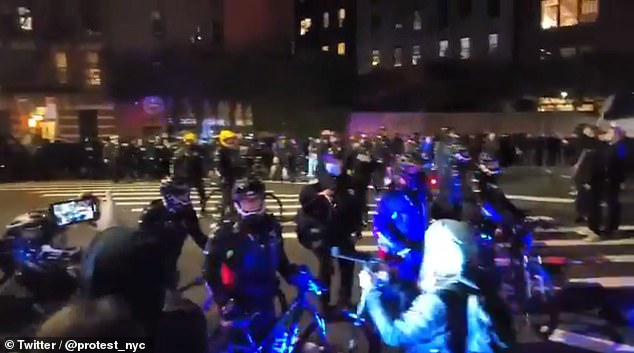 Singh was released Thursday morning and got a desk appearance ticket for Obstructing Governmental Administration.

Police did not immediately respond to Singh’s version of the events.

Singh, who’s from Schwenksville, Pa., lost a bartender job as a result of the pandemic, Gothamist reported.

She was also taken into custody September 18 for jumping on a cop’s back at Washington Square Park, according to the Daily News. She has a December 14 desk appearance for that case. 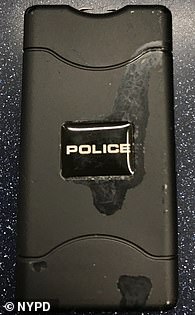 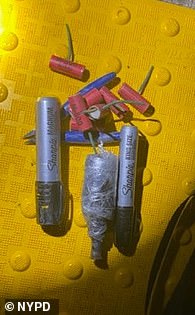 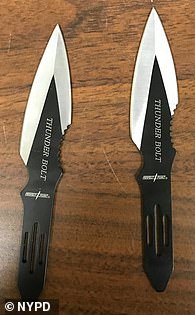 The department said officers recovered a knife and a stun gun, spray paint and M80 firecrackers following the arrests in Manhattan on Wednesday night

On October 27 she was arrested among demonstrators who were spray-painting graffiti and breaking windows in Downtown Brooklyn, the News reported.

Police said the unrest on Wednesday night began with peaceful demonstrations urging officials to ‘count every vote’ in the presidential election, after President Trump sued to stop votes being counted in key swing states where he could lose.

The NYPD said that as day turned into night, the protest was ‘hijacked’ by aggressive groups who lit fires before skirmishing with officers, throwing garbage and eggs at them. 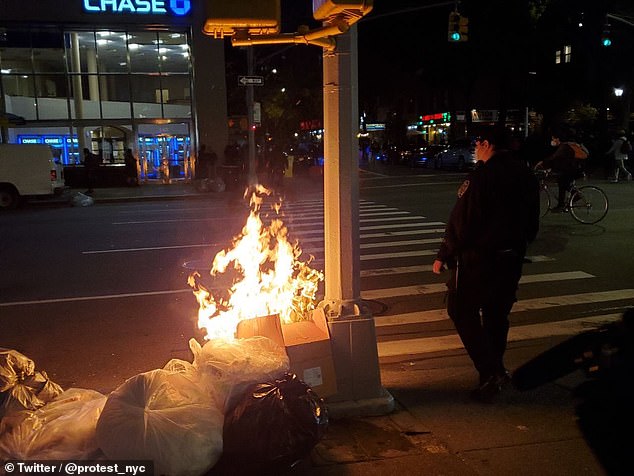 Assistant Chief Stephen Hughes was punched in the face while helping arrest a protester, according to the Daily News.

Police said they recovered a stun gun, two knives, and M-80 firecrackers during the demonstrations.

Protesters blamed police, who massed in riot gear by the hundred, for instigating clashes by swinging batons and cycles at demonstrators seemingly at random.

A total of 57 people were arrested.