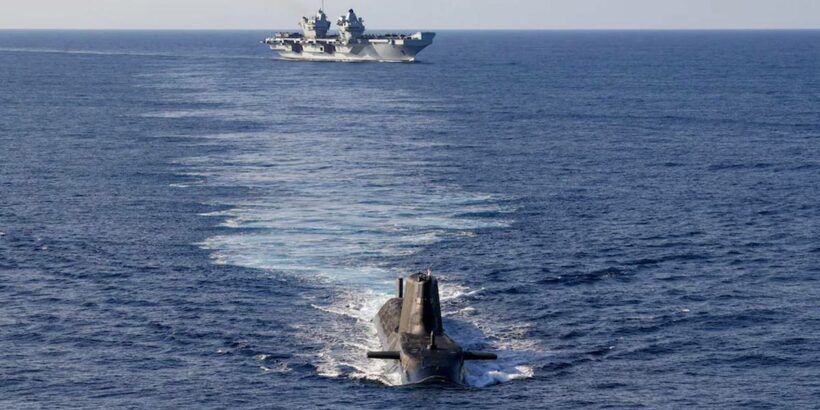 Britain, the United States and Australia have agreed a landmark security pact to share military technologies, starting with a plan to help Canberra build nuclear-powered submarines.

It marks a thinly veiled attempt to counter China’s growing military prowess and reach, although mention of Beijing was avoided in the formal announcement of the partnership.

New Zealand is not involved in today’s announcement, despite being part of the Five Eyes intelligence grouping with the US, Britain, Australia and Canada.

The British Government said the alliance was designed to “protect and defend our shared interests in the Indo-Pacific” by bolstering the development of joint defence capabilities.

Labelled AUKUS, and pronounced “Orcus”, the formal agreement will be signed by Joe Biden, Boris Johnson and Scott Morrison next week when the British and Australian leaders are in the US for the United Nations general assembly.

The centrepiece of the pact is a plan to share nuclear propulsion technology to help the Royal Australian Navy build new attack submarines. These will have greater range than the ageing Collins-class diesel-electric boats that it operates at present.

An 18-month feasibility study will now commence, with the timeframe for the delivery of the submarines yet to be decided.

The move risks igniting a diplomatic row with France, as Canberra prepares to walk away from a beleaguered £47.6 billion deal with French shipbuilder Naval Group to pursue the plan.

The Australian government has been at odds with the French defence giant over the design and escalating cost of the 12 diesel-electric submarines ordered, according to reports.

On Wednesday night, Johnson declared Britain, the US and Australia were “natural allies” with shared interests and values.

“This partnership will become increasingly vital for defending our interests in the Indo-Pacific region and, by extension, protecting our people back at home,” he said.

A government source said Britain’s manufacturing base, America’s technological expertise and Australia’s geographical location at the intersection of the Indian Ocean, Pacific Ocean and Southern Ocean meant the three nations were an obvious fit for deeper defence cooperation.

The insider added that the pact was “a very, very big deal in terms of international affairs” and had taken around six months to negotiate.

It also underscores the UK’s so-called Indo-Pacific tilt, a core theme of the Prime Minister’s Integrated Review that reset the nation’s foreign and defence policy earlier this year.

While the pact is primarily security-focused, it is expected to entail industrial benefits for the UK, leading to the creation of new high-skilled jobs.

Britain has six decades’ experience of building and operating nuclear-powered submarines, with key manufacturing bases at Rolls Royce’s plant near Derby and BAE Systems in Barrow.

Mandarins are confident the move will not breach Britain’s nuclear non-proliferation obligations, because it only involves the transfer of knowledge about nuclear propulsion systems rather than nuclear weapons.

The pact is part of Biden’s attempt to refocus the attention of the US and its allies on China.

In extricating the US from Afghanistan, the president has repeatedly said they should be dealing with the “threats we face today, not yesterday’s threats”.

Biden views US relations with China as a long-term struggle between autocracy and democracy.

He wants to build a coalition of allies to counter the rapid technological progression of China’s military, while also telling Beijing that they must not “veer into conflict”.

US military and intelligence officials fear China has stepped up its timetable for taking over Taiwan, which could lead to a catastrophic war.

In a recent, disastrous, classified Pentagon war game, which involved hundreds of senior US military personnel, American forces were crushed by China in a battle over Taiwan after US information systems were knocked out.

Following the war game, America’s second-most senior military commander disclosed plans for British soldiers to be given access to a US “combat cloud”.

Under the plan, allied soldiers would be able to use their personal biometrics to access real-time US intelligence in a conflict.

Collaboration on sonar technology is likely to be a high priority for the new three-nation defence alliance.

Other undersea capabilities to be developed could include hydrophones placed on the seabed to listen for passing submarines, as was used throughout the Cold War with the sound surveillance system in the so-called Greenland-Iceland-UK gap.

The Telegraph understands the Malacca Strait, between Malaysia and Indonesia, and the Timor Sea, between Indonesia and Australia, are thought to be of great interest to naval chiefs as they are routes any Chinese maritime force would have to pass to break into the Indian Ocean.