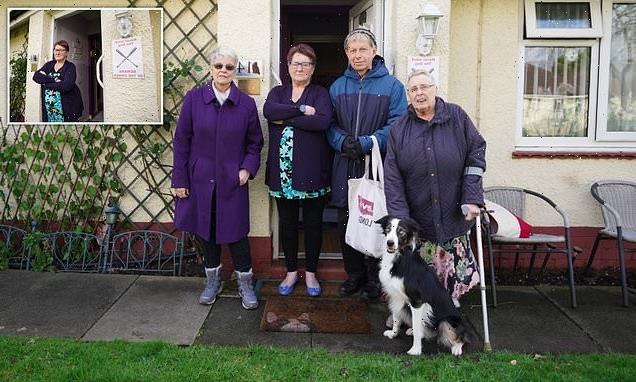 Pensioners REFUSE to leave their Manchester bungalows which housing association want to demolish as 72-year-old warns: ‘They’re not taking my bloody home away from me…over my dead body’

Elderly residents in a block of bungalows in Trafford have refused to leave their homes which are set to be demolished to make way for new ‘high-quality’ properties.

The residents on Highfield Close in Stretford are refusing to leave and uproot their homes and community.

Out of the almost 40 bungalows on the road, 18 are empty and gathering dust.

Trafford Housing Trust, which owns the homes, claim the bungalows are situated within a ‘high flood risk zone’ and built with a ‘solid floor construction that has created severe damp and mould issues’.

The association said they want to demolish the properties – and re-home the tenants – in order to build ‘new high-quality homes’.

But residents say they have had no issues with flooding or mould and have no intentions of moving.

Lynda Mawdsley, 72, said: ‘When I moved here, this was supposed to be my last port of call. Instead, it feels like I’m now waiting to be kicked out.

‘It’s like they’re either waiting for us to die, or for someone else to die so we can have their homes – despite having perfectly good homes already.’

‘They’re not taking my bloody home away from me, over my dead body. I’m not leaving.’ 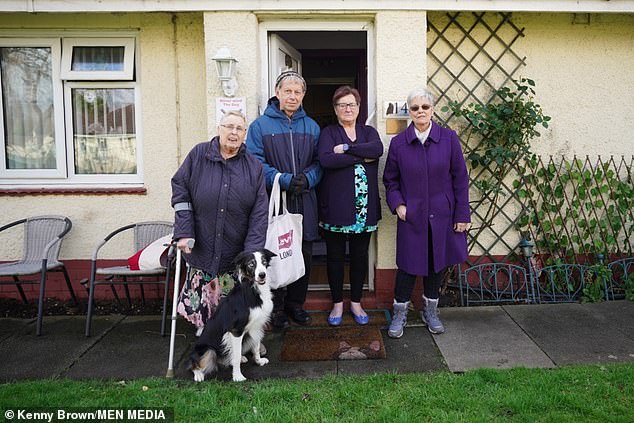 Elderly residents on Highfield Close in Stretford, have hit out at Trafford Housing Trust’s plans to knock down their bungalows in order to build ‘high-quality’ properties in their place instead 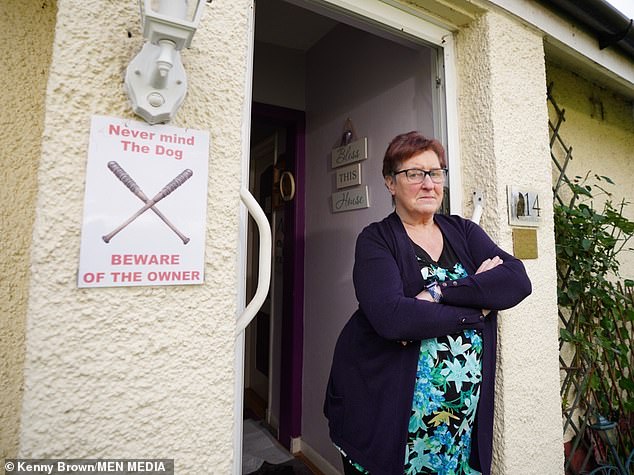 Lynda Mawdsley, 72, has lived here for 18 years and insists that she is not leaving despite plans

Lynda, who lives with five cats, has lived on the road for the last 18 years. She occupies the bungalow that her mother lived in for nine years before her.

‘These bungalows were built in 1947 and it’s never, ever flooded here,’ Lynda said.

‘There are a couple of bungalows here that have some damp issues but I’ve lived here 18 years and never had any damp.’

Lynda said she first heard rumblings that her home was in jeopardy five years ago when a worker mentioned in passing that they’d heard that six of the bungalows were to be demolished.

After contacting the housing trust on numerous occasions, she eventually found out it was not just six bungalows being bulldozed – it was the entirety of them.

‘I was totally bewildered,’ Lynda said. ‘They’re not taking my bloody home away from me, I’m not leaving.’

Lynda said residents were officially told about the plans following a meeting with Trafford Housing Trust.

‘We’re not just a community, we’re a family. We look after each other here,’ she explained.

‘When they said they had decided to demolish them, I just burst out crying.’

Kathleen Taylor, 74, moved to Highfield Close 18 years ago. ‘Since that meeting, I’ve had a constant headache,’ Kathleen said. ‘I just feel tension all the time. I’ve never known stress like it before.’

In a letter to residents, Trafford Housing Trust said they intend to demolish the homes ‘within the next seven years’. 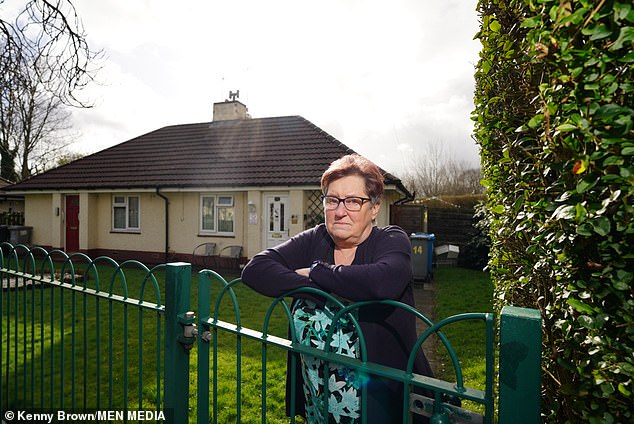 ‘It’s like us being in limbo,’ Kathleen added. ‘We don’t know what they’re doing or what’s happening.

Trafford Housing Trust say they will help residents find new accommodation and also provide a £2,000 ‘discretionary disturbance payment’ to be used towards the cost of new furnishings, decoration and services like post redirection at their new home.

‘The more I think about it, the more I realise it’s just not enough,’ Kathleen explains.

‘My flooring cost nearly a grand and I’ve spent nearly £5,000 on my garden to make sure it’s suitable for my dogs.

‘That £2,000 is going to go nowhere, but we don’t want compensation. We just want to stay in our homes.’

Brenda Booth, 77, moved to Highfield Close five years ago- and was the last person to move to the street. 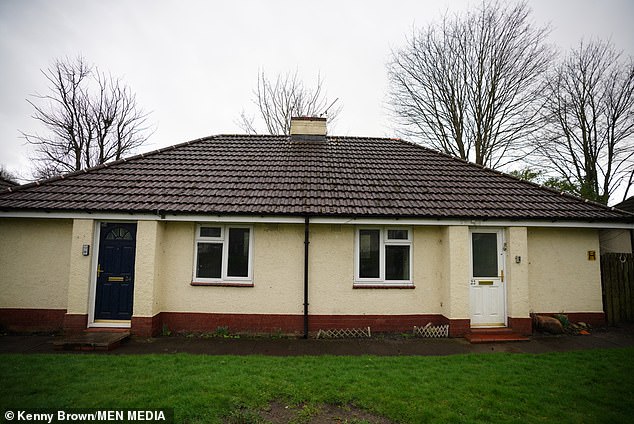 Out of the almost 40 bungalows on the road, 18 are currently empty and gathering dust

‘We call this God’s Waiting Room or The Green Mile. We’re all pensioners here so we all joke that we’ll be leaving here in coffins – we just didn’t expect to be going out in removal vans instead,’ she said.

‘They are absolutely lovely bungalows – I don’t understand why they’re so determined to get rid of them.’

The residents at Highfield Close say they are determined to fight for their ‘pride and joy’ and hope that Trafford Housing Trust will reconsider their plans.

Michael Keogh, 79, who moved to Highfield Close 25 years ago, said: ‘They could do with showing us some respect and dignity. These are our homes.

‘There comes a time in one’s life where you don’t feel threatened anymore. We’re not going down without a fight.’

The residents have been seeking advice from Stretford councillors Jane Slater, Tom Ross and Steve Adshead, who have been in contact with Trafford Housing Trust.

‘If the bungalows are demolished, a whole community will be dispersed,’ the three councillors said in a joint statement. 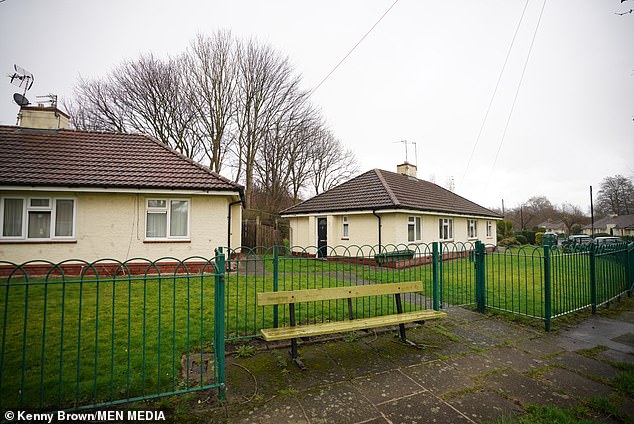 Trafford Housing Trust, which owns the properties, say they want to re-home the tenants

‘We have spoken to THT about the proposals and their board had already agreed to demolish the bungalows prior to the start of the discussion with residents. It’s not a consultation as the decision had been made.

‘We would like to see the bungalows refurbished and the ability for residents who wanted to access bungalow accommodation to still be able to. We need well maintained social housing in Stretford.’

Trafford Housing Trust said they were working closely with residents to understand their individual housing requirements, including financial support.

Graeme Scott, Executive Director of Development, said: ‘Our customers will always be our number one priority, and sometimes we have to make difficult decisions to protect their health and well-being.

‘We appreciate that leaving Highfield Close may prove a difficult move for some, and we are working closely with customers at their own pace to understand their housing requirements to ensure their needs are accommodated.

‘We are already providing priority access to new homes for the majority of customers on Highfield Close that are happy to move. We want to ensure that we continue to offer quality homes of choice that meet the housing standards of the future and that help to tackle the housing crisis.’