‘Obsessed’ rapist, 21, who told woman ‘This is going to be the worst night of your life’ then imprisoned her in his house for two days and ‘used her as a sex slave’ is jailed for 13 years 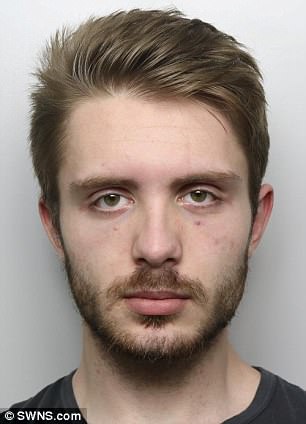 Thomas Patton, 21, threatened to hurt the woman’s family and damage their property if she did not agree to meet him

A knife-wielding rapist who kept his victim prisoner in his house for days as a ‘sex slave’ has been jailed for 13 years.

Thomas Patton, 21, of Deighton, West Yorkshire, who was ‘obsessed’ with his victim, threatened to hurt her family and damage their property if she did not agree to meet him.

The woman went to his house after a local food and drink festival to talk to him, but once inside he locked the door and snapped her mobile phone in half.

Patton, who had previously told the woman she was ‘nothing but a dog’, slapped her repeatedly and even brandished a knife before telling her he was going use her as a sex slave.

He was jailed yesterday at Leeds Crown Court after being found guilty last month of five charges of rape, one of false imprisonment and one of assault.

In a victim impact statement, the woman said she was now anxious, struggled to sleep and has been disowned by her father, who had rescued her from the house.

Stephen Wood, prosecuting, described Patton as ‘obsessed’ and ‘infatuated’ with his victim, who cannot be identified for legal reasons. 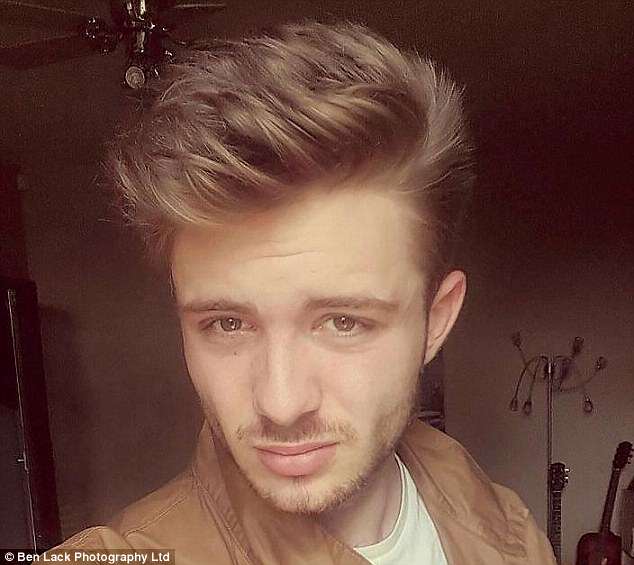 During the weekend where he trapped her in the house with the doors and windows locked, Patton raped her repeatedly and assaulted her.

Mr Wood said: ‘He told her he would rape her in the a*** and use her as a sex slave.’ Patton also shouted at the victim that he wanted her ‘to be happy’.

Mr Wood added: ‘Effectively she was his property, to do with as he wanted.’

Richard Canning, defending, agreed that his client was obsessed and said that he clearly has issues with the definition of rape.

He said that during cross-examination, Patton said: ‘How can it have been rape if there was no violence?’

Mr Canning reminded the judge that the jury found him not guilty of two additional counts of rape in relation to earlier alleged offences against the same woman.

Mr Canning said that when the victim’s father came to the house Patton told him they were going out for a picnic and tried to talk to him.

Summing up the case, Judge Mushtaq Khokar said: ‘There was a certain amount of threats made against her mother – that he would put through her windows.

‘She went to attend the food and drink festival in Huddersfield and he promised her that if she came to see him he would not pester her like he had been doing.

‘She was assured she would not be alone with him, there would be others there. She was on the phone and could hear people in the background.

‘She arrived at the address and it wasn’t long before the others took their leave. She wanted to leave but he locked the door. And so, a nightmare of two days began when that happened.

‘Because, having locked the doors, he told her that she was not going anywhere and he threatened her that this was going to be the worst night of her life: ‘I’m just going to beat you and rape you’. He just kept repeating that.’

The judge added: ‘He was remanded in custody after his conviction and this morning I am told that he had refused to come out of his cell for the purposes of this sentencing hearing and therefore I am proceeding in his absence.’

Judge Khokar said that over the course of the weekend, Patton’s mood ‘swung from one extreme to the other’.

After being locked in the house the first night, his victim banged on the windows and screamed to attract attention, but Patton ran over and grabbed her by the mouth and nose, put his arm around her neck and told her to shut up.

When she told him that she did not want him, Patton replied: ‘Wrong answer.’

Patton grabbed her hands and made her hit herself in the face. She was petrified, crying her eyes out, and he picked up a knife from the mantelpiece.

She was screaming for him to calm down. He was telling her she should slit her throat, but she managed to calm him down and he forced her to kiss him and tell him she loved him.

The next morning, he told her that if she performed a sex act on him that it would calm him down – before having unprotected sex.

When the victim went for a shower, Patton came in and raped her again. The judge said the victim ‘must have been full of fear and trepidation’.

On one occasion, Patton ripped her clothing before raping her.

On another occasion in the shower, he forced her to perform a sex act on him again. She had to bend down in order to do so, and suffered injuries on her knees.

Sentencing Patton to 13 years in jail, Judge Khokar said: ‘By the end of the weekend, she had been raped (in different ways).

‘She has been assaulted and kept inside and unable to communicate with anybody because her phone had been stolen and there was no landline in the house.

‘She says she was very upset at that time. Her impression was she was not going to get away from him if this continued. She started to busy herself in the house until she heard her father arrive at the door.

‘Given his young age, I am going to give him the benefit of the doubt and not say that he is dangerous.’

The judge said he deemed Patton a high risk to the victim, but not to the general public.

Patton was also made the subject of a restraining order but the Crown Prosecution Service did not ask for a sexual harm prevention order.

Patton, who had earlier pleaded guilty to criminal damage in relation to the mobile phone, claimed that the sex was consensual and that the woman ‘enjoys rough sex’.

Patton has previous convictions for criminal damage, theft and battery. The battery occurred in 2014 when he pinned his own mother to the floor by the neck and then punched her once in the face.

Speaking after sentencing, Detective Constable Shaun Lewis, of West Yorkshire Police’s Kirklees Safeguarding Unit, said: ‘Patton is a dangerous individual who subjected his victim to a sustained and horrendous ordeal.

‘Patton’s conviction for what can only be described as horrendous crimes has removed a dangerous, obsessed sexual predator from our streets.

‘It was evident that he had planned to commit these offences against the victim and if she had not been brave enough to come forward he would have continued to offend.

‘I would like to praise the victim, who has showed immense bravery throughout the whole criminal process and hope that today’s sentence allows her to get some closure to her ordeal.

‘She has been supported by specially trained officers since she came forward to the police to report the offences.

‘Fortunately serious sexual offences such as these which Patton committed are very rare within the Kirklees District, but when sexual offences do take place, our officers treat the victims with the utmost care and sensitivity.’