CHRISTOPHER BROOKER: Scandal of ‘killer’ wood burning stoves and the question – is the political class’s obsession with global warming rotting their brains?

The Government earned plaudits from the green lobby yesterday for its new plan to crack down on the craze for wood-burning stoves.

As the Mail reported on its front page, the stoves chuck out lethal pollution, particularly from wet wood, and contribute to thousands of early deaths from lung and heart disease.

But hang on! One reason Britain burns more wood than it has done for decades — a 2016 survey found 7.5 per cent of households in London burn wood — is that only recently, the Government and the greens told us burning wood to heat our homes was the best thing we could do for the environment.

Wood is ‘sustainable’, we were told. It gives off less CO2 than any other heating. It will help us save the planet and meet CO2 reduction targets under the Climate Change Act.

As a result of these persuasive arguments, about 1.5 million British homes have wood-burning stoves and 200,000 more are sold every year. 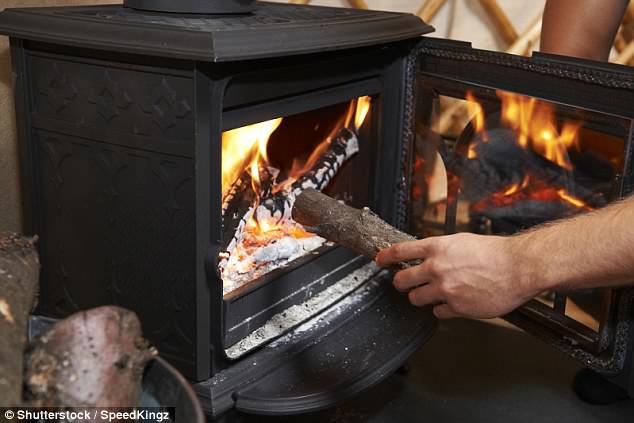 Given these horrific facts, why have governments in recent years made wood-burning such a core part of energy policy? For there is no doubt ministers have been desperate to encourage it. There is just one issue. Health problems apart, the whole thing is an economic disaster (file photo)

Now we learn that wood-burning is the single biggest source of tiny soot particles called PM2.5s — they are also emitted by burning coal and diesel — which go into our lungs and are said to be responsible for an estimated 37,800 premature deaths a year.

Given these horrific facts, why have governments in recent years made wood-burning such a core part of energy policy? For there is no doubt ministers have been desperate to encourage it.

There is just one issue. Health problems apart, the whole thing is an economic disaster.

Only last week we had a withering report from MPs on the Public Accounts Committee about the failings of something called the ‘Renewable Heat Incentive’, a scheme launched in 2011 by Chris Huhne when he was Secretary of State for Energy and Climate Change.

The idea was to offer lavish subsidies to businesses and homeowners to cut their ‘carbon emissions’, and save on energy bills, by centrally heating their premises by burning wood pellets. Participants could only qualify if they installed specific expensive renewable heating systems — as opposed to wood-burners bought by homeowners simply trying to be eco-friendly.

The MPs found that, although the scheme will cost taxpayers a staggering £23 billion in subsidies in the next 20 years, the high upfront costs meant take-up has been shamefully low.

Just 35,000 households have invested in it since its launch, while 6.2 million have installed very much cheaper gas heating over the same period.

The committee declared that the Government utterly failed to take account of the serious health risks posed by wood burning, while, thanks to the subsidies on offer, too many unscrupulous people had ‘gamed’ the system just to make money.

But last week’s report was far from the first time the Renewable Heat Incentive has given rise to a major scandal.

A version of the scheme — with even more lavish subsidies — ran so totally out of control in Northern Ireland in 2016 that it led to the downfall of the government there, sparking a political crisis that, 17 months later, is not resolved.

The crisis arose from the discovery that its subsidy bill had already hit £500 million and by 2020 was due to top £1 billion.

Some users of the scheme kept heating systems running flat out night and day because they made such a profit from the subsidy scheme.

But even this disgracefully wasteful affair is dwarfed by what has become one of the most controversial green energy schemes of all: the conversion of boilers at the giant Drax power station in Yorkshire from coal to wood pellets, costing us all £800 million a year in subsidies. 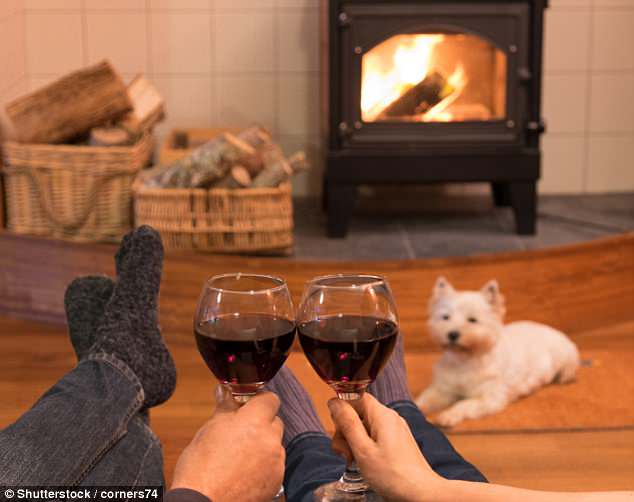 Millions of tonnes of wood pellets are now needed by Drax every year, and since it is impossible to supply that quantity domestically, vast amounts of pellets are shipped 3,500 miles to Yorkshire from the U.S., where forests are destroyed to supply them.

As with the Government’s endorsement of wood-burning stoves and its Renewable Heat Incentive scheme, the idea behind Drax’s conversion to wood pellets is that burning trees or ‘biomass’ is ‘carbon neutral’ because eventually new, CO2-absorbing trees will grow to replace the ones that have been felled.

Yet a series of studies has confirmed what should have been obvious. It takes decades to grow a mature CO2-absorbing tree to replace a CO2-producing tree that can be cut down in seconds. Far from cutting Drax’s CO2 emissions, the largest power station in Britain gives off even more CO2 than when it just burnt coal.

Even the most ardent green activist groups have protested that chopping down millions of acres of forest in America to fuel a system that ends up chucking out more CO2 is an absurd ecological disaster.

This was even endorsed in a report last year by Duncan Brack, who had been a special adviser to Chris Huhne when this scheme was first being discussed.

What makes it even more disturbing is what happened to Mr Huhne after he was forced in 2012 to resign for perverting the course of justice by lying over a speeding offence.

Scarcely was the former environment minister out of prison in 2013, having served only two months of an eight-month sentence, than he was given a new job by an old school friend as European Director of Zilkha Biomass, a U.S. firm that supplies, yes, you’ve guessed it, American-made wood pellets all over the world — though he denies any conflict of interest.

The bitter truth is that these fiascos caused by our obsession with wood-burning are just a part of a larger disaster that taints almost every green scheme governments have foisted on Britain in the quest to reduce carbon emissions.

Remember why the Blair government in 2001 encouraged millions of motorists to switch to driving diesel cars through offering tax subsidies. It was because Blair’s chief scientific adviser Sir David King had decided that diesel gives off much less CO2 than petrol.

Eventually, it turned out that the pollution (in the form of those PM2.5 particles and toxic nitrogen oxides) emitted by diesels posed such a serious health risk it could be causing thousands of premature deaths in Britain every year.

And so, with a screeching U-turn, all the tax incentives encouraging us to buy diesel cars were reversed and diesel drivers were penalised. In this week’s latest proposed measures, the Government plans to clamp down not just on wood-burning stoves, but also even further on diesel vehicles.

The real question is why do our gullible politicians constantly deceive themselves and the rest of us with their endless, ever-more costly ‘green’ schemes which turn out to be nothing of the kind and actually increase pollution?

It is all very well MPs coming out with yet another report on yet another green energy fiasco. But why is it always only after the damage has been done? Why can’t they properly evaluate these green initiatives before they happen?

The fact is that not one of these schemes comes into being without having been nodded through Parliament.

In that sense our MPs are as much a party to these disasters as the ministers who propose them.

It’s as if the political class’s obsession with global warming rots their brains — for which the rest of us have to pay a very heavy price.