Which posh nosh is worth the dosh? Ocado’s dumping Waitrose for M&S sparking panic in the shires. But we put both brands head to head and you might find it’s safe to come out of the larder after all!

They’re wailing into their quails’ eggs, choking over their ciabattas and weeping bitter tears onto the wagyu beef. Ocado, the deity of Middle England, has jumped ship. For millions, it is more than just an online delivery service — it’s a way of life. How could it?

For the past 19 years, it has been in a perfect partnership with Waitrose. But, in a dramatic shake-up, all that is about to change.

This week, Marks & Spencer — Waitrose’s main High Street rival — bought a 50 per cent share in Ocado. The £1.5 billion deal means that, from September next year, the delivery giant will ditch Waitrose products in favour of M&S food and drink. 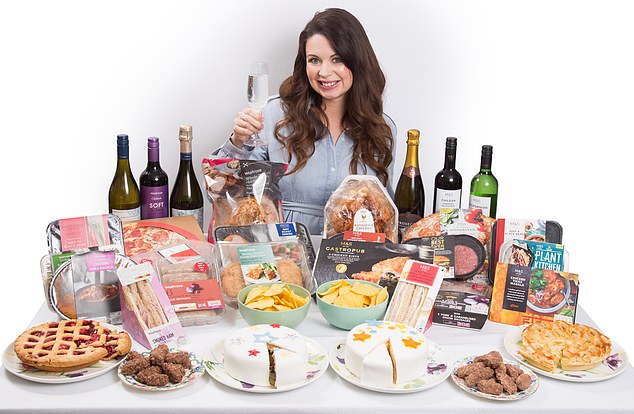 So just how do M&S staples stack up against Waitrose own-brand produce? From truffles to pepperoni pizzas, we put the two high-end outlets head-to-head in the ultimate taste test

While M&S chief executive Steve Rowe claims Ocado customers will benefit, as M&S products are cheaper than their Waitrose equivalents, well-heeled shoppers aren’t so sure, branding it a ‘shame’ and a ‘crisis’. ‘My mum’s in tears,’ wrote one online commenter. ‘She’s absolutely devastated.’ Luckily, loyal Waitrose customers will still be able to order from waitrose.com.

So just how do M&S staples stack up against Waitrose own-brand produce? From truffles to pepperoni pizzas, we put the two high-end outlets head-to-head in the ultimate taste test… 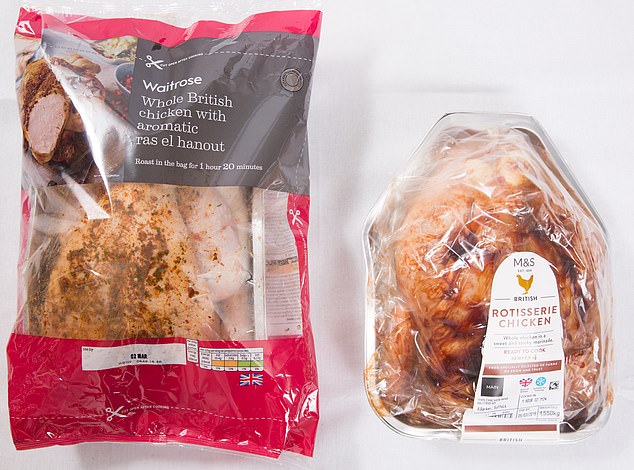 TASTE: Succulent and tender, with a hint of spice, this is delicious — and roasts in just 80 minutes. You can cook it in the bag, so there’s no mess and the juices are locked in.

TASTE: The chicken is sweet and caramelised on the outside, but — in the 98 minutes recommended on the packaging — the meat inside has dried out. Drenched in gravy, it’s just about palatable.

Winner: Waitrose, by a mile. Its chicken is cheaper, less calorific and tastes better. 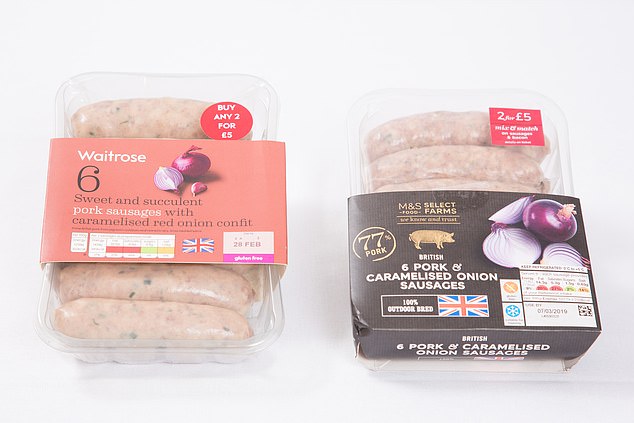 M&S sausages shrivel up when grilled, but they’re still a generous size and made of 77%  pork

TASTE: The sausages are fat, juicy and full of confit chunks… or is it gristle? They taste sweeter than I expected, and the onion almost overpowers the 80 per cent pork.

TASTE: These shrivel up when grilled, but they’re still generous-sized sausages, made with 77 per cent pork, onion and plenty of seasoning. Far better than your average supermarket banger.

Winner: M&S. You get more meat for your money. Flavour-wise they’re hard to tell apart.

Waitrose chicken kievs are hefty and stuffed full of garlicky butter. The breadcrumbs are made from individually baked loaves

TASTE: These are hefty, stuffed full of garlicky butter. The breadcrumbs — made from individually baked loaves, which seems unnecessary — are crisp and the meat is juicy.

TASTE: The creme de la creme of kievs, these are made with chicken breasts on the bone, which seems a real waste of breadcrumbs. They could be a little more generous with the garlic butter inside.

Winner: Waitrose. It’s smaller than the M&S version but nearly half the price and just as tasty. 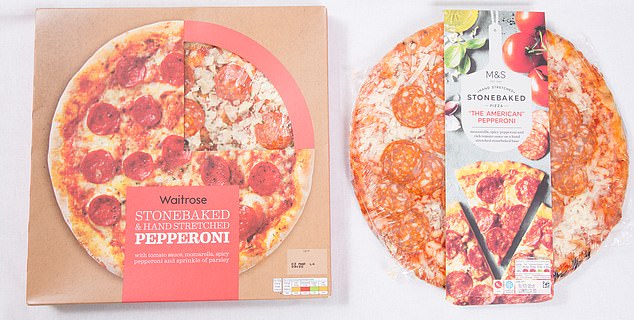 Smaller than it appears on the outside of the box, Waitrose’s pepperoni pizza is pretty average

TASTE: Smaller than it appears on the outside of the box, this is a pretty average pizza. The sprinkling of parsley on top is a nice touch, but the meat itself tastes bland and processed.

TASTE: The base is thin and crisp, the toppings are generous and the pepperoni is spicy. The cheese is spread right to the edges, too. 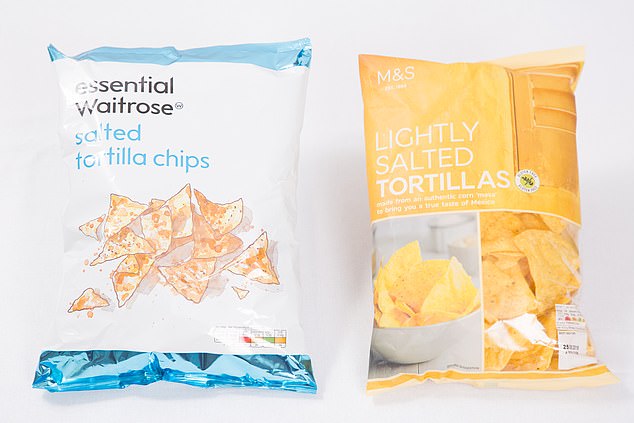 TASTE: There’s a generous portion of crisps in the bag, and they’re not too greasy. In fact, they’re incredibly moreish — before I know it, I’ve scoffed the lot.

TASTE: This is a smaller serving, and to my disappointment lots of the crisps in the bag are crushed. They are saltier than the others, and after a few mouthfuls I’m craving a drink.

Winner: Waitrose. Not only are they better value, but they taste more like posh nibbles than mass-produced snacks.

ROAST MEAL FOR ONE

For a roast dinner that’s ready in 20 minutes the Waitrose meal is hard to beat. The M&S portion is significantly smaller

TASTE: For a roast dinner that’s ready in 20 minutes, this is hard to beat. The meat is succulent, the potatoes are golden and fluffy, and there’s even a Yorkshire pudding.

TASTE: This takes 20 minutes to cook in the oven, or just three minutes in the microwave. But the portion is significantly smaller than the Waitrose offering, and it tastes like a bad school dinner.

Winner: Waitrose. You get what you pay for — the M&S meal is soggy and bland.

From M&S’ new ‘Plant Kitchen’ range their lasagne is tasty, indulgent and healthy

TASTE: Made from spinach pasta, vegetables, tomato and a creamy cheese sauce, this is a good lasagne. However, it could do with more seasoning. It also comes in a recyclable tray.

TASTE: This is from M&S’s new ‘Plant Kitchen’ range, meaning it’s suitable for vegans, too, with soya bechamel. It is tasty, indulgent and healthy.

Winner: M&S — its veggie and vegan dishes are generally top-notch. The lasagne is flavourful and comes out of the oven golden on top.

Unveiled last year, the Best Ever burger contains prime beef and a hint of bone marrow

TASTE: Plump, juicy and made from finely marbled Hereford beef, these are melt-in-the-mouth. When grilled, however, I’m shocked by the amount of fat that drips out.

TASTE: Unveiled last year, the Best Ever burger contains prime beef and a hint of bone marrow, which gives it a game-like flavour. The calories are hefty, but worthwhile.

There’s more of a kick to the M&S chicken tikka masala. It’s full of chunky chicken and tomato

TASTE: Billed as ‘marinated chargrilled chicken in a tandoori-spiced cream and tomato sauce’, this Indian classic sounds mouth-watering. The reality is a let-down: insipid sauce and barely any meat.

TASTE: There’s more kick to this, which is full of chunky chicken and tomato. It’s also less fatty, so I don’t feel guilty tucking in.

Winner: M&S. So good it could have come from my favourite local Indian takeaway.

The Waitrose meal is not as ‘rich’ or ‘intense’ as I hoped. There is plenty of beef, peppers, water chestnuts and spring onions

TASTE: This looks appetising, but it’s not as ‘rich’ or ‘intense’ as I hoped. There is plenty of beef, peppers, water chestnuts and spring onions.

TASTE: At the higher price point, and with all the extra calories, I was hoping for a decadent dinner. But the sauce is cloying, and the slices of beef are pitifully thin.

Winner: Waitrose, by a whisker. Both are pricey options, and neither lives up to expectations.

Waitrose’s is made with whole apples, blackberries and apple puree. It’s packed full of fruit, but is also very sweet

TASTE: Made with whole apples, blackberries and apple puree, this is packed full of fruit, but it’s also very sweet. Even the pastry lattice is dusted with demerara sugar.

TASTE: A deeper pie, filled with tart apple, this has a homemade feel to it — and I’m sure I could pass it off as my own. The pastry puffs up beautifully in the oven.

Winner: M&S, which just pips Waitrose on price, and triumphs in taste and appearance. 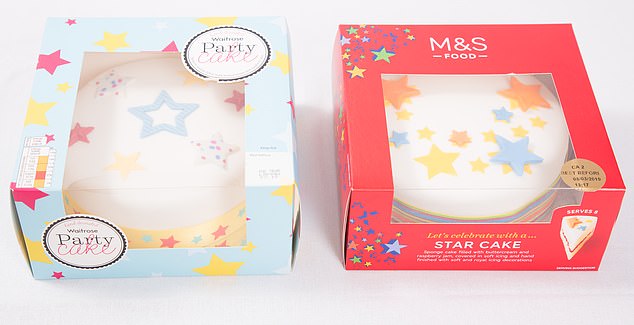 TASTE: The sponge is fluffy, and the icing melts in the mouth. It is packed with jam and cream, which squidges out of each slice.

TASTE: Much denser and more artificial-tasting, this would never pass muster on Bake Off. There’s barely any filling and the icing comes away at the sides.

Winner: Waitrose. Neither cake is cheap, but for a special occasion there’s a clear winner.

TASTE: Softer than expected, these are more like chunks of chocolate than truffles. There’s a generous coating of flakes over each one.

TASTE: These look identical to the Waitrose chocolates, but are chewier and slightly bigger. You also get 16 in a box, rather than 12.

AND THE OVERALL WINNER IS… M&S

Triumphing in nine out of 16 categories (including most of the alcohol ones above), it looks like M&S is a worthy replacement.

Long-serving Ocado customers have nothing to fear. For the most part, they’ll save on shopping bills — and end up with tastier food.

…and who’s the best for booze? 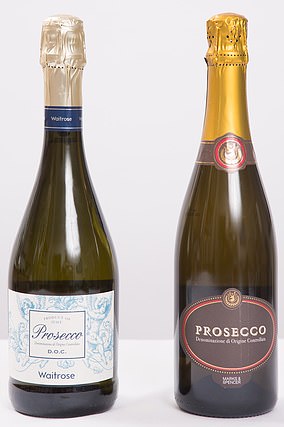 Smooth and easy to drink, there’s little to dislike about this prosecco from Waitrose’s upmarket Blueprint range

TASTE: Smooth and easy to drink, there’s little to dislike about this prosecco from Waitrose’s upmarket Blueprint range. It’s meant to taste of wisteria and apples, but is a little too sweet for me.

TASTE: This prosecco is dry, fruity and fresh. At just £8 a bottle, it’s very drinkable, and leaves me feeling refreshed rather than light-headed.

Winner: M&S. It’s the perfect fizz to mark a celebration. 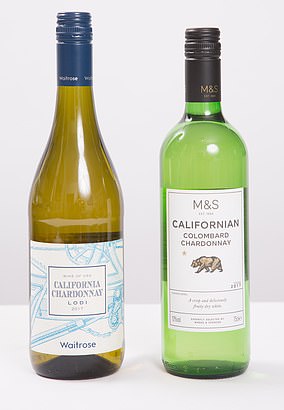 TASTE: I’m not a huge chardonnay fan but this wins me over. It tastes like tropical fruit — and is about as refined as you’ll get from a supermarket plonk.

TASTE: Despite the fancy bottle, this tastes more like Jacob’s Creek than a sophisticated chardonnay. It’s a little too dry and vanilla-like for me, and doesn’t pack much alcohol per volume.

Winner: Waitrose. It’s worth paying extra for a wine so surprisingly good. 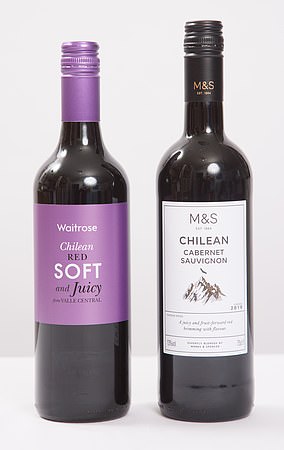 Winner: M&S. A classy supermarket wine for just over a fiver

TASTE: This is meant to be ‘mellow’ and ‘chocolatey’, but from the first sip mine tastes bland and lifeless. The bottle makes it look cheaper than it is, too.

TASTE: There’s far more body to this M&S red, which tastes great with a big bowl of pasta. It’s smooth, fruity, and dangerously easy to drink.

Winner: M&S. A classy supermarket wine for just over a fiver.