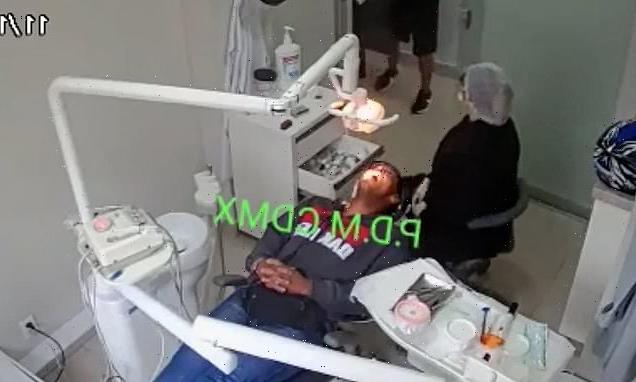 Say arrggghhh! Hero off-duty cop in Brazil wrestles armed thieves to the ground after they burst into the dental surgery while he was in the chair having a check up

This is the moment an heroic off-duty cop in Brazil wrestles a pair of armed thieves to the ground after they burst into a dental surgery while he was having a check up.

Surveillance footage shows two 19-year-old thugs bursting into the room while the officer is lying down on the chair.

The 46-year-old, a member of Brazil’s Military Police, is ordered to get on the ground while the dentist and nurses stand at the side the room against the wall.

But when one of the knifemen starts rifling through the cop’s pockets to take his gun, he fights back and hurls the thief onto the floor. 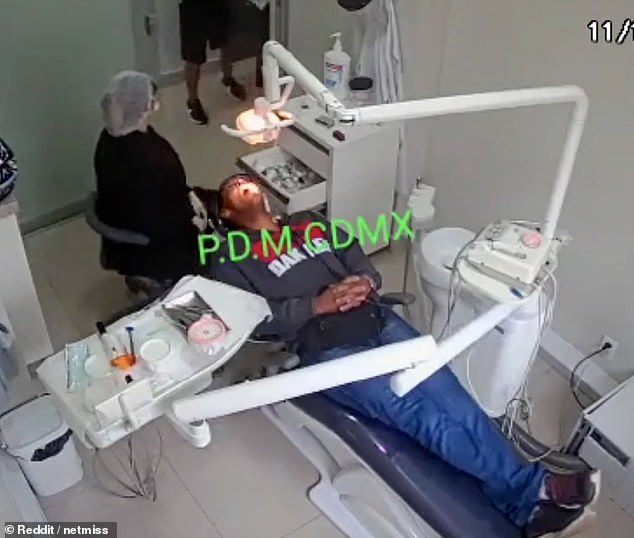 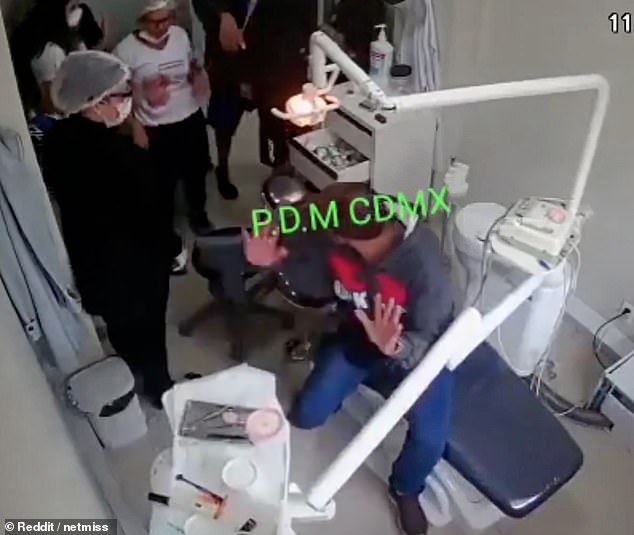 The 46-year-old, a member of Brazil’s Military Police, is ordered to get on the ground while the dentist and nurses stand at the side the room against the wall 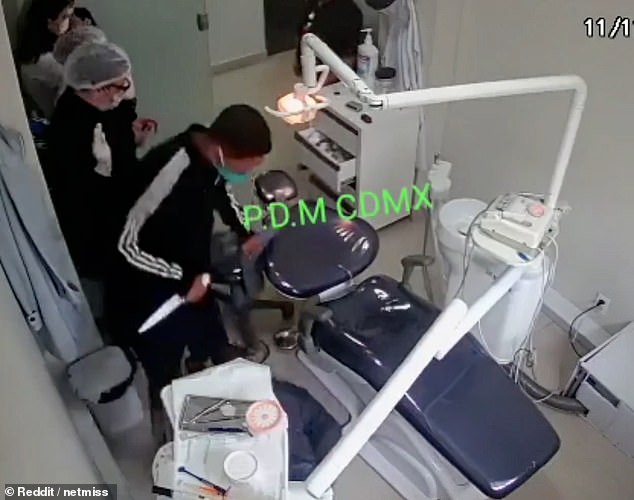 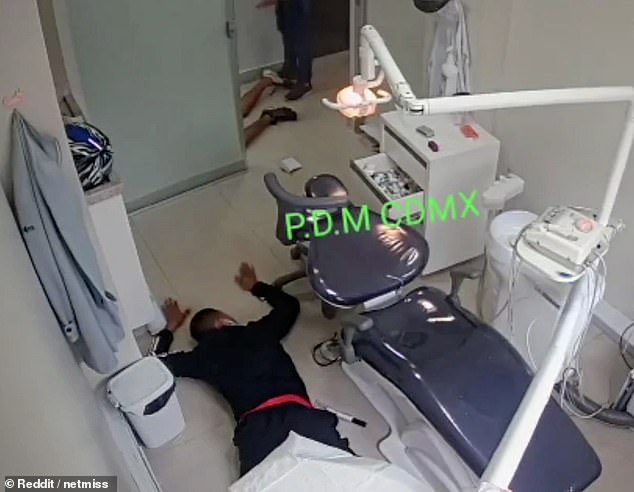 The second man then tries to take hold of the officer’s gun, but he too is wrestled onto the deck after being shot in the arm.

The unnamed cop, a second-lieutenant, was having the check up at a dental practice in the Ceilandia suburb of Brasilia on Thursday.

Footage showed the two thugs arriving at the clinic and taking seats in the waiting room before they took out their knives and forced an employee and a waiting patient into another room.

They then broke into the treatment room as the dentist was about to start working on the cop’s teeth.

After being ordered to lie on the ground, the thieves noticed he was fidgeting with his pocket – he was trying to go for his gun.

One of the men approaches with his knife raised, but when he leans over the cop, he immediately throws him over and manages to overpower him.

The struggle ends with the thief lying on the floor on his back with his hands in the air and the latter leaning over him with his handgun pointed at him. 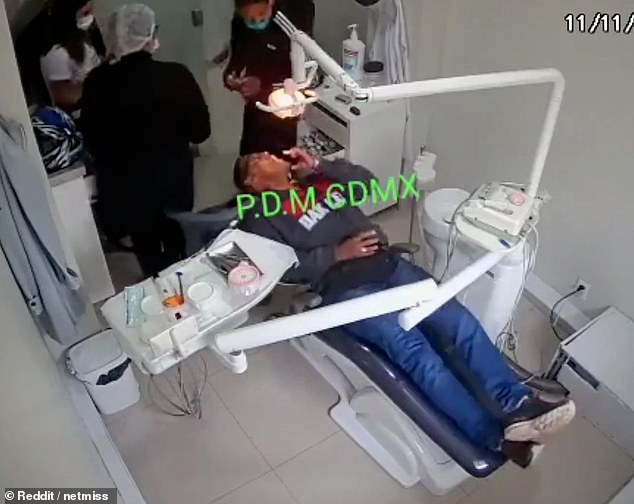 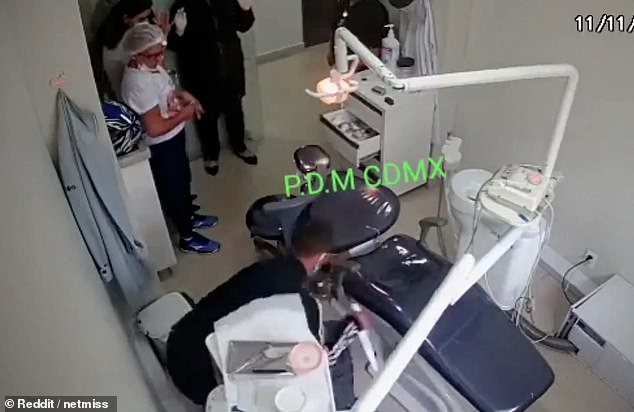 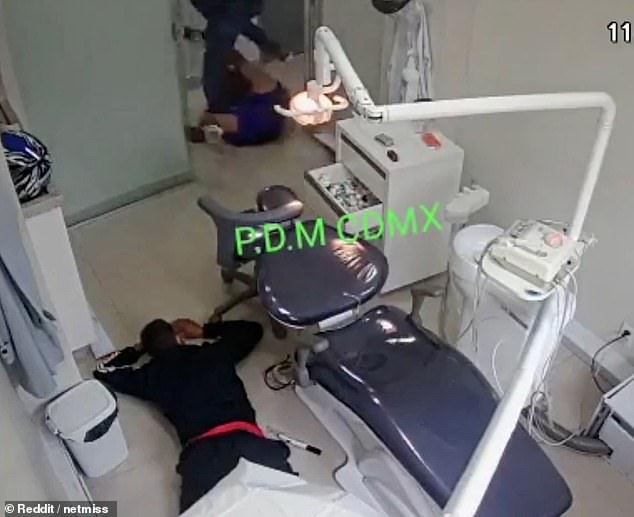 He orders the man to remain on the floor while he then goes after his accomplice, engaging in a struggle with him in the corridor before similarly forcing him to the ground.

Though it is not clear from the video footage, according to media outlets including the G1 broadcaster, the off-duty cop shot the second man in the arm while he was subduing him in the corridor.

G1 reported that he was taken to the Hospital Regional de Ceilandia while his accomplice was arrested at the scene.

The identities of the policeman and the alleged criminals and the name of the dental clinic were not reported. It was not reported if the men were charged.