BEIJING — The cracks are starting to form.

First, there were stories of athletes missing the Olympics entirely because of COVID tests failed before they ever got onto a plane. Next, there were the athletes who tested positive while in China, including Team USA flag bearer Elana Meyers Taylor. Now, the positive tests that could only have been contracted in-country are coming, like the one that’s flagged Team USA figure skater Vincent Zhou.

And now, in one of the most bizarre scenes yet at these COVID-affected games, two hockey teams took the ice Monday afternoon Beijing time, both fully masked.

Canada’s women walloped their Russian counterparts 6-1, but that wasn’t the story of this preliminary round game. The game was delayed more than an hour because Canada had not received Russia’s COVID report and did not want to take the ice until that was in hand, according to a Toronto Sun report. The Russian hockey team had a recent outbreak of COVID, and several players spent time in isolation before being cleared.

When the teams did take the ice, they did so wearing KN95 masks. The IOC apparently mandated the masks for “safety and security reasons.” By the third period, Russia had removed its masks, but Canada scored twice anyway. 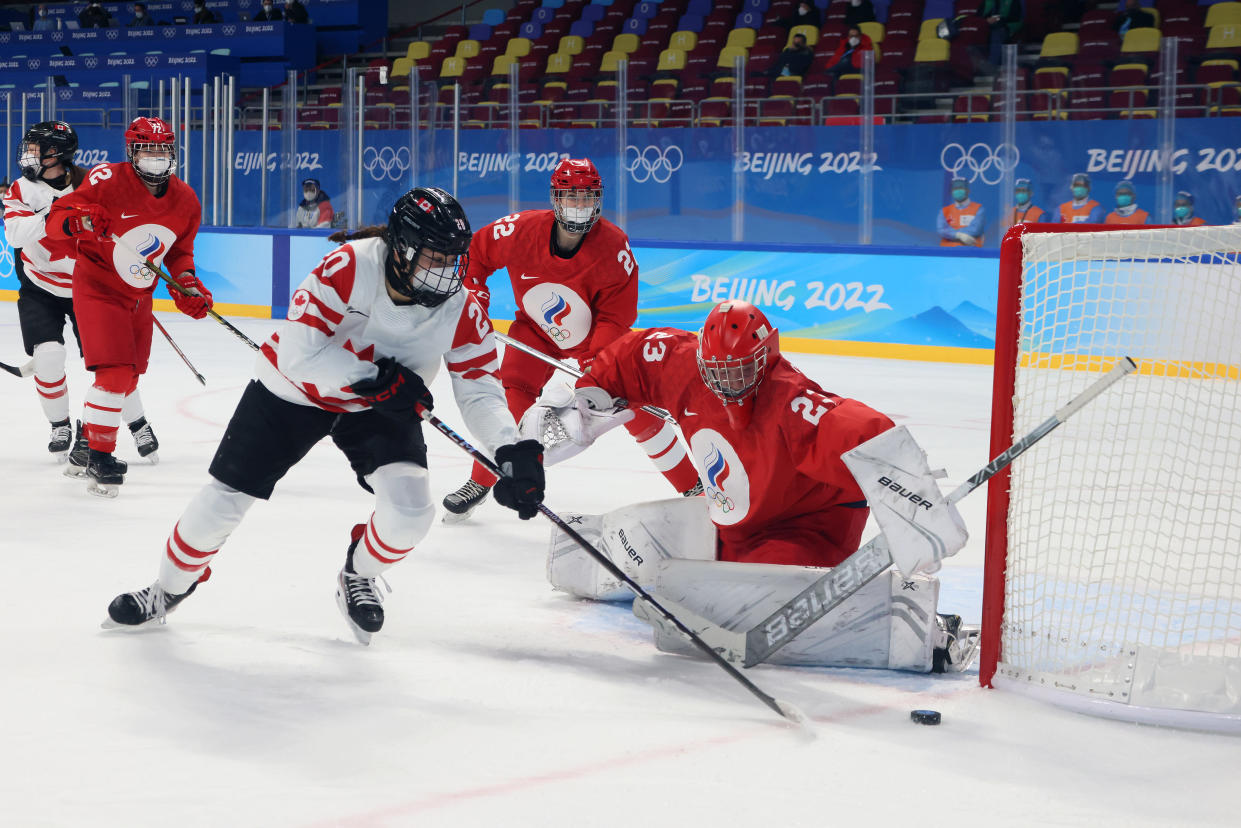 “The results came in and they were negative, and they said they were going to take their masks off,” Team Canada’s Natalie Spooner said. “We figured we had them on for two periods, so why not keep being extra safe for one period?”

“This is probably a cool story in the long run,” Spooner said. “We can say we were at the COVID Olympics and we even wore a mask in a game.”

The chaos surrounding the start of the game, as well as the eligibility of the players within it, runs throughout these entire Olympics. Every individual within Beijing’s closed loop is tested every day, every individual is one positive test from ending up in an isolation facility and obliterating their Olympic dreams … and there is no recourse, no oversight, no hope other than to pray to return a negative test as quickly as possible.

Even that isn’t a guarantee of freedom, as Taylor found; she tested positive again after testing negative and being almost out of isolation. (She’s since cleared protocols and has returned to the team.)

Every Olympics is rife with conspiracy theory; athletes and nations complaining that the judges and the hosts are biased against them is its own Olympic sport. The problem for these Games is that Beijing is operating under an entirely new system — the idea of stomping out COVID entirely, not containing it. The most important function of the Games is to keep the Games running, no matter what the cost to individuals, teams or nations.

COVID is the backstory of these entire Olympics. A few more incidents like Monday’s hockey game, however, and it will become the main story.