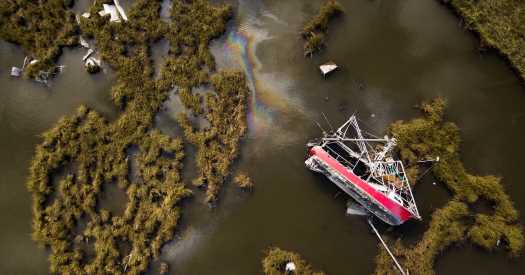 From her New Orleans restaurant, Melissa Martin sees the environmental damage that could end the region’s rich culture of food and fishing.

Melissa Martin cooks the seafood she grew up eating in Chauvin, La., at Mosquito Supper Club, her restaurant in New Orleans.Credit…Edmund D. Fountain for The New York Times

NEW ORLEANS — Days before Hurricane Ida hit last August, Maxine and Lanny Martin bought 150 pounds of shrimp in Chauvin, the coastal Louisiana town where they live. The shrimp came from fishers along Bayou Petit Caillou, which runs a few blocks from the house where the Martins raised six children, including Melissa Martin, a chef and cookbook author in New Orleans.

That seafood stockpile is one reason the Martins initially resisted their daughter’s pleas that they evacuate in advance of the storm, which devastated communities on the southeast Louisiana coast, including Chauvin.

The coexistence of abundance and vulnerability shapes lives and priorities in Chauvin and elsewhere on Louisiana’s Cajun coast, south of New Orleans. The region, central to the state’s commercial fishing industry, has lost land to the effects of climate change, which also makes storms more powerful, wet and frequent. The area provides the inspiration for Ms. Martin’s restaurant, Mosquito Supper Club, and her 2020 cookbook of the same name.

The damage Ida caused the coast provided the impetus for a fund-raising effort, started on a website Ms. Martin built in the passenger seat of her car, that has collected more than $765,000 to aid residents on the still storm-battered coast, much of it distributed in cash in partnership with the Helio Foundation, a nonprofit based in Houma. “At the beginning, no one could use credit cards for anything,” she said. “I was getting hundreds of D.M.s and emails from people asking for cash.” 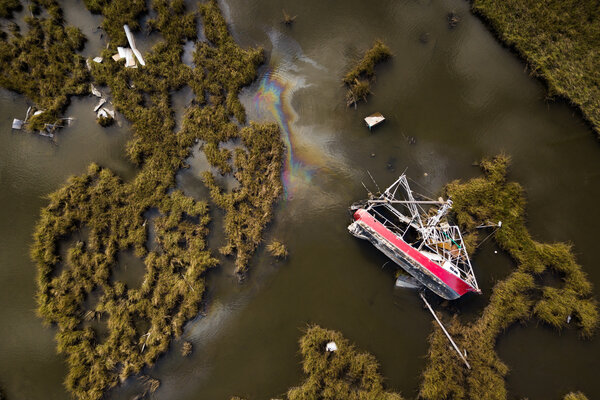 The campaign continues to invest in projects, including one to repair fishing boats, and amplify the message of her book: Life is perilous for residents of coastal towns like Chauvin, and for the rich food culture that flourishes there.

Land on Louisiana’s coast, which is at the heart of Louisiana’s energy business, is vanishing at an alarming rate. Oil exploration and fossil fuel pollution — a direct cause of the global warming that is driving the rise in sea levels — are also hastening the coastal erosion chipping away at wetlands that are crucial habitat for fish and other wildlife.

Ms. Martin, 44, is blunt about the toll this environmental crisis has already taken. The recipes she features in her book, subtitled “Cajun Recipes From a Disappearing Bayou,” and at her restaurant represent a culture whose days she believes are numbered. And the demise of an area that serves as a storm buffer for densely populated areas to the north, and that contains billions of dollars’ worth of energy infrastructure, will be felt everywhere.

“When this land disappears, it takes with it a portion of our nation’s safety and food supply, and a long legacy of culture and traditions,” she writes in her book. “Water is our lifeline and our dark shadow.”

When Ms. Martin and her father returned to Chauvin a few days after Ida made landfall, the shrimp they discovered still frozen in the family’s tightly sealed freezer was the only welcome sight for miles around.

“There were houses in the bayou,” she said. “Buildings were just gone.”

Ms. Martin has traveled to the coast dozens of times since Ida. On those trips, she saw the harm caused by one of the most powerful storms to hit Louisiana since Hurricane Katrina in 2005, compounded in communities that had yet to recover from 2020, when a record number of tropical storms and hurricanes hit the state.

“Right now, it doesn’t feel sustainable down there,” she said, sitting on Mosquito Supper Club’s screen porch in October, for the first of several interviews.

The restaurant, which began in 2014 as a series of Cajun-themed parties and pop-ups, has gradually gained renown for its seafood-focused cuisine and its homespun hospitality — gumbo is brought to the table in pots, along with potato salad, for guests to serve themselves. The food is distinct from the spicier, sausage-forward, often hybridized Cajun cooking common in New Orleans, whose roots mainly run to the inland prairies around Lafayette.

By the time of her cookbook’s release in the spring of 2020, not long after the arrival of the pandemic, Ms. Martin had built a loyal following. (The musician and actress Solange Knowles, an early fan, hired Ms. Martin to cook for her wedding.)

While local seafood is still foundational and widely available in south Louisiana’s restaurants, species that used to be ubiquitous now routinely go scarce at some point during the year, and not just after hurricanes. 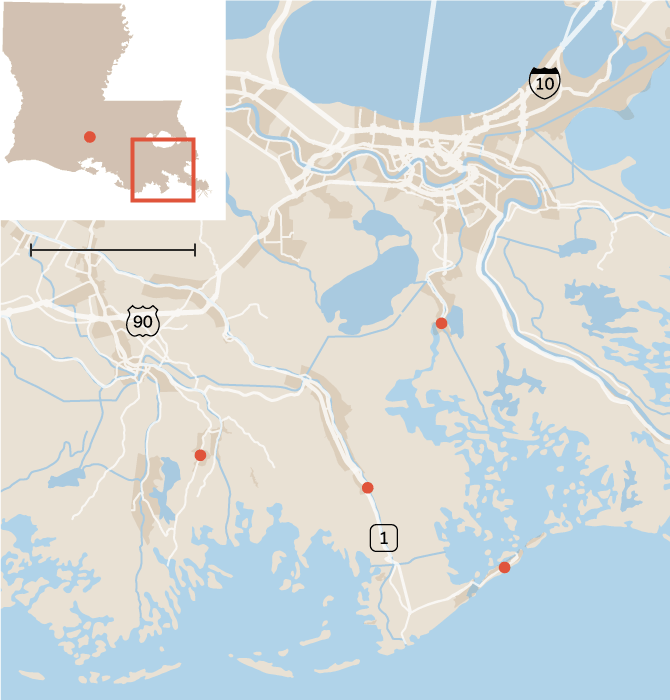 In 2019, heavy rain and snow runoff flowed down the Mississippi River from the Midwest, inundating the Louisiana coast with fresh water and killing millions of oysters. Land loss and flood control projects have further altered the salinity of many coastal lakes, bays and bayous, forcing fishers to travel farther for a catch whose dockside prices, depressed in part by competition from imports, may not cover expenses.

Those are among the challenges Ngoc Tran was navigating when Ida leveled the headquarters of St. Vincent Seafood Company, which she and her husband, Trung, run on Bayou Lafourche, in Golden Meadow, about 40 miles east of Chauvin. All five of the business’ shrimp boats were rendered inoperable by damage from the storm.

In November, the buzz of welders echoed around the rubble-strewn slab where Ms. Tran, 39, is trying to re-establish St. Vincent. Asked about the location of one of her boats, she pointed across the bayou to the marsh where it had been deposited on its side. Today, that boat is still there, and St. Vincent has yet to be rebuilt.

“The prices are so high, with everyone still working on repairing houses,” Ms. Tran said. “And we still don’t have electricity.”

Ms. Tran can’t imagine passing the business along to her children. “We don’t want our kids to go through this,” she said.

The reluctance of young people to enter an industry that is more arduous and less lucrative than it was in past generations has left Louisiana with a vexing conundrum: While the seafood remains plentiful — the state still routinely ranks second to Alaska in seafood production — the will and expertise to harvest it is dwindling.

The phenomenon, known locally as “the graying of the fleet,” is aggravated by storms like Ida and reflected in the steep decline in the volume of shrimp and oysters caught since 2019. A recently released study by the Louisiana Department of Wildlife and Fisheries and Louisiana State University estimates that the state’s $2.5 billion seafood industry suffered nearly $580 million in losses over the past two hurricane seasons.

More than half of the losses came from damage to infrastructure that may never be repaired. In November, Robert Collins, 62, the third-generation owner of Louisiana Dried Fish Company, stared into the sky from the floor of his waterside facility in Grand Isle, one of the most vulnerable communities on Louisiana’s coast. Ida had torn off nearly all of the roof.

“I’m not going to use my retirement savings to fix this,” he said. Last week, Mr. Collins said his business was still closed and that he was uncertain if it would ever reopen.

The future of the state’s seafood industry is invariably going to include newcomers with different expectations and fewer scars than those who were born to it. People like Scott Maurer.

Mr. Maurer, 45, fell for the oyster business after moving to Louisiana from Ohio to help rebuild homes after Katrina. Today, he farms premium oysters in cages in the shallow water just off Grand Isle. He remains committed to his Louisiana Oyster Company, even though he lost his entire crop to Ida.

“As long as I can get back to broke every once in a while, I think I’m winning,” he said. “I get to live on an island and work on the water.”

Ms. Martin, the New Orleans chef, is similarly committed to building a business on her own terms. She has always regarded Mosquito Supper Club as a work-in-progress whose goals depart from those of most traditional restaurants. It started when her daughter was in her early teens, and it expanded gradually, as her duties as a single mother diminished.

The restaurant moved to its current location, inside a Victorian cottage in the Uptown neighborhood, in 2016. Ms. Martin initially shared the space with other women entrepreneurs, including Christina Balzebre, who ran her Levee Baking Company as a pop-up in the space before opening in a permanent location in 2019.

Today the Supper Club occupies the entire cottage, which Ms. Martin filled with antiques, handmade furniture and paintings by her brother Leslie, who is also a jazz pianist. The restaurant is currently open four nights a week for one communal seating (and two private ones) of a preset, multicourse dinner.

Food is served family style in large platters, ceramic bowls or iron pots. A mid-January menu included the restaurant’s signature sweet potato biscuits, raw oysters topped with ponzu and finger lime and shrimp in lemon butter, all paired with natural wines. About 90 percent of the recipes featured at the restaurant and in her book come from Ms. Martin’s mother.

In a recent email, Ms. Martin described the Supper Club’s current incarnation as a chapter in “a continually changing experiment.” The goal is to create a sustainable business that allows her to, among other things, offer her employees respectable wages and health insurance. The restaurant, she wrote, “just happens to have a Cajun story driving it.” The menu now incorporates ideas from Serigne Mbaye, who started as chef de cuisine in October.

The raw oysters and shrimp on the January menu were both from Alabama. And the chef has yet to find a reliable crab purveyor to replace Higgins Seafood, which hasn’t reopened since Ida poured mud into its headquarters in Lafitte.

“Higgins would not only deliver a superior product. They’d deliver crab shells in plastic Piggly Wiggly bags,” she said. “That’s the kind of stuff I remember from growing up.”

Ms. Martin also continues to visit her hometown. She was there late last month, at her parents’ kitchen table, testing a king cake recipe with her mother for her next cookbook. She said she’ll return even after the book is done, “just to keep recording what’s happening.”