It’s a restaurant chain famous for its ‘pay as you feel’ policy and for helping the disadvantaged, and now Lentil As Anything is itself in dire need of help.

Management of the not-for-profit organisation say it will have to close within weeks and enter administration if it doesn’t raise $150,000 needed to stay afloat. 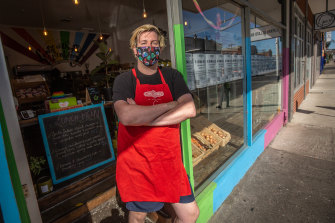 Luke Cornelissen, manger of the Thornbury Lentil As Anything restaurant is scared at the prospect of the chain folding. Credit:Scott McNaughton

Professor Paul Komesaroff, the Lentil As Anything board chair, said revenue was down 90 per cent compared to the same time last year.

Until now, during the pandemic, the chain – three restaurants in Melbourne and one in Sydney, staffed mostly by volunteers – had managed to run at "cost neutral".

"Now at the end of September with JobKeeper going down, rents and loan repayments resuming, at the same time, we’re on the edge of a precipice, basically," Professor Komesaroff said.

"These are costs we didn’t have to pay at the peak of the disaster but with all of these things happening simultaneously it’s threatening to push us over the edge." 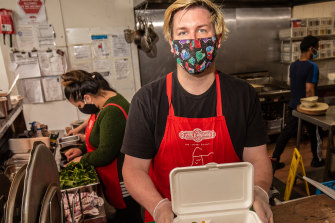 Luke Cornelissen with staff preparing take away and delivery meals at Thornbury Lentil As Anything. Credit:Scott McNaughton

Lentil As Anything’s outlets in Melbourne’s St Kilda and Thornbury are open for take away and delivery only, including free food for the disadvantaged.

The Abbotsford Convent premises has been closed for months with the Convent precinct’s closure.

The restaurant in Sydney’s Newtown has re-opened for dine-in service, and was "going OK but it can’t support the entire organisation on its own", Professor Komesaroff said.

He said the restaurants provided a million meals a year, aided by food donations, and the average price a customer paid was $4.50.

It supported "very poor, marginalised, vulnerable people in the community".

Professor Komesaroff said asking for $150,000 in donations might sound modest but the organisation runs on a low budget — about $4.5 million per year — and the amount would tide it over until all outlets can re-open for dining.

He said it was "pretty amazing" that more than $50,000 had been raised on the GoFundMe page Save Lentil As Anything by Sunday evening.

Lentil as Anything’s Thornbury manager Luke Cornelissen, 32, said the prospect of the chain folding scares him.

Many of his customers are impoverished homeless people or international students and get free or cheap meals.

Mr Cornelissen has worked for free, five or six days a week, since March and survives on JobSeeker payments.

"This is a worthwhile cause and I can see how much of the community it supports, the difference it makes in people’s lives, so I’m more than happy to throw all my support behind it," he said.

"The idea of this closing — I’ll fight until the very last opportunity to keep this place going. We’ll do whatever we have to do."