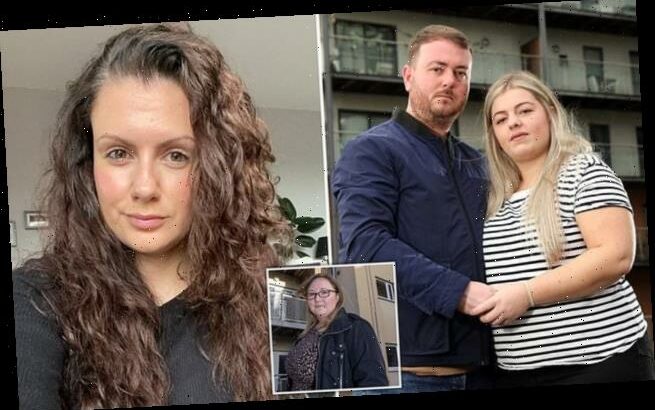 Britain is facing its biggest housing crisis in a generation as failures to fix unsafe homes are putting one in seven property deals at risk of collapse, the Mail can reveal.

More than a million homeowners have been left unable to sell or remortgage their properties in the wake of the Grenfell disaster.

Hundreds of thousands of leaseholders in unsafe homes face average bills of £40,000 – and some of up to £115,000 – to replace dangerous cladding, similar to that found on Grenfell Tower in west London, where an inferno killed 72 people in June 2017.

Tens of thousands of sales are already thought to have fallen through, and now exclusive analysis by consultancy Capital Economics shows that up to 14 per cent of all transactions could be sunk by the scandal. Estate agents in badly hit parts of the UK say that up to 80 per cent of their stock is unsellable. 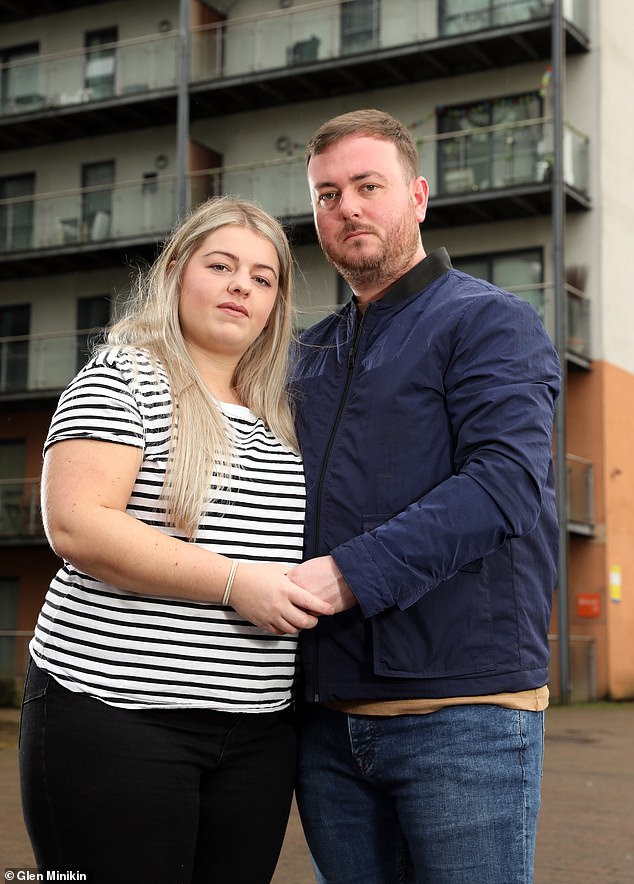 Alexandra Parry and her partner Aled Evans (pictured together) are being forced to pay more than £330 a month in extra bills for their unsafe flat – and face forking out for a share of the £6.2million the block will cost to fix 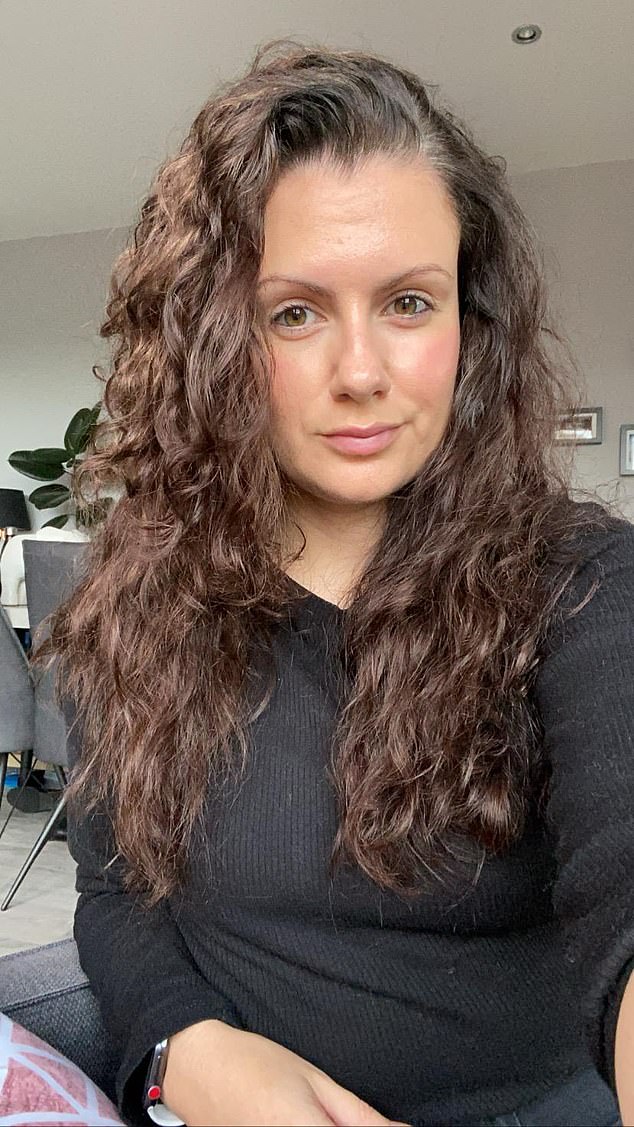 National Housing Federation chief executive Kate Henderson said: ‘This has inevitable consequences for the housing market, creating a bottleneck of leaseholders unable to move out and buy somewhere else, and people in need of affordable homes unable to get on to the housing ladder.’

Tory MP Royston Smith, who is leading a backbench campaign on the issue, said the crisis ran roughshod over Conservative ideals of ‘the home-owning democracy’.

Mr Smith said: ‘We get people to buy into that dream, sometimes using subsidies or tax breaks, and then we retrospectively change the regulations, abandoning tens of thousands of people in unsafe and unsellable properties. It is a disaster for leaseholders.’

Experts believe it could take another ten years to fix all unsafe homes at the current rate, putting up to four million lives on hold.

Alexandra Parry and her partner Aled Evans are being forced to pay more than £330 a month in extra bills for their unsafe flat – and face forking out for a share of the £6.2million the block will cost to fix.

Since finding out it had failed post- Grenfell fire checks, they are having to fork out each month for safety warden patrols, alarms and enhanced insurance.

Miss Parry, 25, and Mr Evans, 28, who live on the edge of Manchester city centre, want to buy a house and start a family, but she said: ‘We are stuck in this unsafe apartment as we cannot sell.’

Remediation work to external walls made with flammable insulation will cost £6.2million split between all 180 flats.

The flat had been valued at £230,000, but Miss Parry said: ‘Now it’s worth nothing.’ Down in Reigate, Surrey, the sale of Sarah Fletcher’s £285,000, two-bedroom flat collapsed when she was told the block needed a survey that could take 42 months.

The block doesn’t qualify for the Government’s Building Safety Fund, so she fears she will have to cover all the costs.

Mrs Fletcher said: ‘I didn’t build the building, I didn’t pass the regulations on the cladding but now I have to pay for it.’

Nikki Urquhart is facing a bill of tens of thousands of pounds for work on part of her block of flats she doesn’t own or use.

The 30-year-old said she was reassured when the management company told her there was no Grenfell Tower-type cladding. But her hopes of selling her £190,000, one-bedroom flat were dashed because of wooden walkways in the brick-built block, in Didsbury, south Manchester.

She does not know when remedial work will start – and, worse, who will pay.

The Government has set aside £1.6 billion to fund repairs, but MPs estimate the total cost will be closer to £15 billion. Work cannot begin until comprehensive funding is released. The leaseholders are already paying at least £2.2 billion a year between them for stop-gap safety measures and insurance hikes while they wait for work to begin.

The Mail yesterday launched a campaign to end the scandal. We are calling on ministers to fix Britain’s dangerous buildings within 18 months and spare leaseholders the crippling financial burdens.

Labour, the Lib Dems and more than a dozen Tory MPs yesterday added their support to our campaign. TV property expert Phil Spencer is also backing it. He said: ‘The Government has to do something. It is blatantly unfair.’

Government guidance means homeowners must get a form proving their building is free from dangerous cladding. If it does pose a risk, an explanation of required repair work is needed. It used to apply only to blocks taller than 60ft (18m). But in January 2020, Government guidance was extended to buildings of all heights with any cladding, not just the type that caused the Grenfell fire in 2017. And blocks with no cladding are also caught by the rules.

It means the number of flats requiring an external wall survey (EWS1) has grown from 307,000 to 1.27 million – 5 per cent of England’s homes and 40 per cent of all flats. There were 137,000 flat sales in England last year, meaning 55,000 deals could be directly affected, according to Capital Economics.

But the firm said the real number could be double that because the flat owners’ purchase of their new home would probably also collapse. It means 14 per cent of an estimated 787,000 annual transactions are at risk. Capital Economics believes house prices will fall by 5 per cent in 2021 due to the pandemic. But it said flat owners being unable to sell could reduce demand for ‘second step’ properties, leading to price falls on larger homes of up to 8 per cent.

Mr Spencer said the market could be stopped in its tracks.

Douglas Haig, director of James Douglas estate agents, said about 80 per cent of his stock in the Cardiff Bay area was unsellable. He added: ‘It’s completely log-jammed the market because lenders in general are turning round and saying all buildings need EWS1 forms.’

A Government spokesman said: ‘We don’t recognise this analysis. Through no fault of their own, some flat-owners have been unable to sell or re-mortgage their homes – and this cannot be allowed to continue. That’s why we have secured an agreement that owners of flats in buildings without cladding do not need an EWS1 form to sell or re-mortgage their property. If a form is genuinely needed, we are providing £700,000 to speed up the process.’

Towering injustice: Pressure mounts on PM as big names back our campaign

Politicians, industry experts and desperate leaseholders last night united behind the Mail’s campaign to fix Britain’s dangerous buildings and save the property market.

They implored ministers to act swiftly to support four million Britons who are stuck in fire traps and can’t sell their homes. Many face bankruptcy as they are lumped with average bills of £40,000 to pay for repairs.

The Mail is urging ministers to fix the crisis by June 2022 and spare leaseholders the crippling financial burdens.

Our campaign is now being backed by MPs of all parties, including more than a dozen Tory backbenchers. Their support will pile pressure on housing secretary Robert Jenrick and housing minister Chris Pincher to step in to end the scandal. 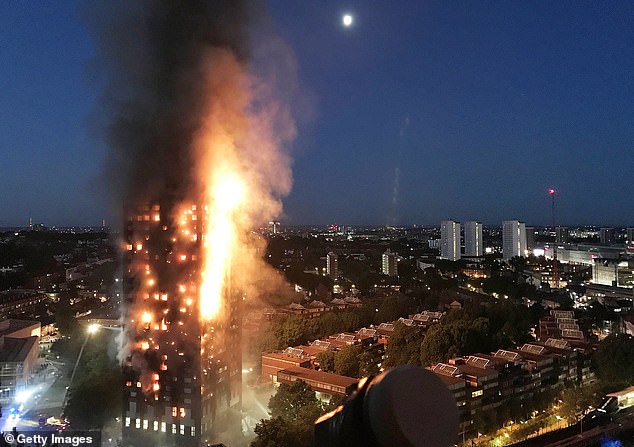 ‘Instead, nearly three and a half years on, thousands of Londoners continue to live in unsafe accommodation, facing stress, uncertainty and fear as building owners drag their feet and the Government fails to take responsibility. I fully support the Mail’s campaign to stop flat-owners paying the price for the Government’s inaction.’

Former Cabinet minister Andrew Mitchell said it was ‘unacceptable’ that leaseholders were being made to foot the bill. Lib Dem leader Sir Ed Davey congratulated the Mail for ‘its important work to highlight the terrible injustice of people stuck in fire-trap homes’.

Caroline Nokes, one of 16 Tory MPs who have signed an amendment to the Government’s Fire Safety Bill in a bid to protect leaseholders from paying for repairs, said: ‘The Daily Mail is doing a phenomenal job highlighting the issue and making sure it stays at the top of the housing minister’s agenda. 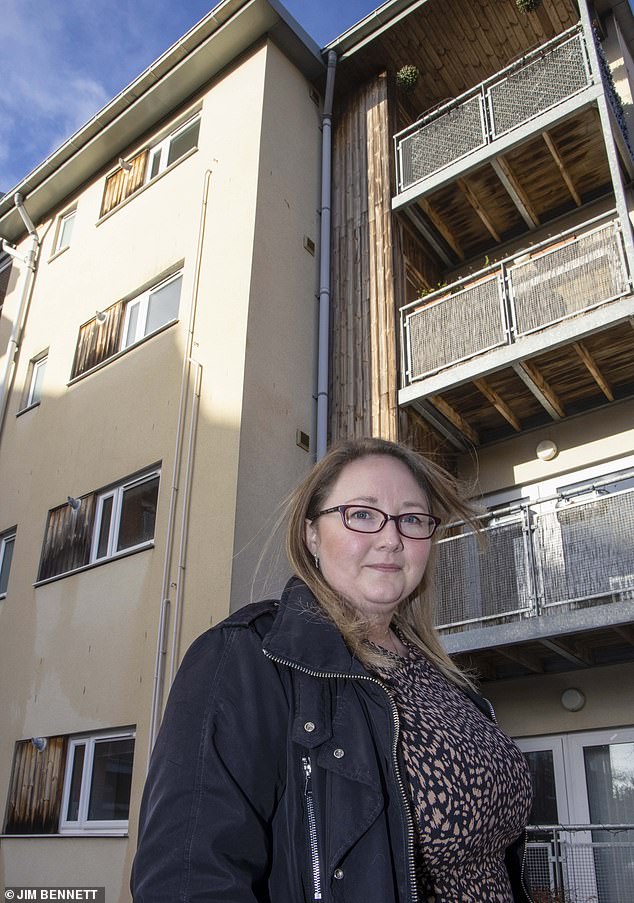 Down in Reigate, Surrey, the sale of Sarah Fletcher’s £285,000, two-bedroom flat collapsed when she was told the block needed a survey that could take 42 months

‘For far too many, their first step on to the property ladder has been a disaster, and they are left with a worthless flat, unable to move and too scared to sleep there at night.’

Tory MP John Baron, another signatory, said: ‘It is unacceptable that leaseholders are being required to cover the costs of mistakes that they have not made. Many are unable to afford the high costs of remedial works, and are living in flats which are unmortgageable, unsaleable and potentially at risk of fire.

‘Conservatives believe in a property-owning democracy, and the Government ought to step in to resolve this situation. I welcome the Daily Mail’s campaign and meanwhile look forward to the return of the Fire Safety Bill to the Commons in due course.’

The growing number of Tory backbenchers supporting the cause means Boris Johnson faces a significant rebellion when legislation returns to Parliament, possibly by the end of the month. The Prime Minister’s hand may be forced if opposition MPs also back the amendment.

Labour’s housing spokesman Thangam Debbonaire said: ‘This crisis has already had knock-on effects across the entire housing market. Without urgent action, even more families will be stuck in limbo.’

A Government source said: ‘We recognise the importance of the Mail’s campaign, and it is a top priority for this Government to remove unsafe materials at pace – backed by £1.6billion funding.’

He added that a range of funding options were being considered and that work was complete or under way on ‘the vast majority’ of high-rise blocks with Grenfell-style cladding.

A minister whose department is supposed to be tackling the cladding scandal has advised voters to glug £174-a-bottle champagne while awaiting the rollout of the Covid vaccine.

In an article for The Critic magazine, Mr Pincher wrote: ‘In the land of shimmering champers, at least in my opinion, Krug is king.’

He recommended the 166th edition of the Grand Cru Cuvée – a champagne blended annually using more than 120 wines from ten different vintages. 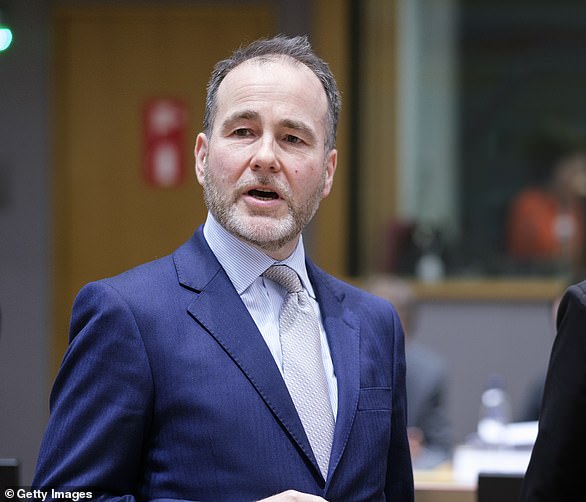 Writing in this month’s edition, Mr Pincher said: ‘Since 1843, six generations of the family have devoted themselves to Joseph Krug’s mission to make the essence of champagne ‘pleasure itself’. With the Grand Cru Cuvée (166th) it is difficult to disagree. This wine fair dances in its glass; it is nearly as much fun to watch as it is to drink. 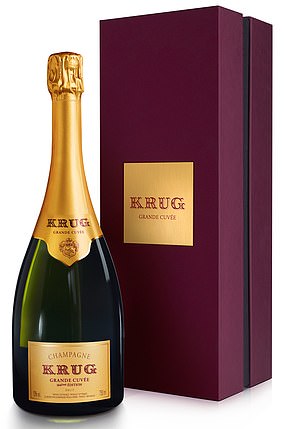 In an article for The Critic magazine, Mr Pincher wrote: ‘In the land of shimmering champers, at least in my opinion, Krug is king’

‘It is ideal for lifting the spirit and lighting up a darkening winter afternoon.

‘So, if you have the chance, or the wherewithal to buy a bottle, these bubbles will brighten your family bubble and provide an alternative vaccine until the real thing provides more permanent inoculation against the memory of last year.’

Labour housing spokesman Mike Amesbury said: ‘Every dot and comma of this column lays bare how totally out of touch this Government is. While people across the country worry about rising Covid infections and the recession caused by the Government’s dither and delay, one minister was writing articles recommending they buy £170 bottles of champagne to ‘lift spirits’.

‘Chris Pincher should be fixing the massive problems facing leaseholders, rising homelessness and those in desperate need of quality housing, not trying to flog luxury wines.’

Mr Pincher has a regular wine column in The Critic.

According to the Commons register of interests, he earned £1,200 for writing six articles for the magazine in the past year. He donated £400 of this to charity.