Like driving a cross between a hairdryer and a shopping trolley! One of the most iconic vehicles ever, the bubble car is back. Electric, nippy and a joy to park… but it’s not all good news, writes ROBERT HARDMAN

Britain was celebrating the last Coronation when one of these things first tumbled off the production line — a revolutionary four-wheeled pod designed as a low-cost, eye-catching urban runaround.

Even Cary Grant took to touring Hollywood in what the manufacturers called an Isetta and what the world came to know as a ‘bubble car’.

Seven decades on, the concept is back. This time, however, the bubble is bigger, tougher, faster, more comfortable and eco-friendly since it is entirely electric.

It is also between a third and half the price of the next tier of electric cars. And even though the Microlino is essentially a cross between a hairdryer and a shopping trolley, it has both character and a certain retro-chic style. It certainly gets double takes and friendly remarks as I whizz round town in one. 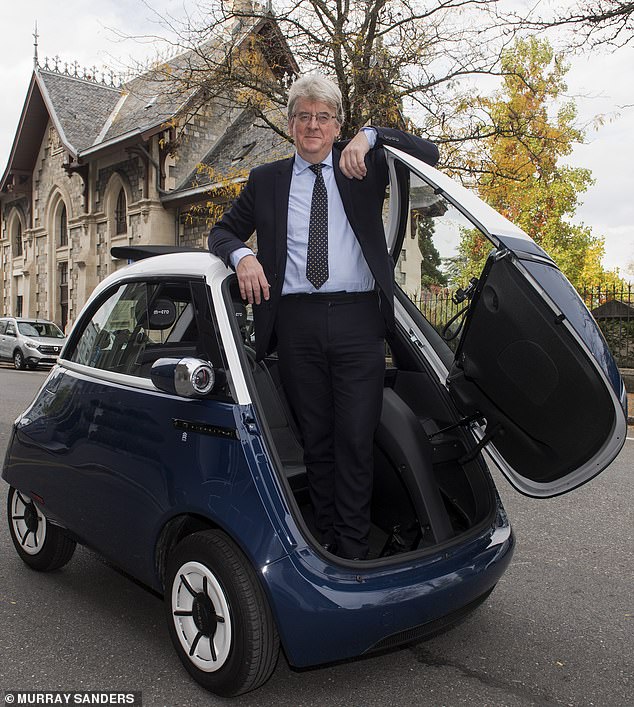 And unlike the normal ‘car of the future’, this is not a weird-looking, headline-grabbing prototype wheeled out at an international motor show amid much hype, only to disappear back to the drawing board because it doesn’t work or the sums don’t stack up.

The Microlino has been designed and fully financed by the same Swiss family who made a fortune redesigning the humble scooter. Dad, Wim Ouboter, has been described as the ‘Swiss Elon Musk’ after the oddball gazillionaire, although the comparison goes only so far given Ouboter is a family man who lives in suburban Zurich with no desire to buy Twitter, rule the world or conquer space. He’s just an ex-banker who makes scooters and now wants to make bubble cars.

The family’s ambitious new departure from two wheels to four is already in production at a newly built Italian car plant. The Microlino has an order list stretching more than a year ahead and a price tag of £13,000 — rising to the £19,000 for the souped-up, top-end model which I am sitting in. 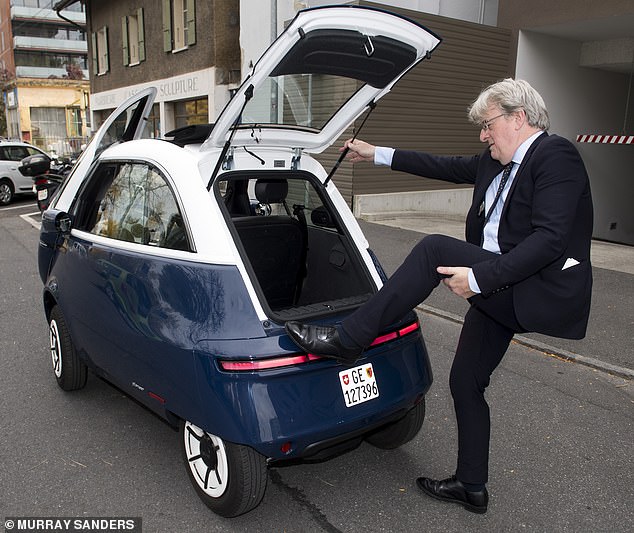 Robert Hardman: ‘Cary Grant took to touring Hollywood in what the manufacturers called an Isetta and what the world came to know as a ‘bubble car’. Seven decades on, the concept is back. This time, however, the bubble is bigger, tougher, faster, more comfortable and eco-friendly since it is entirely electric’

I have had to come to Switzerland to drive it because it will not be on British roads until the end of next year, although more than 2,000 Brits have already ordered one. As have thousands of other would-be customers all over Europe.

I climb in through a flip-top front door and then slide along a two-seat banquette to get behind the wheel. I have to reach up to pull a strap which brings the lid down, though not too hard as it emits a reassuring ‘thunk’ on reaching the bottom — what is called a ‘soft close’ — and snaps shut by itself.

There is a regular car key which slots into a regular ignition, except there is no noise because there is nothing to ignite. A driver’s screen merely lights up with the word: ‘Hey!’

Turn the dial from ‘N’ for neutral to ‘D’ for drive and step on the dodgem-style accelerator and there is finally a whirring noise. This fast amplifies to a pronounced whine from the automatic gearbox as the car reaches cruising speed.

When I press the button marked ‘Sport’, the whining becomes intense and the Microlino suddenly accelerates with serious oomph.

Speed is not a problem. In fact, I never got to hit top speed on these urban roads anyway. My concern is with the braking. This is rather squelchy and requires several pushes on the pedal when I try a couple of emergency stops.

Overall, the bodywork feels solid. It’s certainly not tinny. Nor is it cramped inside, even with the photographer sitting alongside me with his kit.

The double seat slides backwards and forwards to suit and there is legroom for all but the very gangliest. The boot easily has room for a couple of suitcases or a weekend shop (though not quite for a full-grown man, as I find out when I give it a try). 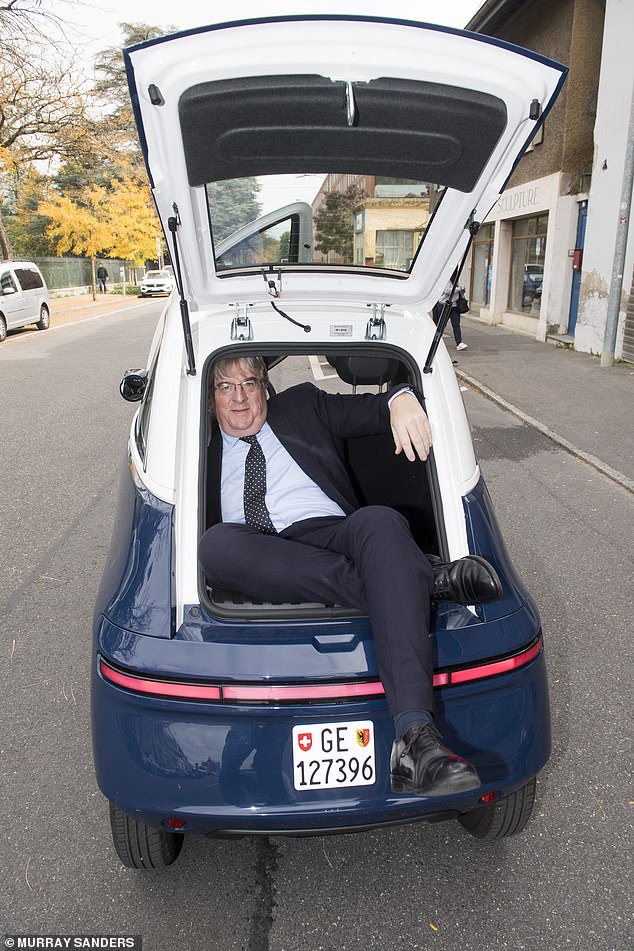 ROBERT HARDMAN: ‘The boot easily has room for a couple of suitcases or a weekend shop (though not quite for a full-grown man, as I find out when I give it a try)’

Headroom may be a problem for the very tall, but the car comes with a sunroof. This is manual, like the sliding windows, for the simple reason that it keeps the number of components — and therefore both the weight and the risk of technical problems — to a minimum.

For the same reason, there is no air conditioning. Just conventional heating and ventilation operated via a touch- screen panel.

The most notable omission is that of any sound system. There is no radio, hifi or satnav. Given that most people now use their phone to play music and give them directions, this is not really a problem; you just stick your phone in a docking cradle and link it to a Bluetooth speaker.

Where this thing impresses most, though, is when it comes to parking. Its wheelbase is sufficiently short to allow you to park at right angles to a standard parking place — what the trade calls ‘cross-parking’ — and still be legal.

Because entry is through the front, not the side, you can squeeze into really tight spots and still open the door. Indeed, three Microlinos can slot into a standard space for a single saloon. What makes it all the more interesting is that here we have a mass-production car from a family business which has never made a car before. 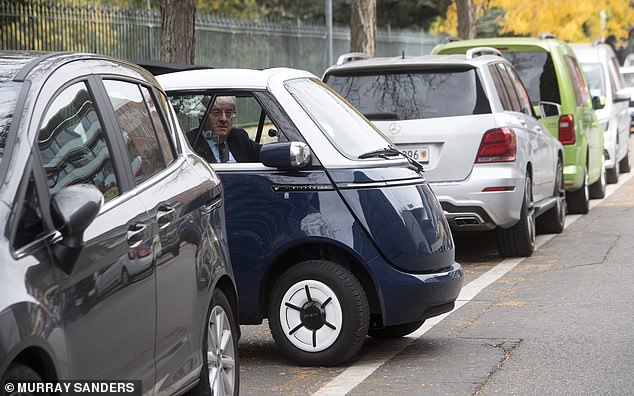 ROBERT HARDMAN: ‘Where this thing impresses most, though, is when it comes to parking. Its wheelbase is sufficiently short to allow you to park at right angles to a standard parking place — what the trade calls ‘cross-parking’ — and still be legal’

The Ouboters have made their name — and about £600 million —from producing the Micro range of scooters. These are aimed at everyone from three-year-olds to commuters. I myself fall over a pile of them every morning just walking down the stairs at home.

Now Wim, his wife, Janine and two sons, Oliver, 28, and Merlin, 26, have applied the same principles again: take a simple, proven design and then remodel it to suit contemporary needs and tastes. ‘We do like finding something in a small category that is not cool, that does not have a lot of big competition and then re-engineering it and bringing in a bit of lifestyle,’ says Merlin, from the family HQ just outside Zurich, where he runs the sales and marketing side of the new business.

He explains that the family owns an Isetta, just like the one which Cary Grant made famous back in the 1950s and which sold more than 160,000 models before BMW ceased production in the 1960s.

The idea was to make ‘a small electric vehicle for the everyday commute’. Given that many others, from madcap inventors to giant motor manufacturers, have tried to corner this market without success, why will the Microlino make a difference?

‘I think other newcomers have found just how hard it is to get this off the ground. Building a prototype is only 5 per cent of making a car,’ says Merlin. ‘And because we are a family, we can make decisions much faster than a big company.’

So, they started work on the original Microlino back in 2016, developed a car using a lot of Chinese components and then dropped the idea after problems with their production partner.

While others might have called it quits at this point, the Ouboters simply set about redesigning a better car just as Covid showed up the perils of global supply lines. The result is a faster, stronger, more efficient model with 90 per cent of components from Europe.

Except it is not, officially, a ‘car’. Merlin explains that, according to European technical rules, it has a motorcycle designation, even though you need a vehicle licence to drive it.

This, it transpires, is very important when it comes to finding the right slot in the market.

Citroen, for example, has a tiny electric runaround called the Ami which is classified as ‘L6E’. This means it is rated as a quadricycle, can be driven by a 16-year-old without a driving licence but can’t go faster than 25mph. It’s cheap but, in essence, is a moped with a roof.

Further up the electrical tree is something like the Mercedes-owned Smart car. However, because that is classified as a motor car (known as ‘M1’), it has to meet very clear safety specifications for cars. That means much higher weight and cost.

Sitting in between is the Microlino, which has a ‘L7E’ rating — the highest category for a ‘motor tricyle or quadricycle’. This means it can weigh much more than the Ami (almost half a ton without its battery) and carry more power, with a top speed of 56mph.

It is a car in all but name, but without the full specifications. ‘If you are classed as a regular car, it’s really difficult to make money at that price range,’ says Merlin.

Renault has gone for the same bracket with its Twizy, but this has struggled with its mobility scooter looks and the fact the passenger has to squash in behind the driver.

Microlino’s strategy has been to create a retro feel while stripping out non-essential fripperies to maximise efficiency.

The family has hired ex-BMW director, Peter Muller, who previously helped design the Porsche Boxster, to head up all things technical.

‘We use 50 per cent less electricity per 100km than an average electric car,’ says Merlin, adding that a Microlino only requires about 50 per cent of the components, too.

For now, the Microlino strategy, as the name suggests, is to start small. The first cars only hit the road in Switzerland last month and, at present, the family’s Turin factory employs just 40 people producing 25 cars a week.

Customers can only order online but there needs to be a dealership network in place in each country first in order to handle repairs. Germany, Italy and Belgium are now established as the next countries to receive the thing. Talks are in hand with potential British partners and Merlin is adamant that the first Microlinos will be on UK roads by the end of next year.

There are no right-hand drive models in production yet, but he says that is not mandatory and many Brits like the retro continental look anyway.

Besides, the car is improving all the time. Depending on your choice of battery, current models have a range of up to 109 miles. However, a new battery is on its way and, in a matter of weeks, range will be extended to 144 miles. Coming soon, as well, is a less whiny and irritating gearbox.

Meanwhile, the family continues to produce their scooters — Mum, Janine, heads up that side of the business — while Dad remains in charge of overall strategy and the two boys focus on the car.

They are a close-knit quartet. The brothers have left home now but both return there for dinner with their parents every Sunday night.

With no shareholders to answer to, they are under no obligation to discuss the cost of the new venture, although Merlin confirms that it is easily in the tens of millions.

It’s too soon to say. However, Merlin reveals a striking new statistic.

Driving a Microlino, it transpires, is more eco-friendly than public transport, following studies with Swiss commuter trains. ‘We have used railway data that shows the train consumes 7.8 kwh per person per 100km. With us, it’s nearer 7.5 kwh.’

Whenever this thing does finally hit our shores, we are clearly going to have to avoid Microlino owners at dinner parties or the school gates like the plague.

The smugness is going to be unbearable.