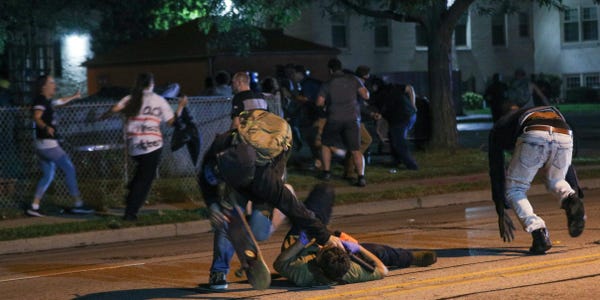 On Tuesday, 17-year-old Kyle Rittenhouse opened fire on protesters in Kenosha, Wisconsin. He's been charged with shooting three people and killing two of them.

Authorities have not released the victims' names, but witnesses said that the two killed were Anthony Huber and Joseph "Jojo" Rosenbaum. 26-year-old Gaige Grosskreutz from West Allis was also shot but is expected to survive, the Guardian reported.

Rosenbaum, a 36-year-old resident of Kenosha, is a Texas native and is survived by his two-year-old daughter and fiancée, the Milwaukee Journal Sentinel reported.

"May you forever be with the angels and rest easy bro. I love you!" Rosenbaum's sister wrote in a Facebook post.

Huber, a 26-year-old resident of Silver Lake, Wisconsin leaves behind his girlfriend Hannah Gittings and stepdaughter. The two were walking down the street when the shooting took place.

"We're walking down Sheridan, 'bang, bang,' hear gunshots go off," she told WISN-TV. "He ran up on somebody with an assault rifle, like he was just gonna tackle dude to the ground."

Gittings said that Huber then tried to stop the shooter with his skateboard.

"He came at the dude, dude rolled on the ground, and had a perfect vantage point to just put one in him, and he did," Gittings said.

"If those three hadn't run up on that dude, he would have opened fire into the crowd. Who knows what he would have done. He already killed someone," she said.

The shooting took place during the city-wide anti-police-brutality protests in Kenosha that began after a video circulated on social media that showed police officers shooting Jacob Blake, a Black man, in the back at least seven times. Blake has been hospitalized and is paralyzed by the waist-down, his father has said.

Rittenhouse was arrested by police Wednesday morning and was charged with first-degree intentional homicide and other felonies on Thursday.

Huber was commemorated by fellow skateboarders after his death

Huber was an avid skateboarder and well known within his community.

"He was all about street skating. That's literally all he would do was skateboard and make people smile. He was a figure around here. He was a part of a lot of people's lives around here," Justin Tawwater, a friend of Huber, told the Chicago Sun-Times.

"He was always talking about having to be home and take care of his kid," Tawwater said. "I'm going to miss him"

On Wednesday, skateboarders gathered in Basik, a skate park in Kenosha to pay their respects.

"Go out there and skate as hard as you can," Gittings shared in a Facebook post on Wednesday.

People skated through the park and wrote notes in chalk in memory of Huber. "Anthony Huber is a hero," one note read.

Two separate GoFundMe pages were set up following the shooting. One for his girlfriend, which has raised over $100,000, and another for his parents.

The GoFundMe page for Higgins was started by Danielle Rasmussen, a 42-year-old woman who said that she went to cosmetology school with Higgins' close friend.

"I saw the need and reached out and asked if I could start a GoFundMe," Rasmussen told Insider, adding that she wanted to use her social media platform to raise money, "I thought I would like to use it to help her."

A GoFundMe page was also created for Rosenbaum to assist his fiancée in funeral costs.