Victoria’s crime rate dropped to its lowest level since 2015 over the past year on the back of coronavirus restrictions that constrained the number of “opportunistic” crimes such as theft but boosted family violence incidents.

More than 32,000 Victorians were fined for public health and safety offences – primarily breaking the Chief Health Officer’s coronavirus directions – in the 12 months to June 31, with many fines still unpaid.

The local government area of Melbourne recorded the highest proportion of offences at 21,366 per 100,000 residents – up 9.7 per cent on the year before. This includes breaches of the CHO’s directions.

The Latrobe local government area in Gippsland was second on 16,713 offences per 100,000 people, followed by Ararat where the number of recorded offences boomed a whopping 41.2 per cent compared to the year before to 16,428 per 100,000 residents.

About 16,000 breaches of family violence orders took place across the state, an increase of 22.1 per cent on the year before – a trend already labelled a “state emergency” by experts in March.

Statewide, however, the number of crimes recorded was down 6.9 per cent on the year before to just under 379,000. The last time Victoria recorded a lower number was in 2015 when 352,000 criminal incidents occurred. 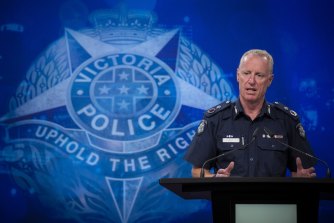 Robbery, property damage and theft were among the offences that dropped off most significantly.

The figures were unveiled on Thursday in the state’s annual crime data and Crime Statistics Agency chief statistician Fiona Dowlsey said the overall decrease had coincided with coronavirus-related restrictions on movement.

“The volume decrease during this time been observed largely in the acquisitive and more opportunistic crime types such as thefts,” she said.

“Conversely there have been increases in breaches of orders including family violence orders and Chief Health Officer directions. As a result, we continue to record higher numbers of alleged offenders in the last 12 months.”