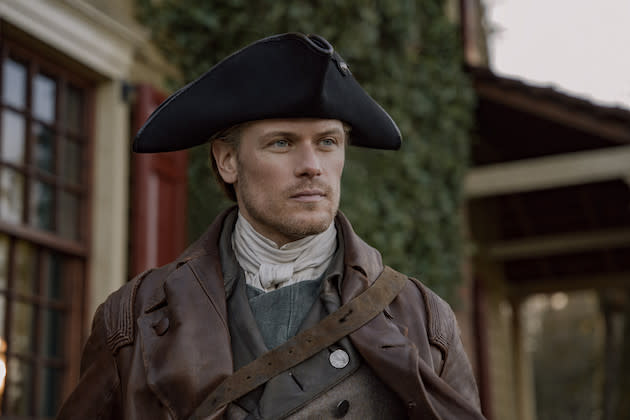 Another member of the Fraser clan comes into the world in this week’s Outlander, but the birth isn’t the happy affair we might hope it would be.

The sadness comes not from the fact that Marsali and Fergus’ newest child, Henri-Christian, is a dwarf, but from his sad, drunken father’s inability to see past that.

Read on for the highlights of “Allegiance.”

JAMES FRASER: INDIAN AGENT | As part of his new position as Indian Agent, Jamie visits a Cherokee village with Ian in tow. The chief says he wants more guns. “Who doesna?,” Jamie jokes, but the man isn’t laughing. Jamie points out that the king isn’t likely to arm the Native Americans, who may switch sides if and when a war breaks out. The chief counters that the Cherokee can kill very efficiently without guns, thank you very much. Jamie says he can’t promise anything, but he’ll see what he can do.

The chief invites Ian and Jamie to spend the night, so they do. Big Red is woken from his slumber by a surprise visitor – think of her as a diplomatic emissary from the tribe — and he isna happy about it. “Ian?” Jamie whisper, alarmed at the woman’s handsiness, “There is a woman in my bed.” Unable to contain his chuckling, Ian corrects him: “Two of them, Uncle. The other one’s waiting her turn.” As the other woman moves in for some fun, Jamie ineffectually tries to stop their ministrations. “Madam, cease,” he says. “The two of you!” (Ha.) Eventually, with Ian translating, the women retreat — but one of them makes it known that she liked Jamie’s package. “Ye’d be advised to stifle yer glee,” Jamie says, red-faced, to a laughing Ian.

THE PROBLEM AT HAND | Back on Fraser’s Ridge, as Claire takes the stitches out of Tom’s hand, he tells her he won’t have her fix the contracture on his other paw because the condition clearly is God’s will. She understands that he’s afraid of the pain and tries to mitigate that by explaining ether to him, but then Malva comes in and her father warns her that “the Devil finds work for idle hands.” And in this case, he’s actually right! But more on that later in the season, I’m sure.

The next day, during an exam at Marsali’s house, Claire notices that her insanely pregnant daughter-in-law is on edge. And that, plus the bruises on the younger woman’s body, make Claire flat-out ask if Fergus has been hurting her. Marsali says she instigated a physical fight, and he reacted in kind, and that all of it stems from his feelings of guilt about not being around the night that Lionel Brown’s men kidnapped Claire and knocked Marsali unconscious. The mention of the attack so greatly unsettles Claire that, when she’s back in her surgery, she wastes no time soaking her ether mask and taking a few big whiffs to escape her PTSD.

WELCOME HOME, JAMMF | She’s recovered by the time Jamie comes home, and good thing, because James Alexander Macolm Mackenzie Fraser wants to play hide the haggis. “I’ve missed ye,” he tells her, dropping his belt. “I must have ye.” And so he does; far be it from me to cast aspersions on the Great Scot himself, but that was quick, no? Afterward, they engage in typical pillowtalk: He asks her whether the Cherokee sided with the loyalists or the rebels in the American Revolution, and she sadly says she doesn’t know.

DEAD AGAIN | When Ridge-dweller Hiram Crombie’s mother-in-law dies, Tom Christie asks Roger to perform the funeral service. So everyone gathers in the meeting house… and are shocked when the dead woman starts moving! Claire rushes in, quickly discerns that the old woman has had an aortic aneurysm and is still alive but won’t be for much longer. There’s enough fight in her, though, for her to get into a fight with her family about the memorial they’ve pulled together for her. After the sin eater shows up (not gonna lie, I felt smug about knowing what one was — thanks, Sleepy Hollow!), the almost-corpse is mollified. As she starts to fade, she tells Hiram he’s a good lad, and she’s not afraid. Then the old woman goes, for real this time.

HENRI-CHRISTIAN’S FRAUGHT ENTRANCE | And now, the hard stuff. Marsali goes into labor, but everything is off: The baby’s not moving, her contractions are irregular, and Fergus is nowhere to be found. Claire sets her up in the surgery while Roger rides to the still and finds Fergus there, drunk. “For tonight, pull yourself together and be the man that Marsali thinks you are,” Roger says firmly.

Back at the Big House, Marsali can tell Claire is worried, and holding back tears, she asks for paper and ink to write a (final) letter to her mother, Laoghaire. But then Fergus shows up and you can tell it’s a great relief to his wife. Soon, though, it becomes clear that Fergus is… wait, is he pawing at her boobs? He explains that stimulation of this type can be an aid to labor, and he learned about it in the brothel. Claire discreetly steps out of the room just as Fergus is mouthing at his wife’s nipple, so she doesn’t hear the fear in Marsali’s voice. “Fergus, I think I’m gonna die,” she confesses. He says all women think that. “Aye, that’s because a great many of them do,” she (correctly) asserts. But he says she won’t, because “I’ll not let you go.”

Things progress from there, and when the sex sounds coming from the surgery get a wee bit loud, Jamie and Bree suddenly find reasons to be elsewhere. But Malva, who’s there because she’s become Claire’s newest medical apprentice, is intrigued. “Some women… like it?” she asks, and when the Sassenach replies in the affirmative, Malva assumes she means “sinners” and “hoooooooors”? Claire smiles ruefully just says that “Many women, they enjoy it.”

Fergus’ technique works, and Marsali has the baby soon after. But when Claire hands the infant boy to his father, Fergus looks stricken and hands the baby back before stumbling out the door. Claire brings the child to Marsali, gently explaining that her new son is perfectly healthy but is also a dwarf. Marsali beams down at the baby with love in her eyes and says he’s beautiful.

IAN HAS HIS SAY | Back to the Cherokee. Ian is mad that Jamie hasn’t relayed the chief’s request for weapons to the British, and he vows that if Jamie won’t help the Native Americans, he will. Then Jamie gets mad at Tom Christie, telling him that the building he keeps referring to as a “church” will actually be a Freemason-style meeting house, which will welcome everyone — and if anyone breathes anything about Claire being a witch, they’ll be sorry. Angry, Tom goes home and uses the slightest provocation to rip into Malva, saying she has the same “dark soul” as her mother, “and you know what became of her.” But when he makes her pull up her skirts so he can whip her, his pained hand can’t hold the belt. So she stands up and looks at him rather devilishly indeed. Is it any wonder that, not long after, Tom is at the Big House, telling Claire that “God brought you to me for a reason” and that he’ll have the surgery after all?

In other Ridge news: Bree and Roger are trying to have another baby, and she’s invented matches — news that fails to rouse much excitement from her family when she announces it. (Side note: Not gonna lie, I missed the freakout she has in the book when this development is met with a whole lotta “meh.”) Also, we learn that Ian had a child when he was living with the Mohawk.

Speaking of Ian: Jamie’s had a change of heart about asking Major MacDonald for guns for the Cherokee. “He fights for them because they are his family. His allegiance is to them, and my allegiance is to him,” he says. Claire agrees it’s the right thing to do, “come what may.”

Now it’s your turn. What did you think of the episode? Sound off in the comments!