Abd Al-Aziz Al-Khazraj used a young boy in the YouTube video from April 3, to represent a wife.

He begins by saying: “Dear viewers, many people – especially people who are married – would like to know how to beat one’s wife.

“Is beating your wife necessary? Must a man beat his wife every day? No.”

The cleric goes on to remind the viewers that Islam is a merciful religion, before saying Muhammad “prevented men from hitting their wives in the face”.

He tells Muslim husbands that beatings should be light and painless and that it should remind the wife of her husband’s masculinity and strengthen, as well as her own feminity.

“The leader of the house may decide to discipline the wife so life can move on,” Abd adds.

“How does a husband beat his wife? He gives her a disciplinary beating out of love. He loves her.

“First, he must admonish her – in other words, he should advise her. Then, he should refrain from sharing a bed with her. If all of this doesn’t help, we start the beating as a last resort.” 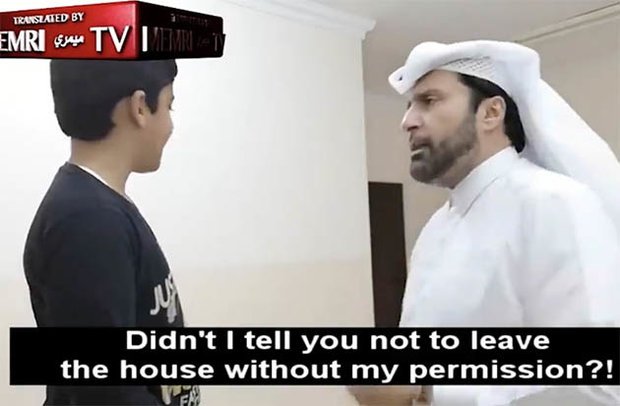 “Brothers, why do husbands beat their wives? Because some wives like domineering and authoritative husbands. By nature, they like violent and powerful husbands.

“With some women, admonishing them and refraining from sharing their beds won’t help. The only thing that helps with such women is beating. She needs to feel that you are a real man. That’s her nature.

“Dear brothers, I hope you understood the right to discipline a wife in Islam. We must not start asking questions about whether our religion is cruel. No, our religion is a religion of mercy and kindness.”

On Monday night, the third holiest mosque had a fire break out at the same time the Notre Dame Cathedral fire.