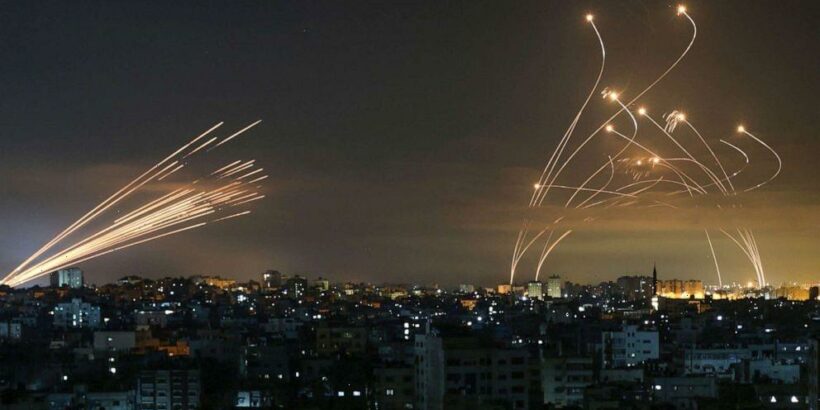 LONDON — More than 100 civilians have been killed and over 1,000 wounded as the latest round of fighting between Israel’s military and Hamas, the Palestinian militant group ruling the neighboring Gaza Strip, hurtled toward an all-out war with neither side showing any signs of backing down.

So far, a total of 122 people, including 31 children and 20 women, have died in the Gaza Strip since tensions escalated Monday. At least 900 others have been injured, according to the Palestinian Ministry of Health.

Meanwhile, a total of seven people, including a soldier and a 6-year-old, were killed in Israel. More than 523 others have been wounded, according to the Israel Defense Forces. An eighth Israeli citizen, an 87-year-old woman, also died after falling while on her way to a bomb shelter, according to the Israeli emergency service.

Friday marked the fifth straight day of fighting between the two sides amid growing fears that Israel’s military would launch a ground invasion of the Gaza Strip. The IDF said early Friday that ground forces, including tanks and artillery, were now firing into the blockaded Palestinian territory from the Israeli side of the border while aircraft continued to strike targets. The IDF said there were currently no Israeli boots on the ground in the Gaza Strip, after a spokesperson erroneously told ABC News that troops had entered the territory. The spokesperson said the error was due to a miscommunication between forces and his media team.

Nevertheless, the deployment of ground troops along the border signaled an escalation in the ongoing conflict, which is reportedly the worst outbreak of violence between Israeli forces and Hamas since a 50-day war in the summer of 2014.

“The last word was not said and this operation will continue as long as necessary,” Israeli Prime Minister Benjamin Netanyahu said in a statement early Friday.

Hamas, which gained a majority in the 2006 Palestinian legislative elections and took control of the Gaza Strip in 2007 after battling rival Palestinian forces, began firing a barrage of rockets toward Israeli territory on Monday evening. In response, the IDF unleashed hundreds of airstrikes aimed at what it said were Hamas and other terror targets in the Gaza Strip, a 140-square-mile territory where 2 million Palestinians have lived under a blockade imposed by neighboring Israel and Egypt since Hamas seized power.

The IDF said that Hamas and Islamic Jihad, a smaller Palestinian militant group, have fired more than 1,750 rockets from the Gaza Strip into southern and central Israel since Monday, of which approximately 300 misfired and exploded inside the Palestinian territory. Israel’s air defense system, known as the Iron Dome, has intercepted 90% of the rocket attacks, according to the IDF.

“The fact that there aren’t more casualties in Israel does not mean that Hamas isn’t trying to kill Israeli civilians,” the IDF said in a statement Friday morning. “It simply means that the IDF is preventing them from doing so at an incredible level. The Iron Dome Aerial Defense System and easily-accessible bomb shelters all over Israel have saved thousands of lives. IDF troops will continue to work 24/7 to defend Israeli civilians at the highest level possible and minimize Gazan casualties wherever possible.”

The rockets were aimed at various Israeli cities, including Jerusalem and Tel Aviv, with some striking multiple homes as well as a school, a hospital and a bus, according to the IDF.

Hamas, claiming to be defending Jerusalem, has said that Israel bears responsibility. The group aims to establish an independent Palestinian state that includes parts of modern-day Israel.

Meanwhile, Israeli airstrikes have hit more than 650 terror targets in the Gaza Strip, according to the Israeli military, including rocket launch sites, attack tunnels and three high-rise buildings that Israeli officials said were used by Hamas. The IDF said it warned civilians to evacuate before striking the targets.

The IDF said Thursday that it was calling up some 9,000 reservists. As Israeli troops began amassing at the Gaza frontier that night, the IDF ordered all Israelis living at the border to go into their safe rooms and remain there until further notice.

Throughout Thursday night and into Friday morning, the IDF said 160 aircraft were targeting an underground network of tunnels that Hamas had dug in the northern Gaza Strip.

The Palestinian Ministry of Health said the Israeli airstrikes have destroyed at least 500 homes in the Gaza Strip, along with 60 government buildings and three apartment towers. Some 23 schools and universities have also been damaged, while 24 factories and industrial establishments have been damaged or destroyed. Scores of people have been displaced and are taking shelter at a United Nations-run school due to a lack of bomb shelters, according to the Palestinian Ministry of Health.

Sacha Bootsma, director of the World Health Organization’s office in the Gaza Strip, told ABC News on Friday that there was a major shortage in medical supplies and fuel, as hospitals were currently running on ventilators.

The United States has deployed its deputy assistant secretary of state for Israel and Palestinian affairs, Hady Amr, to the Middle East to meet with leaders from both sides in the coming days. President Joe Biden had a telephone call with Netanyahu on Wednesday, while U.S. Secretary of State Antony Blinken has spoken to leaders on both sides.

Israel and the U.S. both consider Hamas a terrorist organization. The U.S. government has voiced support for a two-state solution to the Israeli-Palestinian conflict, which would create an independent Israel and Palestine.

Conflict between Israelis and Palestinians has raged on for decades, but tensions have heightened in recent weeks over a long-running legal battle on the potential expulsion of Palestinians from their Jerusalem homes.

Hundreds of thousands of Palestinians fled or were displaced from their homes during a war that accompanied Israel’s creation in 1948. Some Palestinian refugees were rehoused in east Jerusalem by the Jordanian government in the 1950s — before Israel captured the city from Jordan during the 1967 war. Now, several Palestinian families are facing possible eviction from land that Jewish settlers claim they lost to Arabs during the 1948 war. Israeli law allows citizens to take back such land but it does not allow Palestinians to do the same.

On Sunday, the Israeli Supreme Court decided to delay a ruling on the case by up to 30 days after the attorney general requested more time to review.

Just days before Hamas and Israeli forces began trading rockets and airstrikes, hundreds of Palestinian protesters and dozens of Israeli police officers were injured in clashes in the Old City of Jerusalem at a sacred site known to Jews as the Temple Mount and to Muslims as the Noble Sanctuary. The compound is considered the holiest place in Judaism because it was the site of two ancient temples. It’s also home to Al-Aqsa Mosque, one of the holiest structures in Islam, and the Dome of the Rock, an Islamic shrine.

Dozens more people and officers have been injured in recent days amid wide-scale riots and violence between Arabs and Jews on the streets of various Israeli cities, according to Israeli police.

Israel’s prime minister has condemned the rioting and violent clashes as “unacceptable.”

Six Palestinians were shot and killed by the Israeli army in the West Bank on Friday, amid clashes between Palestinian protesters and Israeli security forces, according to the Palestinian Ministry of Health. Five were killed while throwing stones at Israeli forces in several locations across the territory, while a sixth was killed during an attempt to stab an Israeli soldier, the ministry said.