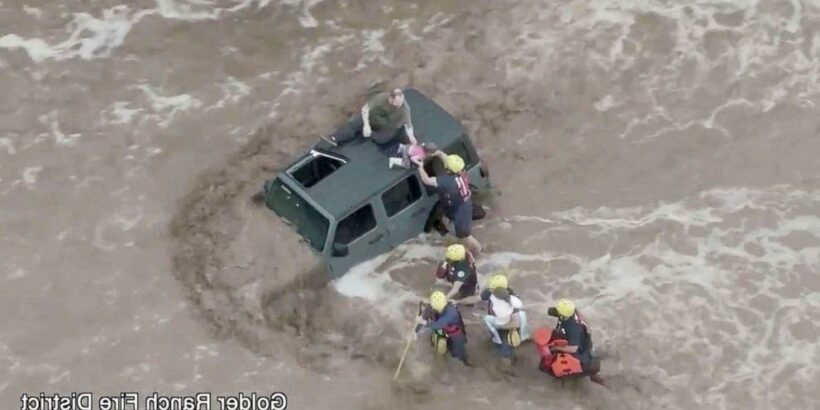 Over 55 million Americans are at risk for flash flooding this weekend as severe weather heads toward the Northeast.

Portions of the Northeast are nearly five times wetter than average for July so far. New York and Boston both could approach all-time wettest July before the month’s end.

Tornadoes and damaging winds are also possible in the Northeast today.

The system is moving east this morning and will bring more heavy rain to parts of the Ohio Valley and ultimately into the Northeast. Severe storms, including the risk for possible tornadoes and damaging winds will be possible from Maryland to New York today, including Philadelphia and New York City.

Flash flood watches are in effect from Indiana to Massachusetts. The rainfall threat across parts of the Northeast is particularly concerning. The region is well above average for rainfall.

On top of the flash flood watches, severe thunderstorm watches are now in effect across a large swath of the Northeast as well, including Washington, D.C., Philadelphia, and New York City. Strong to severe thunderstorms are already firing up in parts of the region.

One of these stronger thunderstorms are already impacting parts of northeastern New Jersey into New York City…and it’s moving very slowly. The worst of it right now is from Elizabeth to Jersey City, New Jersey, where a flash flood warning has just been issued.

New York City has had 8.49 inches of rain so far for the month of July. To put that in context, New York City’s average rainfall for all of July is 4.60 inches. The wettest July on record in New York city is 11.89 inches.

The precipitation forecast for storms Saturday and Sunday shows locally over 3 inches of rain. While not a certainty, it is looking possible, that Northeast cities will be approaching or exceeding their wettest July on record — and that may happen this weekend, in spots.

Flash flooding is a concern. As the ground is very saturated, the heavy rain will likely cause flash flooding very quickly.

Meanwhile, in the West, a heat wave is persisting across parts of the region, but it is not nearly as bad as the last few heat waves have been. In fact, there are only a couple of records being threatened over the next few days.

More concerning is the risk of dry lightning across California and Western Nevada on Sunday night. Dry lightning can quickly start wildfires, that will quickly burn out of control.

Additionally, more monsoon-related flooding will be possible across Arizona and New Mexico.

Dozens of uncontained large wildfires continue to burn in the West, including:

-The Dixie Fire burning in northern Califormia in Butte County at 9,847 acres and 12% contained.

-The Bootleg Fire burning in southern Oregon, north of the town of Beatty, now at 281,208 acres, 22% contained.

-The River Fire burning in Mariposa County, California, at 9,656 acres and 64% contained.

-The Snake River Complex Fire burning in west central Idaho, not far from the Oregon state line is at 103,907 acres, 31% contained.