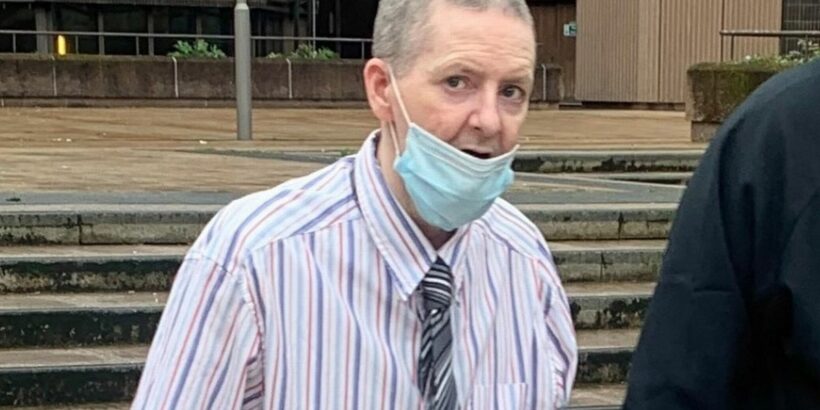 A couple have been banned from ever owning a dog again after a court heard they stood and watched as their American Bull Dog savagely attacked a delivery driver who was bringing them medication.

Simone Williams and Geoffrey Thompson both watched as their American Bulldog, named Cesar, raced from their home and dragged delivery man John Moran to the ground.

Mr Moran was left with permanent nerve damage and PTSD after the then five-year-old dog sunk its teeth into his feet, arms and hand, thrashing around causing him "extreme pain".

The couple, from Bootle, Merseyside, were spared jail but told they can never own another dog after the horrific attack.

Graham Roberts, prosecuting today at Liverpool Crown Court, explained that Mr Thompson is in ill-health and requires medication to be delivered to his door.

Mr Roberts said neighbours had previously raised concerns about Cesar as he "could be aggressive towards other dogs and people" and they would see Williams "sometimes struggle to control Cesar on his lead".

A neighbour reported one worrying incident, reports the Liverpool Echo when Cesar had been approached by a child and "was aggressive" but the parent managed to pull their child away in the nick of time.

On August 2, 2019, John Moran was delivering medication to the Bootle address with an assistant, Ambrose Clarke.

As Williams signed paperwork Cesar appeared in the hallway and "ran past Williams, past Mr Moran towards Mr Clarke".

Clarke was able to get to safety outside the garden, which is when the dog rounded on Mr Moran.

The delivery man was "dragged to the ground" as Cesar "thrashed around causing 'extreme pain'".

Roberts said Williams and Thompson "didn't appear to make a great deal of effort" to get the dog off the helpless victim.

Mr Moran punched the dog and managed to jump over a fence, after which he was given first aid by an ex-army paramedic neighbour.

Thompson later told police the living room door was broken and claimed Cesar was "just protective" and was "just going for his shoes", claiming Mr Moran "lost his footing".

In an interview, Williams said Thompson had shouted as the dog ran out and she screamed which she thought "spooked the dog".

In a victim personal statement, Mr Moran said he is suffering from PTSD four months after the attack and has suffered permanent nerve damage to his left foot, hand and arm.

Des Lennon, defending Williams, explained she "recognises and accepts" the seriousness of the case.

He said she was in a "state of shock" when the dog attacked Mr Moran, and explained she had attempted to and been unsuccessful in blocking the dog's path.

Both admitted owning a dog dangerously out of control that caused injury.

Judge Andrew Menary, QC, sentencing, said the dog was known to be aggressive "particularly when its territory was challenged".

The judge said there were "some worrying aspects about this case" in particular "whether this was a dog properly exercised".

Judge Menary said the pair showed "very little insight" into the damage that "could be caused by a dog of this sort”.

The judge said they are "unfit" to "have had and in the future to have ownership or possession of any dog at all".

Judge Menary said the attack was "entirely predictable given the nature of this dog".

Thompson and Williams were both handed a four month sentence suspended for one year.

He must pay £500 in compensation to Mr Moran while Williams must complete 20 Rehabilitation Activity Requirement days.

Both Thompson and Williams were banned from owning dogs for life.

The judge ordered that the dog would be given to the care of Carla Lane Animals in Need where Cesar will be rehabilitated.