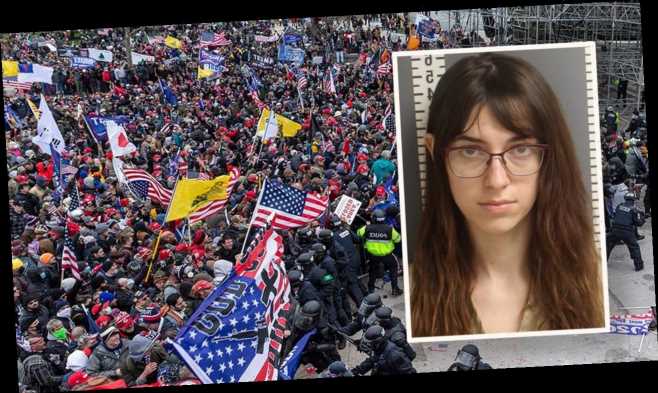 A Pennsylvania woman accused of stealing a laptop from House Speaker Nancy Pelosi’s office as rioters stormed the U.S. Capitol was released to home confinement Thursday.

But the defense attorney representing 22-year-old Riley June Williams argued in Harrisburg Federal Court that her client’s allegedly abusive ex-boyfriend exaggerated when he called an FBI tip line claiming that Williams intended to have the laptop sold off to a Russian spy agency.

Magistrate Judge Martin Carlson ordered Williams to be released to home confinement without bond. She is to be fitted with GPS monitoring and must surrender her passport. Her travel is restricted to the Middle District of Pennsylvania, with exceptions for other court appearances in the districts of Maryland and Washington, D.C. She had been held at Dauphin County Prison since her arrest Monday.

WHERE IS THE LAPTOP STOLEN FROM NANCY PELOSI’S OFFICE

“I want to note for you that one of the reasons you are going home today is because, in a desperate time in the glare of public scrutiny, your mother has stepped forward and promised to serve as a third-party custodian,” Carlson said, referring to the defendant. “Your mother is making an enormous leap of faith on your behalf.”

Williams did not contest to probable cause or to the charge of theft of government property. Her public federal defender, Lori Ulrich, refuted the idea that Williams had tried to flee authorities, instead arguing that she was dealing with an abusive ex-boyfriend against whom she filed a restraining order and, at the advice of a police officer, she had therefore changed her phone number.

“It is regrettable that Ms. Williams took the president’s bait and went inside the Capitol. However, based on our initial investigation and preparation for today, it is our position that the allegations surrounding the theft of Speaker Pelosi’s computer came in part from a former abusive boyfriend, witness one, who is in the affidavit of probable cause,” Ulrich told the judge. “He has threatened Ms. Williams, in a number of ways, including she filed a restraining order against him. He was going to go after her. These accusations are overstated.”

Williams, who reportedly turned herself in before her arrest Monday, was initially charged with knowingly entering or remaining in any restricted building or grounds without lawful authority, violent entry and disorderly conduct on Capitol grounds.

Theft of government property and obstruction charges were added Tuesday.

An amended statement of facts submitted in court that day cites an unnamed witness, identified as Williams’ “former romantic partner,” who called an FBI tip line after seeing footage online of a woman he believed to be Williams inside the U.S. Capitol on Jan. 6. 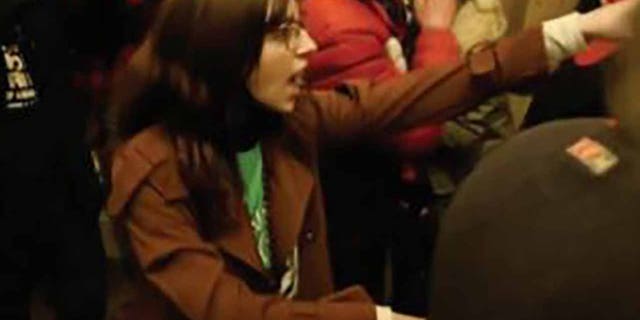 Video showed Williams guiding other rioters up toward a staircase up to Pelosi’s office. (Justice Department)

That witness also told investigators Williams intended to send the laptop stolen from Pelosi’s office to a friend in Russia, who then planned to sell the device to SVR, Russia’s foreign intelligence service, the court documents state. According to the witness, “the transfer of the computer device to Russia fell through for unknown reasons” and Williams “still has the computer device or destroyed it.”

The current whereabouts of the laptop remain under investigation, the document states.

Its location was not discussed in court Thursday, Fox 29 Philadelphia reported.

The witness referred investigators to a video clip from a broadcast by British television network ITV reposted on YouTube that showed a woman he believed to be Williams ‒ wearing a green T-shirt and brown trench coat and carrying a black-and-white striped zebra print bag over her shoulders ‒ inside the Capitol on Jan. 6, according to the amended statement.

In the video, Williams repeatedly yelled, “Upstairs, upstairs, upstairs,” while directing a group of intruders up the staircase leading to Pelosi’s office. Additional photos obtained by the FBI purportedly showed Williams wearing the same outfit in other areas both inside and outside of the Capitol. 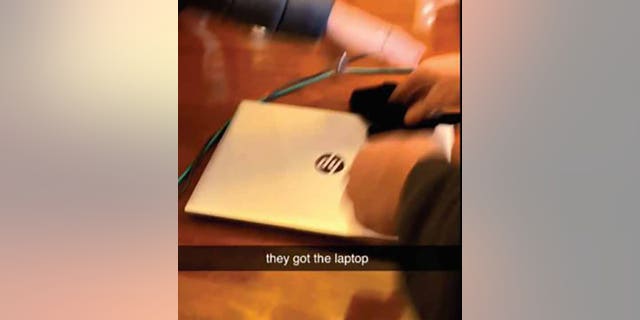 Another video allegedly recorded by Williams showed the Hewlett-Packard laptop on a wooden desk. (Justice Department)

A video believed to be recorded and live-streamed by Williams had the camera directed toward a wooden desk with an “HP” laptop. Text across the clip reads: “they got the laptop.” The Justice Department shared a screenshot of the video.

Williams is also accused of bragging about stealing the laptop on the social media platform Discord.

Security camera footage also showed Williams both entering and exiting Pelosi’s office on Jan. 6, the document ‒ written by an FBI special agent at the Manassas, Va., office, with the Cyber Crime Section ‒ states. The agent’s name was redacted.

Pelosi’s chief of staff Drew Hammill previously said that the laptop was taken from a conference room and it was a device used for presentations. Pelosi said in an interview aired on MSNBC Tuesday that although she is “not concerned” about that particular laptop, for individuals to take the device from her office, “is a violation not only of my office but of my connection to my constituents.”