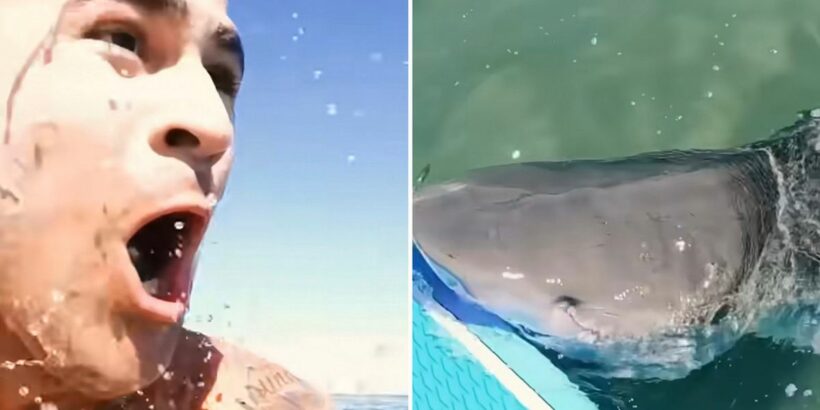 A huge tiger shark lunged at a paddleboarder and chomped through his board, throwing him in the water as the beast looked for prey.

Brodie Moss filmed remarkable footage as the massive predator tried to catch a giant turtle just inches below his toes, and narrowly missed him, biting through his paddle board instead.

During the terrifying incident in the ocean off Western Australia, Brodie can be seen finding himself in the middle of the predator and prey and soon realises the danger he is in.

Brodie is seen in the video saying: "Oh this is intense, they're underneath me. Oh, I don't know if I'm in the best position right here. Oh, I'm between a tiger and a turtle. Uh oh!"

He crashes into his water along with his camera, which falls to the seabed.

"Tiger shark and this turtle – big showdown, and I'm right in the thick of it," he adds.

The shark lunges itself out of the water and bites into the paddleboard, leaving Brodie into the sea but fortunately he was unharmed in the nail-biting incident.

The footage was shared by Brodie to his one million Instagram followers and on his YBS Youngbloods YouTube channel. He wrote alongside the video on Instagram: "A humbling reminder for myself that it’s their ocean and I’m just a visitor!

"I love sharks and this little accident was not the big fella's fault."

YouTuber Brodie, 32, regularly posts camping and fishing video along the Western Australia coast to his subscribers after quitting his job as an electrician in 2019.

His videos now regularly rack up millions of views which has enabled him to focus on being a full time YouTuber.

He told ABC : "I started making enough money to cover my bills and in the end, my full-time job as an electrician was getting in the way of being a YouTuber.

"(Quitting) was kind of spooky. I had bills to pay, I had a mortgage and a full-time job.

"I was pretty narrow-minded, I thought that I had to have a full-time job, that there wasn't much money to make on social media."

Western Australia is notorious for being one of the top shark attack places in the world as back in November 2020 a bodyboarder was mauled to death near Broome, which was the eighth lethal attack that year.