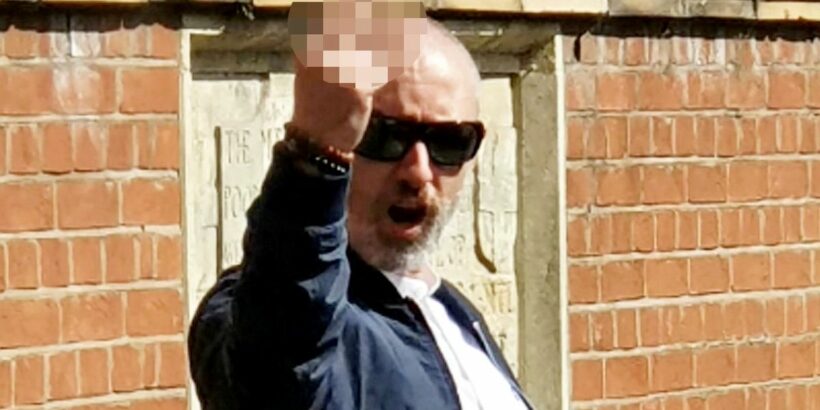 A sick paedo gave a two-fingered salute to journalists just moments after being spared jail.

It was the second time that 43-year-old Gary Sanders, who was found guilty of downloading indecent images of children, avoided going to prison.

Despite pleading guilty to four counts of possessing indecent photographs of children on his mobile phone, he was only given a three-year community order including 55 rehabilitation activity requirement days and a five year sexual harm prevention order.

READ MORE: Desperate woman in tears as neighbour tell her she's not allowed to use her own garden

The judge also told Worcester Crown Court on Friday (August 19) that he was confident the man would offend “again and again” – only for the perv to leave the court and give the awaiting press a special wave.

Sentencing, Judge James Burbridge QC said the images contained "real victims that have been abused so that images can be shared."

He said Sanders had put the court in a difficult position with his serious offending, explaining he could justifiably jail him for a "moderate" amount of time.

But the judge added: "I'm not sure that would benefit the public. The concern is you will do it again and again."

They discovered 15 category A images, the worst level identified within the sentencing guidelines, downloaded between May 21, 2016, and December 7, 2021.

Mr Scott said there were also 27 category B images and 205 category C images, downloaded between the same dates.

And 13 prohibited images of a child, downloaded on December 7, 2021, were also found by police.

Mr Scott also described some of the graphic nature of the images which involved children as young as six-years-old.

Andrew Davidson, defending, said when Sanders was given the suspended jail sentence in 2017 he had not been ordered to take part in a sexual harm programme.

He added: "It is clear he needs intervention."

In 2017 the dad was found guilty by a jury of three counts of making indecent images of children.

The court heard the former site caretaker's marriage broke down as his wife "could not move beyond what he had done."

He was previously sentenced to 12 months in jail ,suspended for two years and ordered to pay costs of £2,000.