Paedophile cannibal, 22, tells court he boiled a man’s eye before eating it with 12-year-old ‘girlfriend’ and microwaved victim’s severed head before devouring his brain

The 22-year-old man accused of paedophilia, murder and cannibalism has told a Russian court how he gouged out the eye of his victim, boiled it and ate it with a 12-year-old girl he refers to as his ‘girlfriend’.

Arkady Zverev also confessed to putting the severed head of murdered Alexander Popovich, 21, in a microwave and turning it on the highest setting for three minutes.

He then calmly told the court that he and his alleged schoolgirl accomplice, only known as ‘Valeria’, had eaten the man’s cooked brains. 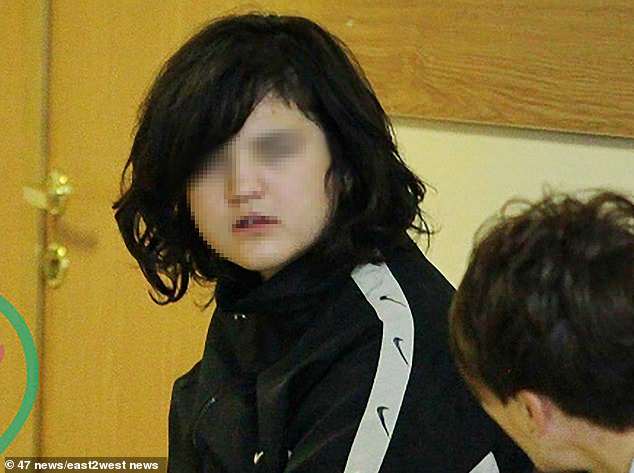 Allegations: The 12-year-old schoolgirl, only known as ‘Valeria’, whom Arkady Zverev refers to as his ‘girlfriend’ is pictured arriving at court in Kirovsky District, St Petersburg, Russia 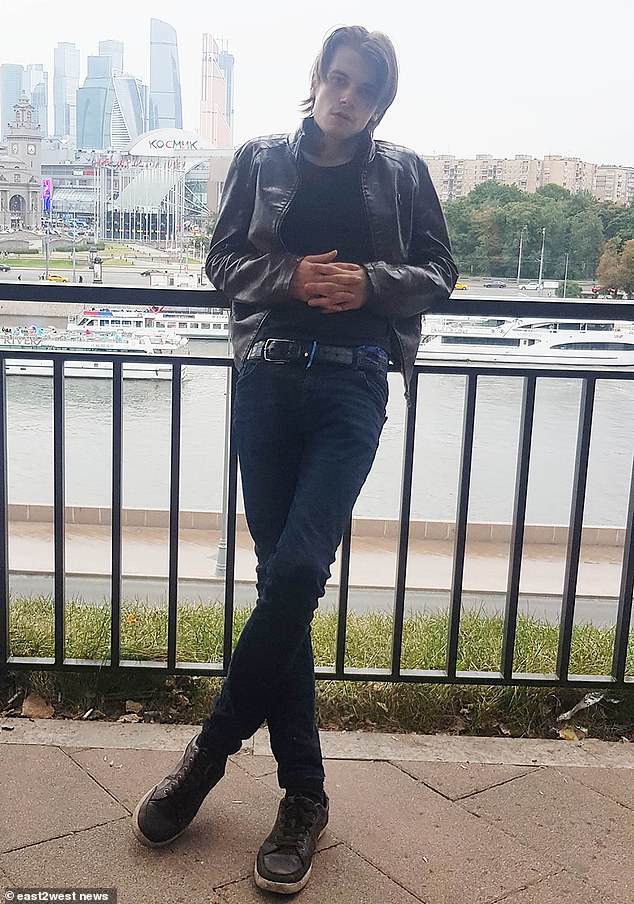 Groomer paedophile: Arkady Zverev, 22, has admitted to killing Popovich, and confessed to having a sexual relationship with the underage girl 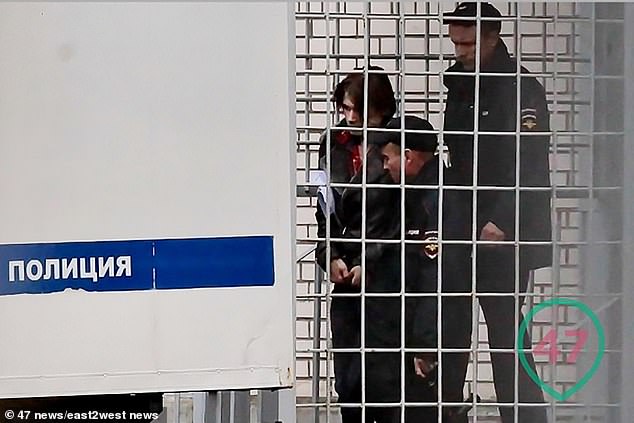 Zverev, pictured arriving in court, said he microwaved the severed head of their victim Alexander Popovich, 21, for three minutes, before eating his brains

But he pleaded with the judge from a metal cage at a custody hearing at Kirovsky District Court near St Petersburg to banish journalists from the hearing, declaring: ‘I do not want fame.’

The court went into closed session due to the young age of ‘Valeria’ who state investigators say took part in killing and eating Popovich.

A pale and dishevelled Zverev was detained in custody for two months to allow further investigations of the macabre case in which he has confessed to axing and dismembering his victim.

Valeria was remanded in a hospital for one month for psychiatric tests, but as she is below the age of criminal responsibility she will not face charges, 47news.ru reports. 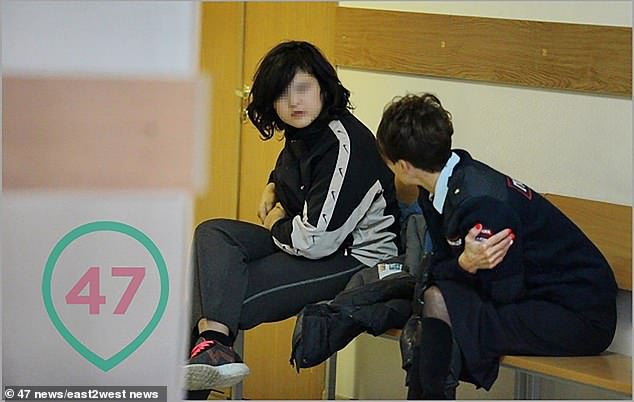 Accused but not charged: As the 12-year-old is below the age of criminal responsibility she will not face charges, but has been remanded in a hospital for one month for psychiatric tests 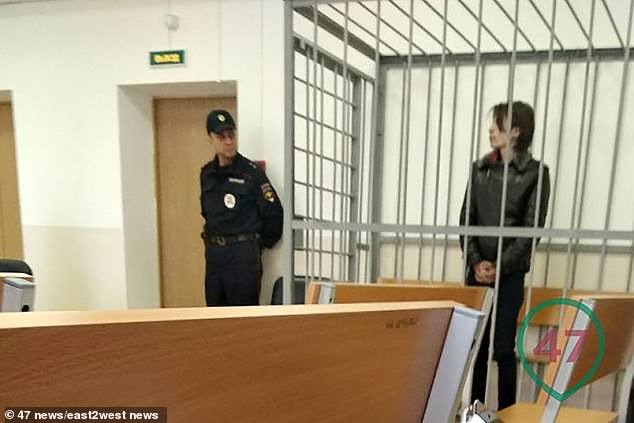 Revelations: Zverev is pictured during his court appearance in St. Petersburg 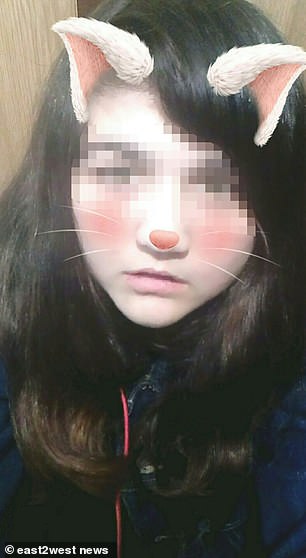 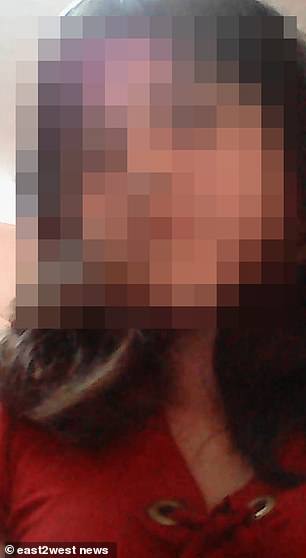 Shocking: The 12-year-old, identified only as Valeria, told police that she cut meat from the chest of victim Alexander Popovich 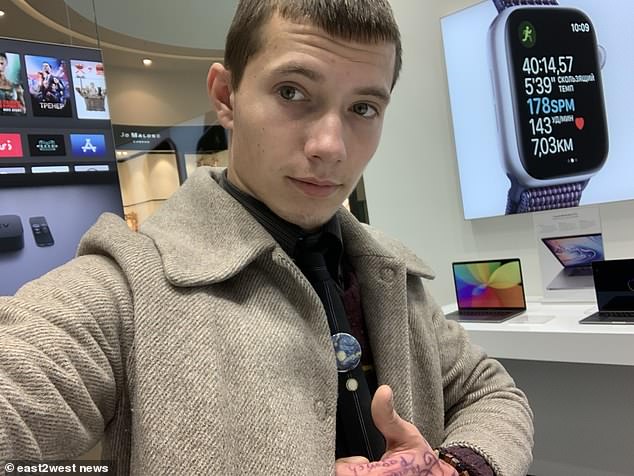 Murdered: The dismembered remains of Alexander Popovich was found in his home in a village 60 miles from St. Petersburg

Evil: Zverev told police he had been the first to stab Popovich, after the two men started a row over the rent for the flat in Novinka village near St Petersburg 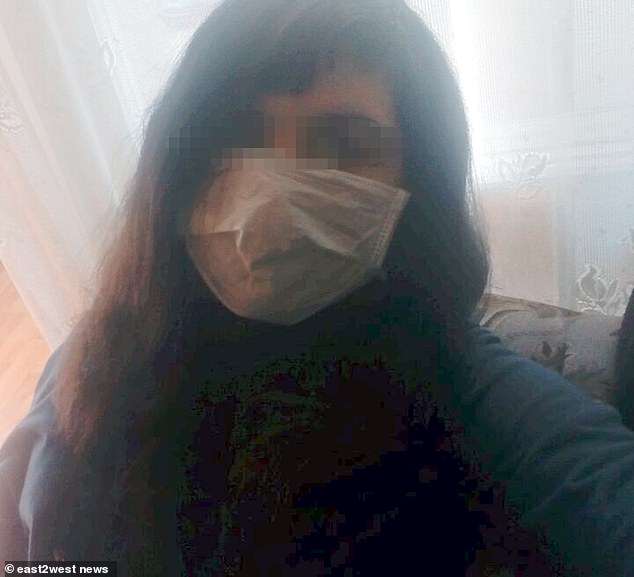 Paedophile: The 22-year-old Zverev referred to the 12-year-old Valeria as his ‘girlfriend’

Zverev reportedly also told the judge he had seen the brains of his ‘previous girlfriend’ after she ‘fell out of a window’ and died hitting the pavement.

Since then he had been ‘curious about the taste’ of brains, he told the judge.

He remembered cooking and eating Zverev’s brains, he said.

He also claimed he had been on holiday in Black Sea resort Sochi and took Valeria away from her home city to St Petersburg after she told him she had fallen out with her parents.

They used an online carpooling service to drive 1500 miles – avoiding train or plane checks on why he was travelling with an underage girl. 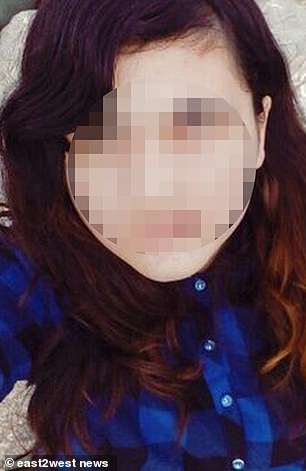 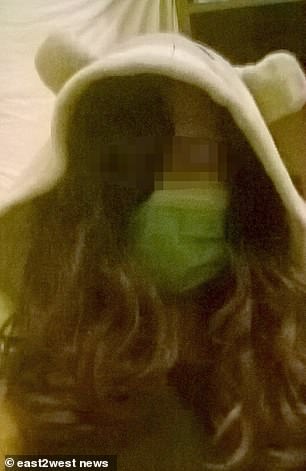 Accused: The 22-year-old man admitted to raping a 12-year-old girl who is also accused of murdering and dismembering victim Alexander Popovich 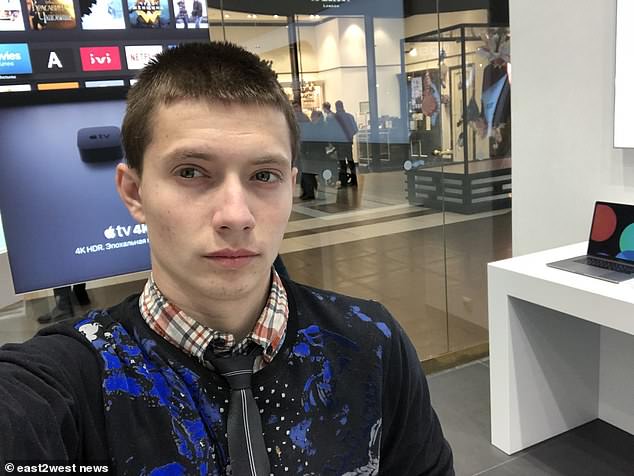 Brutal: Police say Alexander Popovich had been murdered with an axe which had been used to mutilate his body 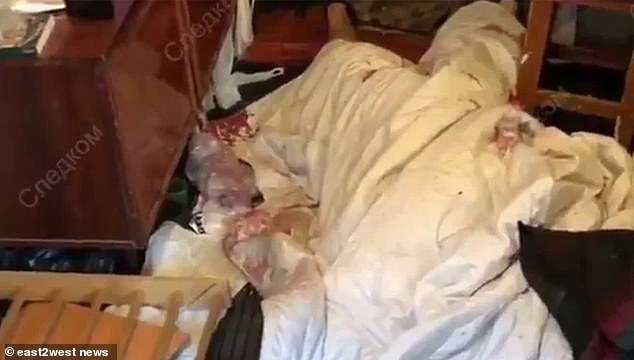 Evidence: The pair had reportedly tried to cook the brains of the victim and covered up his body with a white quilt 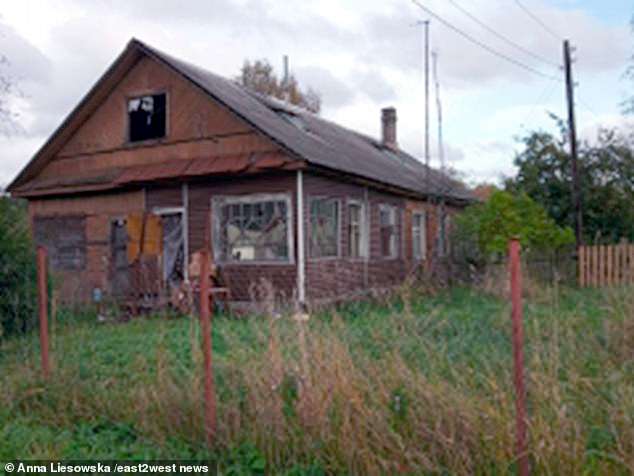 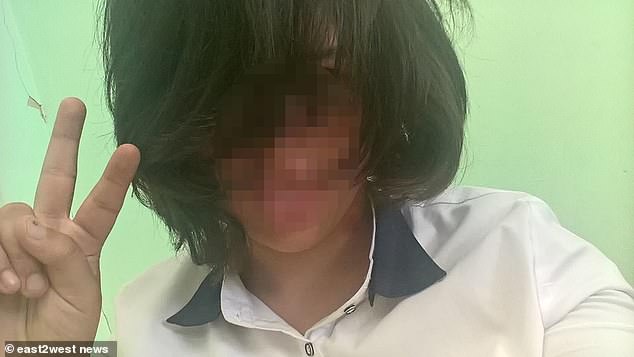 Missing: The girl had been reported missing by her parents ten days earlier in her home city of Sochi some 1,500 miles away, say police 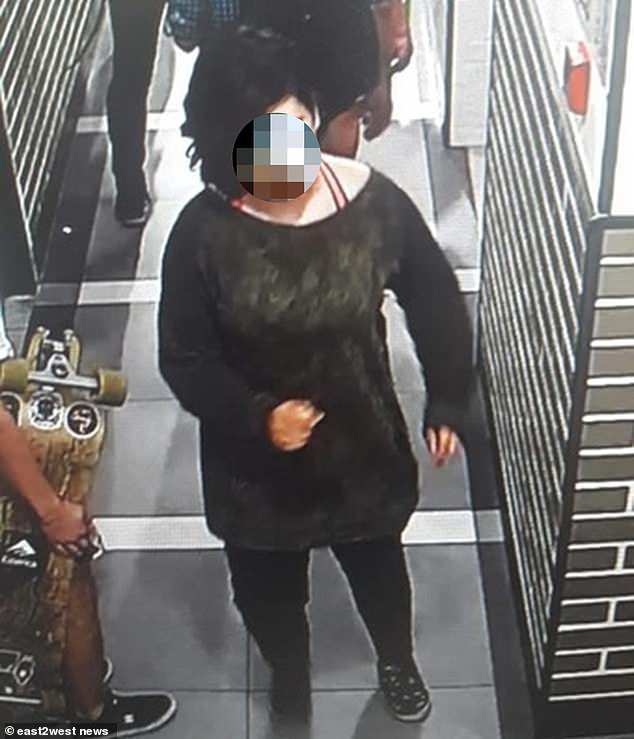 The 12-year-old girl, seen here on CCTV, has been taken into care and placed at an institution called Centre for Underage Criminals of St Petersburg

They then moved to a village after Popovich – who they met in a KFC restaurant – offered them a cheap rent.

He claimed there was a dispute over money after which they killed, dismembered and ate some body parts.

The girl’s mother has refused to travel to St Petersburg to see her in the wake of the murder and cannibalism reports, say the media.

Last week, it was revealed that Valeria had told police officers she had taken part in the killing and cannibalism.

She told detectives how she used a frying pan to cook and eat Mr Popovich’s heart but that she had found the taste ‘too sweet’, and that his brains ‘turned out to be much more tasty’.

The 12-year-old child told officers she had stabbed the man – in whose flat they were lodging – after he went to bed.

Then she opened his abdomen with a knife because she ‘always wanted to see what was inside there’, according to 47news.ru.

Next she says she cut meat out of his chest which she fried, and Zvarev used an axe to behead their victim, and chop off his arms. 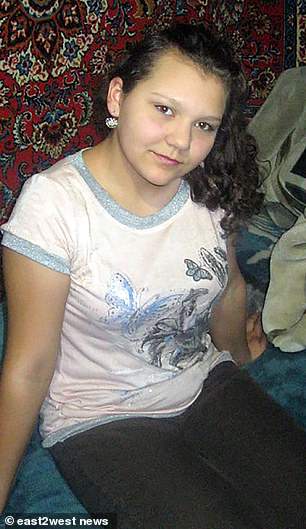 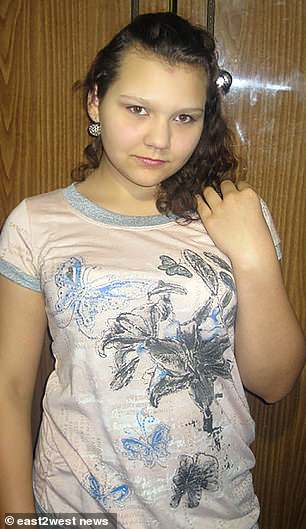 Mystery death: Zverev’s ex girlfriend Olga Semibokova, whom he started dating when she was a young teen, died two months ago after ‘falling out of a window’ 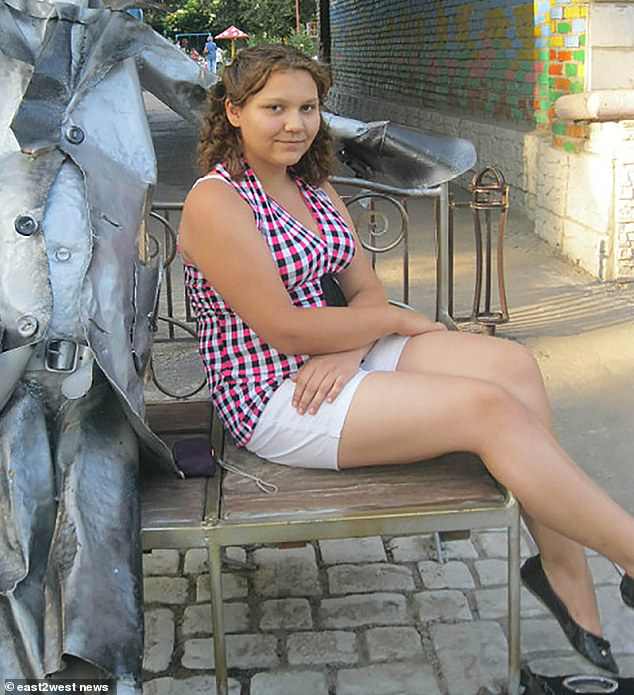 Death: Olga’s family are demanding that the investigation into her death at age 18 be re-opened as they do not believe it was an accident

Zverev, from the Altai mountains in Siberia, previously had a relationship with another underage girl called Olga Semibokova who died after falling from a window, it was alleged today.

This girl was 15 when they began having sex and died two months ago when she was 18.

Her family today claimed her death had not been properly investigated – and asked for the case to be reopened in the light of the cannibal killing.

Tatiana Semibokova, aunt of the dead girl, said Zverev ‘took her away from her family.

‘He seduced a small girl, she thought it was her first love and was devoted to him.’

She absconded with him and lived in Novosibirsk, a city hundreds of miles from her home, she said.

‘How such a monster could attract our girl, we do not know,’ said the aunt.

‘Olga understood that he was a cruel person, but she always justified his behaviour.

‘She said: ‘He lacked parental warmth, I can warm his heart’.’