Pakistan’s interior minister Ahsan Iqbal has been shot in a suspected assassination attempt ahead of nationwide elections due this year.

Mr Iqbal was shot at close range with a 30-bore pistol, hitting him in his right arm as he was preparing to leave a public meeting in Punjab province, senior police official Raja Riffat Mukhtar said.

The suspect, believed to be in his 20s, is known as ‘Abid’ according to Police. 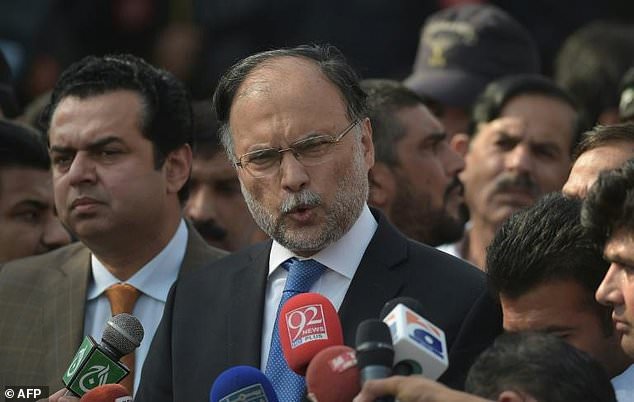 ‘The attacker was about to fire a second shot when police and people in the meeting overpowered him,’ said Malik Ahmed Khan, a spokesman for the Punjab government

Mr Iqbal is undergoing surgery at a hospital in Lahore but his injuries aren’t life threatening.

Mr Iqbal’s aide said the interior minister ‘was targeted’ and confirmed that the attacker had been arrested.

Video footage of his arrival released by the ruling Pakistan Muslim League-Nawaz (PML-N) showed him being lifted from a helicopter on a stretcher, his eyes open as he responded to questions.

The shooting in Iqbal’s constituency of Narowal district drew swift international condemnation, and comes as Pakistan gears up for its second ever democratic transition, with federal polls widely expected this summer. 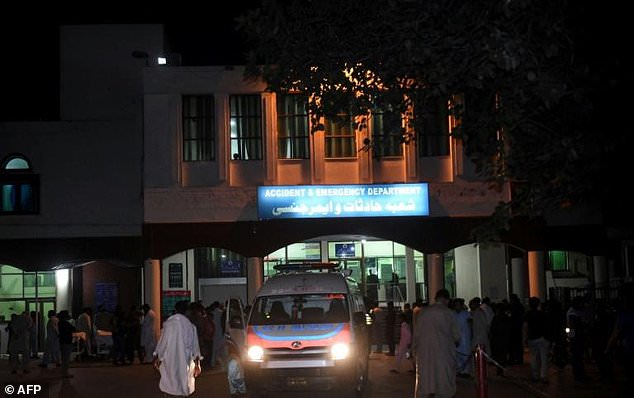 It follows a series of blows to the PML-N, which has been struggling to find its footing since its eponymous leader Nawaz Sharif was ousted by the Supreme Court over graft allegations last summer.

PML-N lawmaker Maiza Hameed told Pakistan’s Geo News that the shooting was an attempt to ‘weaken democracy’ ahead of the upcoming elections.

‘Strongly condemn the assassination attempt on my friend Ahsan Iqbal… Just spoke to him & he is in high spirits,’ tweeted Punjab chief minister Shahbaz Sharif, brother to Nawaz.

‘Those who indulged in this heinous act will be brought to justice,’ he continued. ‘PMLN will not be browbeaten into submission… Prayers for quick recovery!!’