The teenager killed was identified as Azzam Aweida and hundreds of people gathered at his home in the southern town of Khan Younis to attend the funeral. 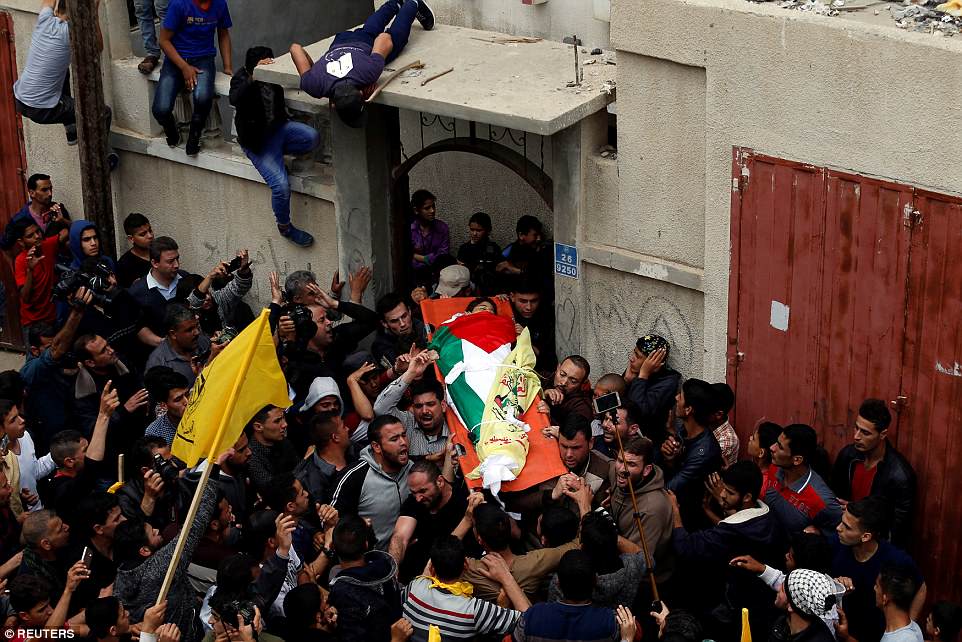 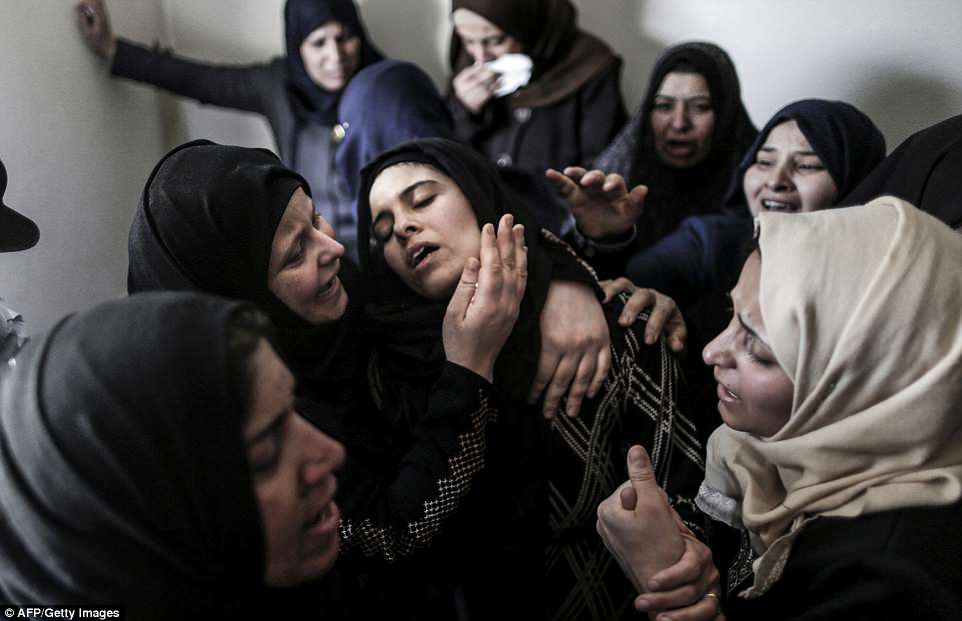 Mourners console Azzam Oweida’s mother, centre, during his funeral. His death brings the number of people killed to four since the recent wave  of protests began five days ago 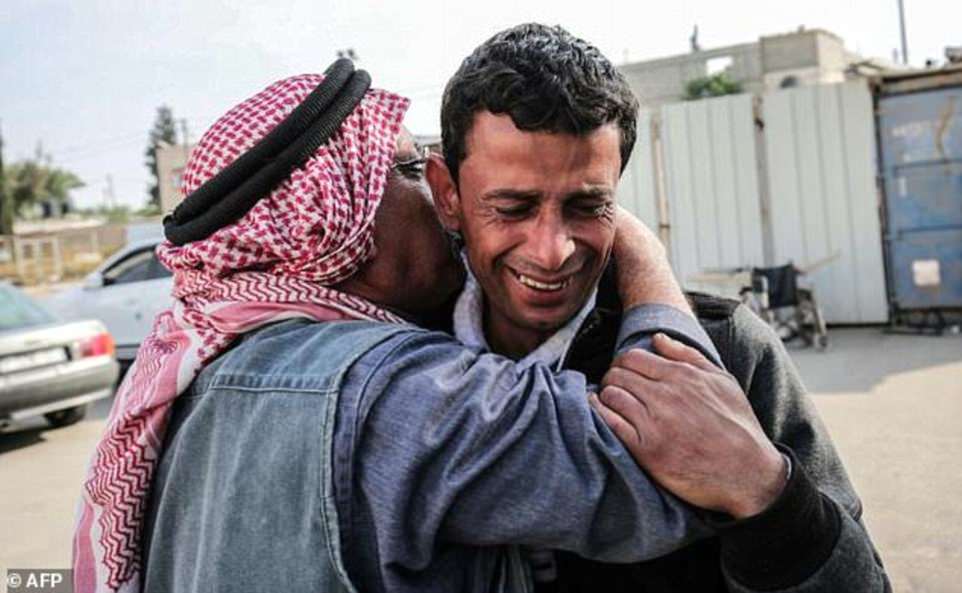 Helal Aweida, Azzam’s father, is consoled by another man outside the hospital where his son was taken after being shot

Mourners carried his body, wrapped in a Palestinian flag, to a nearby mosque for prayers before burial.

‘My son is a martyr and I am very proud of him,’ said his father, Helal Aweida.

His death brought to four the number of people killed or fatally wounded during a fifth consecutive Friday of protests in which thousands of Gazans have gathered near the heavily-guarded border.

Most protesters were peaceful but some threw stones and burned tyres.

The Palestinians say Israel is using excessive force against the protesters with 2000 also wounded during the demonstrations.

Israel says it is protecting its borders and takes such action only when protesters, some hurling stones and rolling burning tires, come too close to the border fence.

Israel’s use of live fire has drawn international criticism.

The U.N. High Commissioner for Human Rights Zeid Raad al-Hussein on Friday called the loss of life deplorable and said a ‘staggering number’ of injuries had been caused by live ammunition.

The Gaza Health Ministry said that three Palestinians were killed on Friday and 200 were wounded by gunfire. The Israeli military said about 14,000 Gazans had been participating in what it described as ‘riots’ and that some had tried to breach the frontier.

Gaza is run by the Islamist Hamas movement, which Israel and the West designate a terrorist organization. 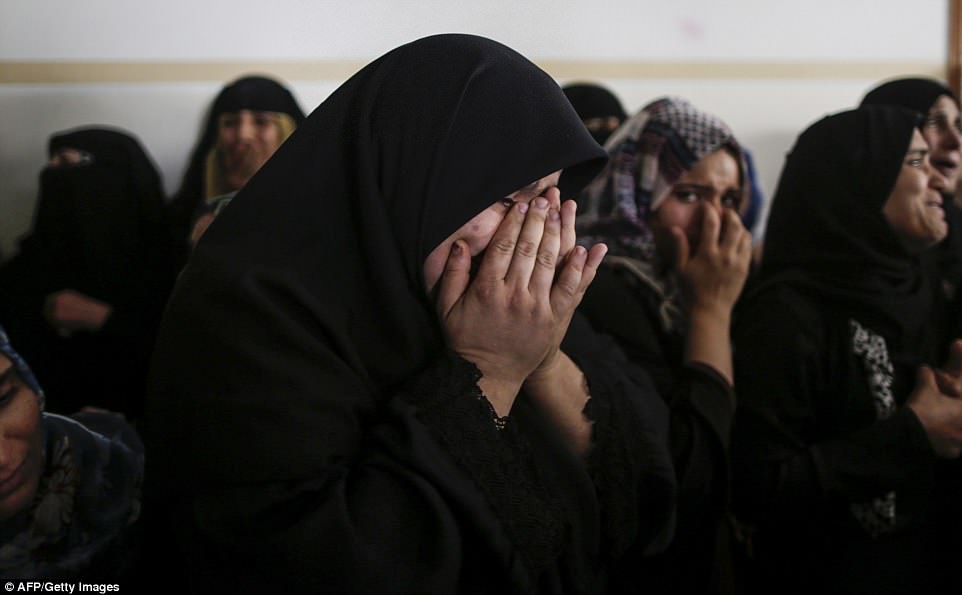 A mourner crying during the funeral. Since March 30, Israeli fire has resulted in the death of 42 Palestinians 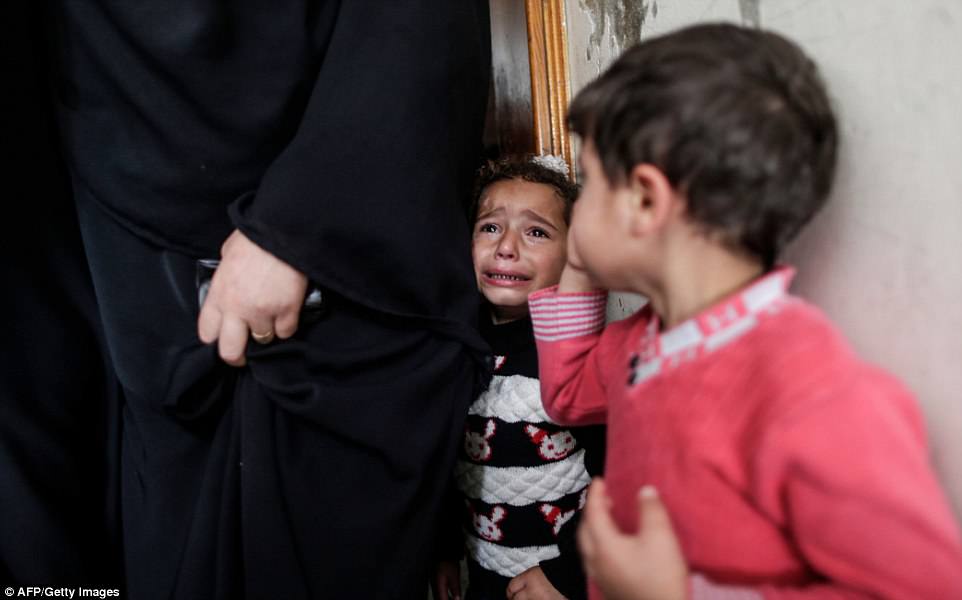 A child crying at the funeral of Azzam Oweida. The Palestinians have accused Israel of using excessive force during the protests 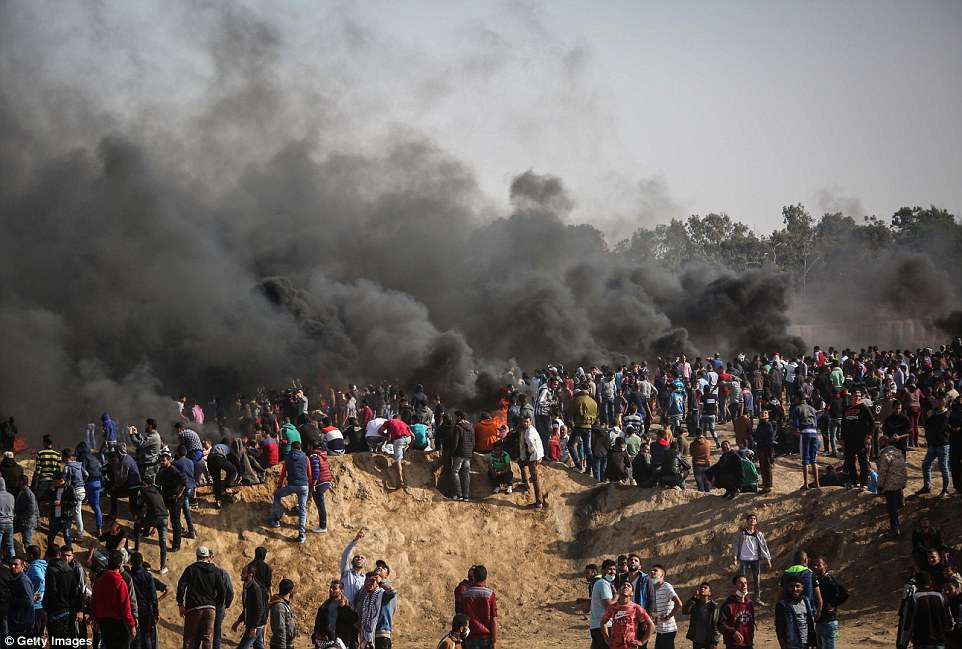 Palestinians set tires on fire  during ‘Great March of Return’ demonstration near Gaza-Israel border at Al Bureij Refugee Camp. Israel says it is defending its border

Palestinians are taking part demonstrations dubbed the ‘Great March of Return’ taking place until May 15 the date Palestinians mark as the ‘Naqba’ or ‘Catastrophe’ and which is also Israel’s independence day.

Hundreds of thousands fled or were driven out of their homes during violence in the 1948-49 war between the newly-created state of Israel and its Arab neighbours.

The protest action is to continue until May 15 when, Hamas leader Ismail Haniyeh says, the Gaza demonstrations will be replicated elsewhere along Israels frontiers.

Israel withdrew its troops and settlers from the territory in 2005 but, citing security concerns, maintains tight control over its land and sea borders.

Egypt also restricts movement in and out of Gaza.

More than two million people are packed into the narrow coastal enclave, where poverty and unemployment rates are high.

The protests come at a time of growing frustration for Palestinians as prospects for an independent state look poor.

U.S.-led peace talks between Israel and the Palestinians broke down in 2014.

Efforts by the Trump administration to revive negotiations have shown no sign of progress.