Four months ago, Tom Troeth made a bold decision to leave Australia and move to the US to pursue his American football dream despite the coronavirus pandemic.

The 18-year-old Geelong quarterback had been a rising star with Gridiron Victoria, but was determined to carve out a path to the NFL, starting with the all-important stepping stone to recruitment: high school football. 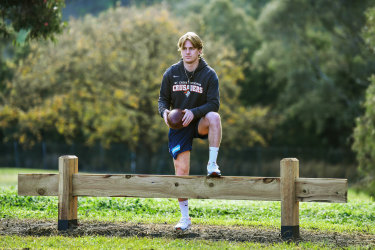 Tom Troeth in Geelong before he flew to America.Credit:Joe Armao

After gaining a government exemption to travel overseas – a process that took a few weeks –Troeth arrived in the Minnesota city of St Paul on July 22. He took up an offer to play gridiron with the St Croix Crusaders while completing his high school studies at the St Croix Lutheran Academy. From there, he could vie for a college scholarship in the hope of eventually being drafted into the national league.

But things didn’t initially go according to plan.

Troeth had only been in the US for a short time when the sport was cancelled across all divisions due to the soaring rates of coronavirus infections.

It was a big deal: after all, the NFL is the most profitable professional sports league in the US, with an estimated total team revenue of about $US15 billion ($20 billion) in 2019. High school and college football is also huge, and in some parts of the country the latter is even more popular than professional football.

Troeth was crushed when he heard the news.

“Everything was going smoothly and then that happened about one month before school started,” he told The Age. “It was a major blow.”

Fortunately, the blow was temporary. After an extensive public outcry from coaches, schools and the President Donald Trump, professional and amateur football is back. Students now train daily after school, with matches every Friday night.

“Football is better than ever. We wear masks when appropriate, but still get the opportunity to play the great game,” says Troeth.

“It’s very interesting observing the contrast between Australia and the US in how the situation is handled. Apart from mask-wearing […] you wouldn’t know there was a virus.”

The past few months have nonetheless been a whirlwind for the young athlete, who left his family in Victoria during the early stages of lockdown and landed in the US during one of the most extraordinary periods in the nation’s history. 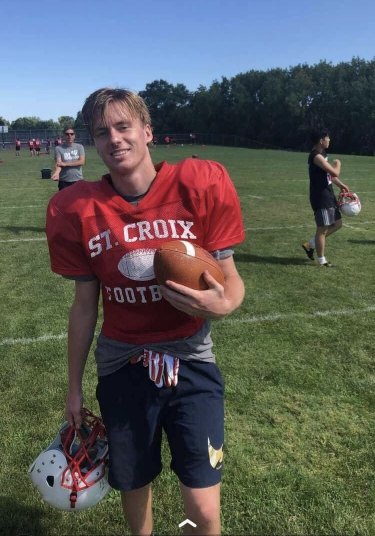 Not only was America fighting coronavirus, it was also facing economic shock, a national reckoning on racial injustice, and a tense election featuring an ever-controversial president.

Troeth admits the US “is a crazy environment to be in at the moment” but adds that the political tensions playing out nationally don’t really surface among his peers.

“The election almost seems like the elephant in the room,” he says. “There is anxiety there but personally it’s out of my hands so whatever happens happens, and hopefully there is peace either way.”

He's also learnt to adapt to 2020’s changing circumstances. When football season was briefly suspended, Troeth and some of his dormitory friends decided to take up soccer as a “substitute” sport.

When school reopened during the pandemic, general students were given the option to do hybrid learning – two days of face-to-face classes; three days online – while dormitory students attended in person under strict guidelines: masks had to be worn, desks were sanitised after use, and social distancing practised where possible.

And despite being far from home, Troeth says he’s loving life abroad. The days are regimented – school starts at 7.45am, finishes at 3.10pm; and there’s no outside recess or lunch time – “but it’s good having a routine to follow.”

But what about the pandemic, which has now reached record levels in the US? At a time when Victoria appears to have eliminated the virus, America is experiencing its worst wave yet, with the death toll passing 250,000 this week and more than 170,000 new cases on Friday alone. Almost 5100 were in Minnesota, which takes in the twin cities of St Paul and Minneapolis.

“Life kind of goes on," he says. "There have been a few COVID scares in school and in the dorm, but my school just copes with it by quarantining people who could have come in contact with the person.

“It would be easy to shut everything down but I think this is the best way to deal with it at the moment. We just have to be careful.”