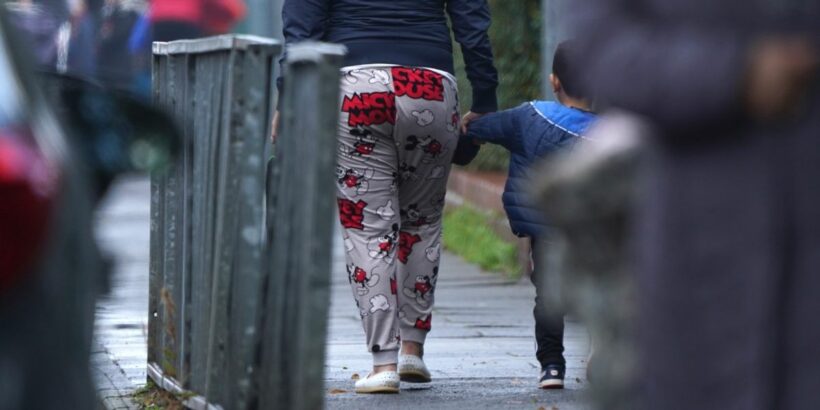 Protesting parents at a school have been caught doing the school run in their pyjamas, just days after the headteacher begged them to smarten up.

The headteacher of Ayresome Primary School in Teeside, Charlotte Haylock, insisted that the "vast majority" of parents supported the school's stance on dress code.

But on Tuesday, one mother was spotted turning up to the school in Mickey Mouse pyjamas, Teeside Live reports.

These images came a day after The Sun appeared to show mum and dads turning up on the school run in their dressing gowns.

However the headteacher said there will not be any consequences for the 'underdressed' parents.

She said: "I hope that all parents follow the advice that I've given.

"But it is a decision they have to make."

Last week, the controversial post from the school went viral as parents and the public were divided in opinion.

It read: "Please can we ask that all parents/carers dress appropriately when dropping off and collecting children from school.

"Dressing gowns on the school yard are not appropriate."

One dad told Teesside Live: "I'm absolutely sick of it. It's not hard to get dressed in the morning."

And in a separate statement, the Executive Headteacher of Ayresome Primary School, said: “We’ve recently seen an increase in the number of parents wearing dressing gowns when dropping off and collecting their children from school.

“This prompted me to issue a polite reminder to parents for them to wear appropriate clothing when accompanying their children to and from school.

“As a school, we encourage our children to be appropriately dressed at all times and we feel it is important for parents to do likewise.

“If parents are concerned about any issue impacting on their child’s schooling, my door is always open if they need to seek advice and support.”

Andy Brown OBE, Chief Executive Officer for Ad Astra Academy Trust, added: “A number of parents and teachers have also expressed concern about some parents wearing nightwear at the school and I wholeheartedly support the stance taken by the headteacher.”