Who is a key worker? Do both parents need to be? Schools and families face confusing battle over who qualifies to keep their children in lessons with 1.7m pupils tipped to turn up at school gates on Monday

Families and schools are split over who qualifies as key workers during the Pandemic Crisis as headteachers urge parents to keep children away from schools.

The Government has published a sweeping list of key workers who are required to keep crucial public services and sectors of Britain’s economy afloat.

Parents who work in one of these critical sectors and cannot keep their child safe at home will be entitled to ‘educational provision’ for their family. 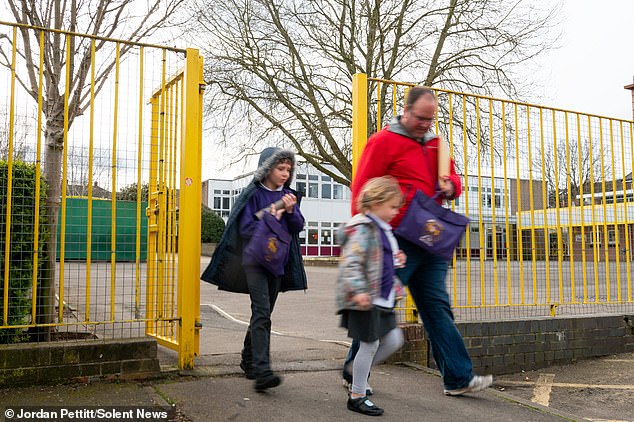 Vulnerable children, such as those with disabilities or on child protection plans, will also attend class, and special schools are trying to remain open.

The Government published a list of workers in ‘critical sectors’, who can send their children into school if they ‘cannot be safely cared for at home’.

Many schools will be closed, with children redirected to others in their local authority area. However, the categories have led to fears the ‘majority’ of pupils might turn up on Monday – with heads forced to turn away children.

The list of ‘key workers’ includes roles in eight categories:

Food and other vital goods –

But the few schools that will stay open are asking if parents should self-identify as key workers, and if they can work from home to look after their children instead.

There is also huge confusion from people who believe they self-identify as key workers about whether or not the scheme only applies to both parents being ‘critical’ – or for just one parent.

The Department of Education told MailOnline the guidance is worded in such as way so as to help parents make informed decisions on whether or not to go into work and keep children at home, or send them back into school – meaning there are no hard-and-fast rules.

A spokesperson said that they cannot legislate for every family and situation.

The Government has come under criticism from concerned headteachers and related unions for including too many sectors in its list, as headteachers fear the system will be open to ‘abuse’.

It comes amid increasing fears that as many as 1.7million children could flock to schools on Monday, while others might remain closed for months.

Education Secretary Gavin Williamson urged workers to look after their own children where possible after the Government’s list was published.

He said: ‘Schools and teachers are on the front line of the fight against coronavirus as they support other critical workers to continue doing vital jobs.

‘I know my admiration for them is shared by all, so we must ask parents, even those who are critical workers but are able to work from home, to look after their child at home – helping schools to focus on those who need it most.

‘If it is at all possible for children to be at home, they should be.’

However, it is not clear how the system will be policed, and which schools will be entirely closed while others remain open as ‘hubs’ for the local community.

A headteacher of a south London primary said: ‘It’s pretty chaotic. It seems like parents will be able to self-identify as a key worker, so it’s wide open to abuse.’

Teaching unions have urged parents to send their children back to school as the ‘last resort’, fearing the ‘majority of pupils’ could turn up next week.

Geoff Barton, of the Association of School and College Leaders, warned: ‘The key worker list is extensive and schools will not be able to cope with the number of children who could potentially arrive on Monday morning.

‘It is important that the public understands that this is not business as usual. The provision in school is likely to be more akin to childcare than a normal timetable. Schools are working to an incredibly tight timescale to turn round this provision, and we would ask everybody to show patience and understanding.’

Paul Whiteman, of school leaders’ union NAHT, said: ‘The Government has made clear that every child who can be cared for at home should be.

‘And the advice makes clear that this applies to children of key workers.’ 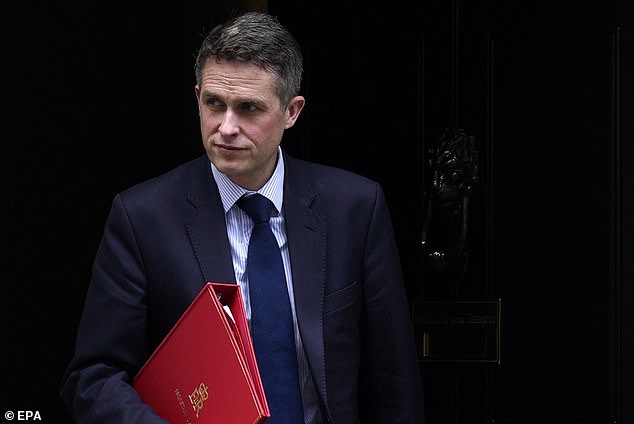 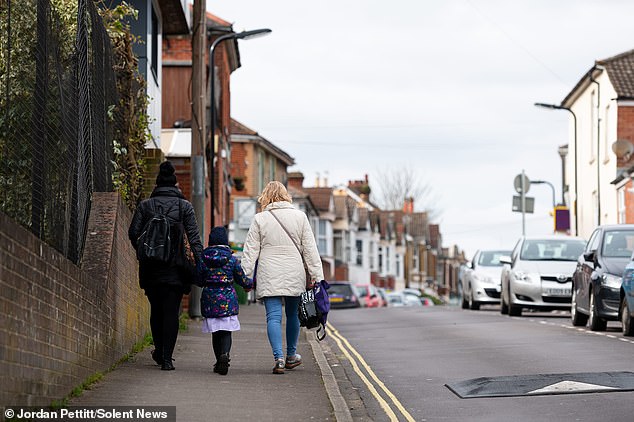 Mr Whiteman urged: ‘Taking up a place during this time is the offer of last resort for key workers who have no alternative.’

Dr Mary Bousted of the National Education Union added ‘the fewer children in educational settings, the lower the risk that the virus can spread’.

She said ‘this is a very long list’ which could result in some schools having the majority of pupils attending, adding: ‘This will not achieve the goal of slowing the spread of the virus. So it is vitally important that parents follow Government advice to keep their children at home wherever possible.’ 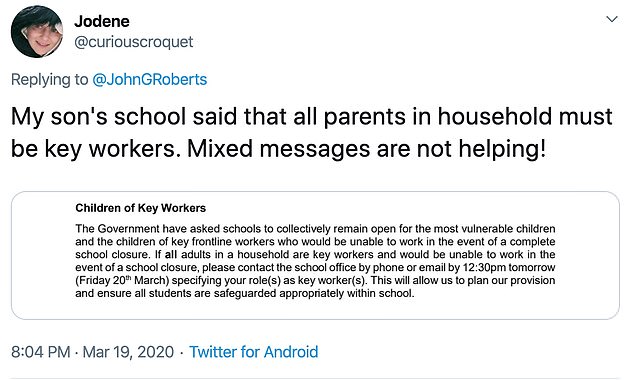