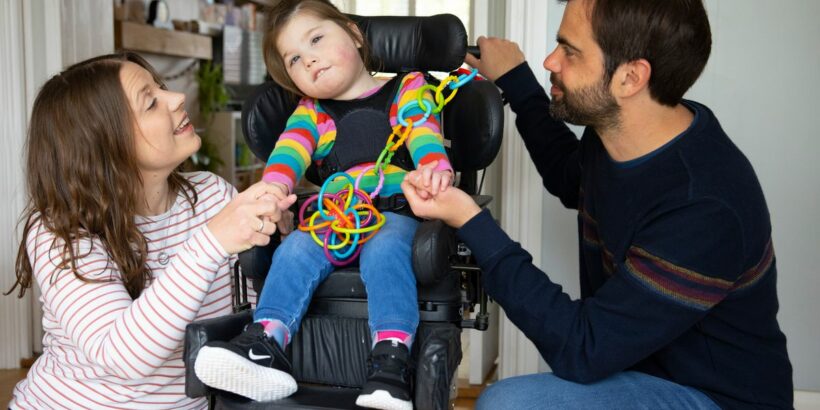 The parents of a severely disabled little girl have revealed their heartache over whether to have another child.

This week we launched our Aurelia’s Adventures campaign to support Aurelia Williamson. The three-year-old suffers from an incredibly rare and devastating condition, which has left her battling a host of disabilities.

As a result of a genetic mutation, brave Aurelia is blind and cannot sit unaided or control her arms or legs.

She stops breathing frequently through the night and is hooked up to an oxygen machine as she sleeps.

She cannot speak, is fed through a tube and has vomited up to 10 times a day in her short life.

Parents Sarah and Trevor have come to terms with the fact she will never see their faces or tell them she loves them.

Aurelia has fought every hardship thrown in her path with a smile on her face. She loves listening to rock music and being bounced up and down as she squeals with joy.

But Sarah and Trevor face one of the most heartbreaking decisions a mum and dad could have to make – whether to have another child.

Sarah, 36, says: “We want to have more children but I struggle with the concept of having a baby born into the life of a young carer, because that’s what we would be doing.

“I would be choosing for my child to be a young carer. I desperately want to give Aurelia a sibling, we know she would love it, but I’m torn between that and wanting another child to live a happy, carefree life.”

Poignantly, the couple also fear dying before Aurelia – knowing she would struggle to cope without them there.

Sarah says: “I can just about handle her being a child, we can protect her and there are services in place for children, but what about when she turns 18?

“She won’t be independent and I worry there won’t be any support for her. We’ll die, or as we get older, we won’t be able to care for her.”

Trevor, 38, adds: “There are two scenarios – she dies first and that’s the worst thing in the world.

“Or we die first, leaving her alone, and that’s the worst thing in the world.”

Aurelia is one of just six people in the world with her condition – VPS4A-related neurodevelopmental disorder.

Sarah and Trevor have been told another child is very unlikely to suffer from the same condition. They have been offered prenatal testing for genetic disorders.

But being Aurelia’s parents is a lonely and difficult existence. They have got used to snatching a few hours’ rest where they can as she ­barely sleeps at night.

Trevor says: “It’s so difficult to have the energy to deal with everything when you get weeks and weeks of not even having four hours sleep. That’s not enough to sustain you.”

Sarah adds: “You get used to not sleeping but sometimes I feel so exhausted. It’s the medical appointments, the equipment, medication, the vomiting – it gets you down. But we just have to keep going – there’s no choice. We do it for her.”

Pandemic aside, they have struggled seeing other families as it’s a cruel reminder of what Aurelia’s life should be.

“I don’t have many ‘mum’ friends,” says Sarah. “It’s hard hearing about what her peers are doing, when she struggles with things they find so easy.

“It’s the little things like toddlers driving you mad constantly saying ‘mumma’ – I’d give ­anything for Aurelia to even ­utter ‘m’ at me.” It’s also hard for the couple, from Manningtree, Essex, to accept the things they planned when having a child will never now happen.

“She doesn’t get to have the life you want her to have,” says Sarah. “You feel it on so many levels – I’m sad for me, I’m sad for her, I’m sad for our family.

While there is no cure for Aurelia’s condition, the family hope to raise £30,000 for physiotherapy, occupational therapy and speech and language sessions in a bid to help her. Sarah says: “When we first met we talked about having children and all the things we’d do and the places we’d go.

“Now we struggle to look ­beyond next week.

“We want Aurelia to experience the things other children do, just in her own unique way.

“Therapy will make a huge difference to her life.”

● Join the Daily Star’s campaign to help change Aurelia’s life – donate via justgiving.com/campaign/aureliasadventures or text Aurelia to 70085 to donate £5. Follow her journey on Facebook – search for Aurelia’s Adventures.