Staff at Victoria’s Parliament House could take industrial action over a pay deal their union says will result in additional work for less pay and insecure work conditions.

The Community and Public Sector Union said Parliament's management were trying to “blackmail” workers to accept a proposal that failed to recognise workers’ efforts to adjust to operating under COVID-19 restrictions. 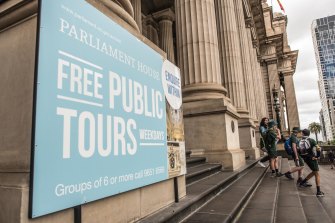 The union is demanding a 2 per cent wage increase for the four years of the deal, consistent with the Andrews government’s cap on bureaucrats' pay, and a 1.25 per cent yearly “mobility” payment that recognises the way they adapted to keep Parliament running during the pandemic.

Parliament bosses, who escalated the dispute to the Fair Work Commission last week, have asked 75 out of 136 members of staff to work additional hours in exchange for the entire workforce receiving the 1.25 per cent lump sum. Parliament leaders believe the deal is fair and requires employees to work the same hours as other public servants.

Public sector union secretary Karen Batt said she would not cave on the three-month negotiation if the current proposal was not improved, and called on Treasurer and Industrial Relations Minister Tim Pallas to step in.

“If it wasn't for the flexibility and goodwill of Parliament staff during the pandemic, we wouldn’t have had those sitting days when we had to deal with [pandemic-induced] changes,” Ms Batt said.

“The fact the Parliament wants to attack their contribution is quite extraordinary.

“They are trying to blackmail the staff and the union by saying we will only offer the government’s lower rate – the 2 per cent. That is bad faith bargaining.”

The union leader said parliamentary staff often did complex work and were required to learn new skills to operate under pandemic restrictions. Workers – including administrative staff, tour guides, librarians, workers who run parliamentary committees and those who write Hansard – had concerns over whether it was safe to attend work when Parliament resumed under strict health protocols during the second lockdown.

The union will consult its workers on Friday over whether to fight or accept the offer. The union may launch industrial action that could disrupt the operation of Parliament when it sits again next year, but Parliament's managers argue the offer is reasonable.

The clerks of the Legislative Council and Legislative Assembly and the secretary of the Department of Parliamentary Services said increasing staff hours from 35 hours in non-sitting weeks and 40 hours in sitting weeks to a flat 38 hours each week would “modernise” the work arrangement.

“We acknowledge these staff will be required to work some additional hours, but believe the salary increases and additional entitlements in our offer adequately compensate them for this change,” they said in a joint statement.

“We believe the offer we have put to the CPSU is very fair, particularly in the current environment. [We] remain hopeful the CPSU and independent bargaining representatives will continue to engage in bargaining and we will be able to reach an agreement.”

Ms Batt said another element of the deal could result in some workers receiving only a few hours’ work per week. She said this could leave workers without a living wage and facing employment insecurity.

Parliament is seeking to introduce maximum-hour contracts for casual staff who facilitate parliamentary broadcasts and perform catering and only work for the approximately 17 weeks when Parliament is in session. Ms Batt said the change would mean workers had no certainty about how many hours they would be rostered to work.

A worker could be offered a 38-hour week or a two-hour week under the arrangement, she said.

“That is counter-intuitive to what the Victorian government is saying is necessary for guaranteed hours and income so they're not looking to work at other sites to make sure they have a proper wage,” she said.

“We’re very concerned at the a time the federal government is moving towards draconian changes to industrial relations that would strip people’s wages, we have the Parliament of Victoria trying to do the same.”

“It could result in hours that do not relate to a proper living wage.