Two of Melbourne's oldest single-sex Catholic schools will merge into one co-educational school next year, although boys will outnumber girls about five to one. 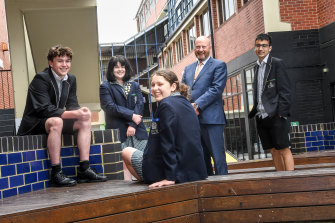 The new school will incorporate both campuses and have about 450 boys and 90 girls.

Presentation College shocked families last year when it announced it would shut at the end of 2020 because of sliding enrolments. Neighbouring CBC St Kilda then invited Presentation students in years 10 and 11 to complete their secondary education there.

While many Presentation students have departed for schools including Sacre Coeur, Star of the Sea, Firbank and Prahran High, some stayed on and will become St Mary’s College students.

CBC principal Terry Blizzard will also lead St Mary’s College. He said the merged school was "in it for the long haul", with hopes of one day having a more even gender mix.

"Our dream is to have a fully functioning two-campus school with equal numbers of girls and boys working together," he said.

But with girls so heavily outnumbered, Mr Blizzard conceded this would not be easy.

"This might take a little while for us to build up numbers. I’m told that’s not unfamiliar when schools go from being single sex to co-ed."

The school’s new governors, Edmund Rice Education Australia, have taken out a five-year lease on the site of Presentation College Windsor and students will use both campuses. Next year, students will wear their respective boys' and girls' uniforms, before a new uniform is phased in over three years.

The two schools already combine for many VCE subjects but will merge in years 7 to 10 for the first time next year.

"I think we need more co-ed, I think that’s what the world is and where we need to be.

"But at the same time, a twinge of sadness that it’s not going on."

She said the roughly five-to-one ratio of boys to girls was "indicative of the fact that Windsor announced more or less overnight that it was closing", but said many newly merged schools had started out with an uneven gender mix before finding a good balance.

"Hopefully the numbers will grow … you’ve got to start somewhere," Ms Burke said.

Media personality Eddie McGuire attended CBC St Kilda in the 1970s and '80s on a scholarship, and said it "opened the world" to him.

That world included dancing lessons and drama classes with the girls of Presentation College Windsor.

He said the merger of the schools "makes sense" and would hopefully give students in inner-Melbourne an opportunity for a good education without the higher fees of neighbouring Catholic schools such as Loreto, St Kevin’s and Xavier.

Julie Sonnemann, acting program director of school education at the Grattan Institute, said single-sex schools "might be a harder sell these days as research showed their academic benefits aren't as big as previously thought".

"Although I suspect that academics is only one small part of the reason why parents send kids to single-sex school, so I’m not sure how much the academic research influences parental decisions," she added.

Education consultant Paul O’Shannassy said the school would probably be successful in the long term because it would be different to the high-fee, single-sex schools nearby.

"This is going to take time but I’m reasonably bullish about it," he said. "They would be unique in their area in terms of co-ed and price and might even attract some non-Catholics."

Mr O’Shannassy, of Regent Consulting, said the COVID-19 pandemic had hit families hard and there was "going to be more of a market for that mid-priced offering".

Presentation opened in 1874 and was the state’s second-oldest Catholic girls' school. Once a prep-to-year-12 school with boarders, it had just 466 students last year. CBC opened in 1878.

Associate Professor Susanne Gannon, who is an expert on gender in education, said the school would need to be gentle and subtle to create a gender inclusiveness for all children.