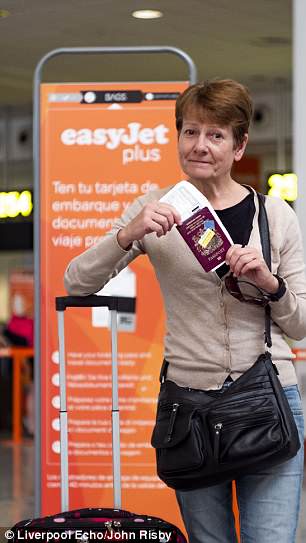 A passenger claims she was unfairly kicked off an easyJet flight – for losing her temper and swearing at an air steward who refused to help her move her bag.

Christine Humphreys boarded a flight from Malaga to Liverpool on Tuesday but the 56-year-old claims she was ordered off the plane after getting in a row with the steward over her hand luggage.

Ironically, given that most incidents of so-called air rage involve alcohol, Ms Humphreys is a director of a company which supplies alcohol-free drinks.

Ms Humphreys, who is originally from Liverpool but lives in Malaga, said: ‘I was one of the last people on the plane and I got to my seat and needed to put my bag in the overhead locker.

‘All of the staff were busy and no one was around to ask so I took my shoes off and stepped on the seat, to put my bag up, because I am five foot nothing.

‘But my bag wouldn’t fit because they were all horizontally positioned. I saw a stewardess and said ”Excuse me, could you help me with my bag?”

‘And she said ”Okay go and move it around then”.’

Ms Humphreys said she explained that she could not reach and asked her ‘Can you not just do it for me?’

‘She said to me ”Don’t speak to me with that attitude”. So I said ”Well I can’t grow six inches” and she said ”I will have to tag it and put it in the hold then”.’ 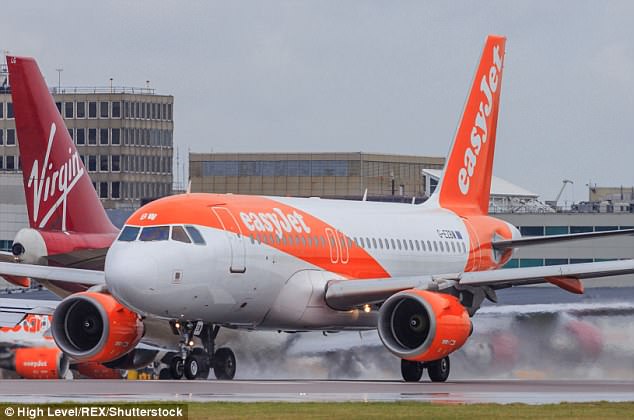 Ms Humphreys, who had to pay £78 for another flight, said the treatment she received from the easyJet flight attendant was ‘insulting’

Ms Humphreys, who said she had no problem with her case being put in the hold, said she went to pass her case to the air steward for it to be taken down.

However, she claims she was told ‘Go take it to the front of the plane yourself’.

Ms Humphreys said she was ordered off the plane ‘to gasps from other passengers’ and the air steward went to speak to the pilot.

She claims the pilot then came out to speak to her and despite Ms Humphreys saying she would apologise, she was told the air steward had said she would not fly with her on board and ‘in the interests of the other passengers she would have to leave’.

She said: ‘The pilot was very apologetic and said he was in a difficult position.

‘I had said to him I would apologise and I know I shouldn’t have sworn at her but her attitude to me was appalling.

‘He said he would try and get me a free replacement flight.

‘When I went back to my seat to collect my things everyone was saying how ridiculous it was that I had been kicked off because they saw how she had acted towards me.’

Ms Humphreys was flying back from Malaga to sort out healthcare for her ill 91-year-old mother and subsequently missed an important appointment.

She claims when she went to the customer service desk to try to get a replacement flight, as requested by the pilot, she was told that due to the airline’s policy and because she had been abusive to staff she did not qualify. 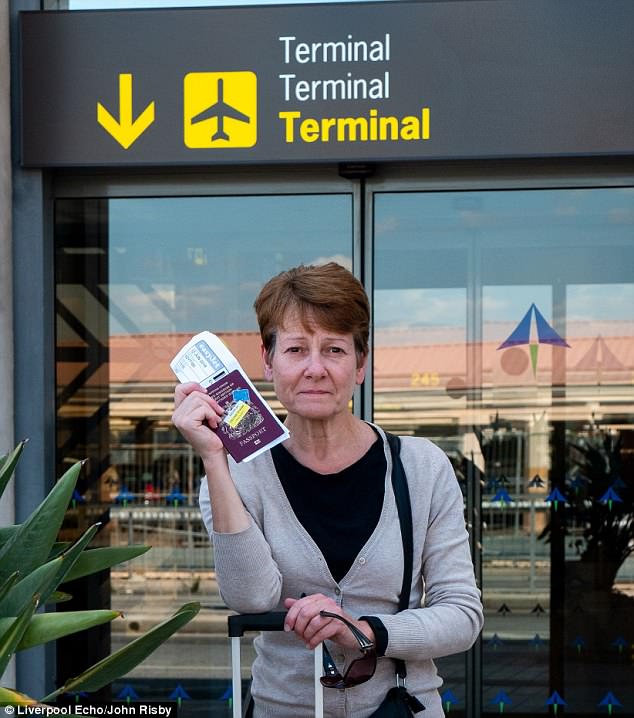 She said: ‘They said it was the first time a pilot had requested a free flight for a passenger who had been kicked off a flight, because it should either be justified or not and if it wasn’t justified I should have been able to fly.’

Ms Humphreys, who had to pay £78 for another flight, said the treatment she received was ‘insulting’.

She said: ‘Their customer service is dreadful. I have had to ask for passenger assistance to make sure I can have help with my bag.

‘So somebody now has to accompany me to the plane all because this air hostess wouldn’t turn one bag around to help me.’

A spokesperson said: ‘easyJet can confirm that a passenger was not permitted to travel on flight EZY7180 from Malaga to Liverpool on 12 June as a result of disruptive behaviour towards the operating crew.

‘Disruptive behaviour will not be tolerated and the safety and well-being of passengers and crew is always easyJet’s highest priority.’