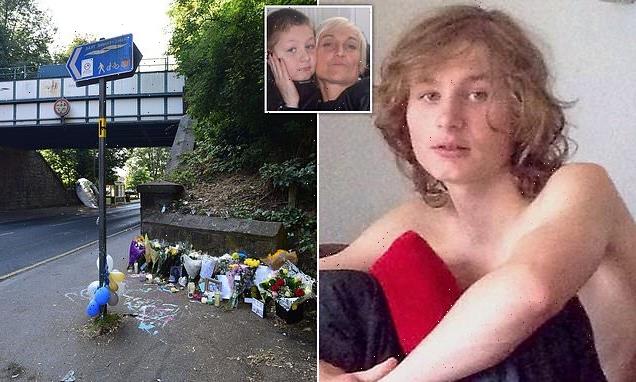 Mother’s horror as she learns that police officer took selfies lying down at scene where her son, 16, had been stabbed to death

A mother of a stabbing victim has spoke of her horror after discovering a police officer took selfies lying down at the spot where her 16-year-old son was killed.

Pc Ryan Connolly took selfies at the scene where Daniel Gee-Jamieson was fatally stabbed in the Liverpool suburb of Gateacre on July, 3, 2018.

Details of the shocking images emerged during a disciplinary hearing which led to Connolly’s sacking from Merseyside Police.

Connolly was tasked with securing the crime scene after Daniel was taken to hospital when he took the photographs. 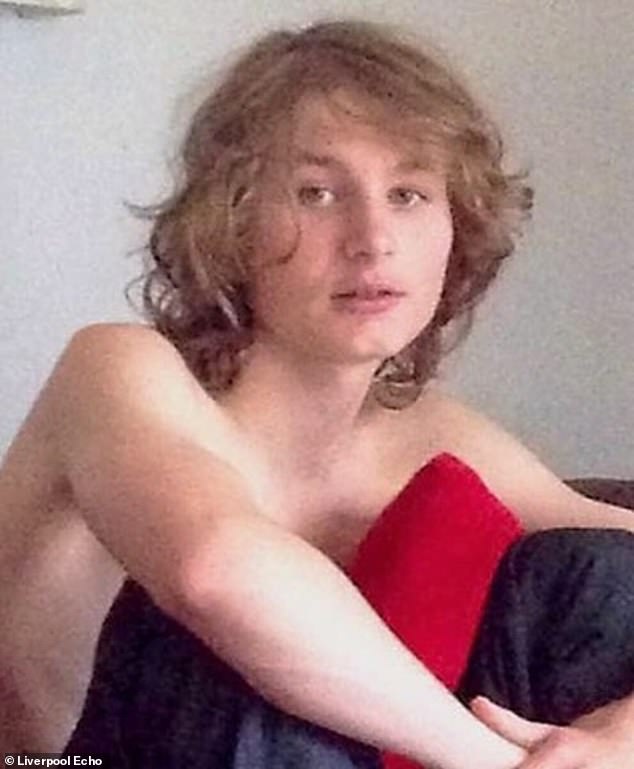 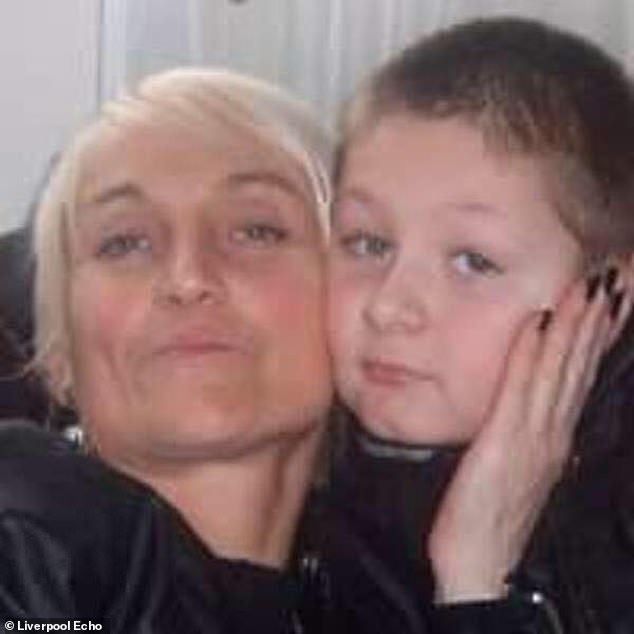 Mandy Jamieson, pictured left, said she held her son Daniel in her arms as he lay dying on the ground at the spot where Connolly later took a selfie 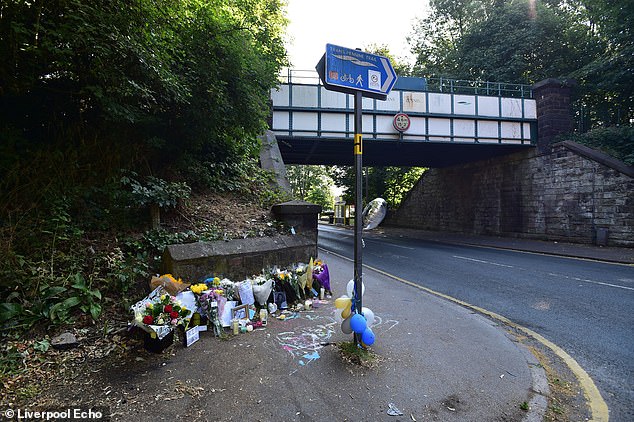 Anti-corruption officers found the selfie at the scene, pictured, after investigating Connolly over several allegations of misconduct

Daniel died in hospital after he was stabbed during the fight. His mother Mandy Jamieson said Connolly took photographs of himself ‘lying down at the scene’.

Connolly was sent to The Nook off Belle Vale Road to help secure the scene after Daniel died from stab wounds.

The photographs of him were discovered after the force confiscated Connolly’s mobile.

Ms said: ‘He took a selfie of himself lying down in the field where my son had died. He had been sent to the scene to help make it secure. He took the photograph on a personal phone which was later confiscated by the force.’

There were distressing scenes as Mrs Jamieson arrived at the park and found her son on the floor covered in blood.

As she lay holding her son in her arms, Daniel said: ‘Mum, I just want to go to sleep.’

He was prounced dead in hospital a short time later.

Daniel was knifed by Owen Cousins, 17, during a supposed ‘straightener’, watched by up to 30 youths.

Cousins was cleared of murder but convicted of manslaughter, after Liverpool Crown Court heard Danny had been bullied by him and his associates.

Cousins was jailed for 11 years. 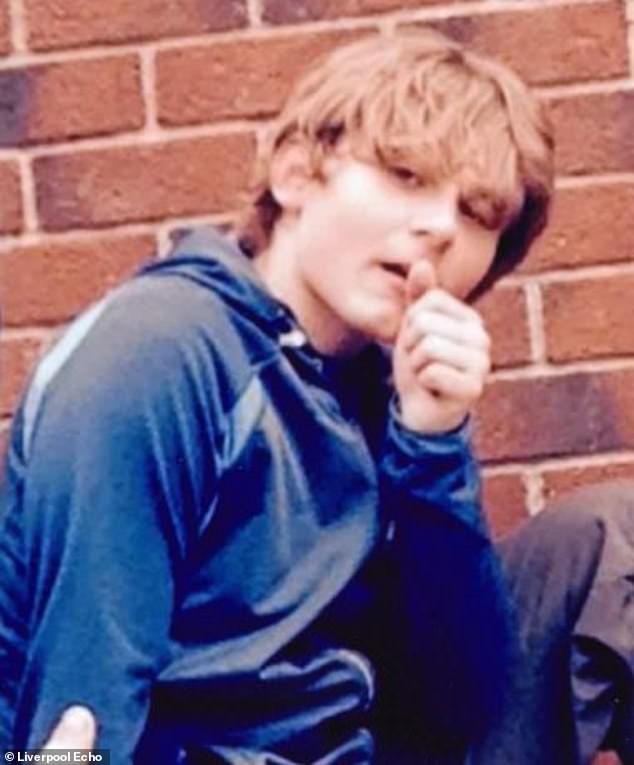 Daniel was knifed by Owen Cousins, 17, during a supposed ‘straightener’, watched by up to 30 youths

Earlier today Merseyside Police released disturbing details of how Connolly had abused his position with the force.

A disciplinary panel found that Connolly had taken pictures of vulnerable people on his personal phone while on duty.

The panel also found that Connolly had stored racist and homophobic images on his personal phone.

Connolly also maintained a relationship with a known criminal and failed to disclose this matter to the force.

DCC Ian Critchley, said: ‘I can confirm that a former police officer has been formally dismissed from post following a gross misconduct hearing.

‘The hearing was called following a robust investigation by our Anti-Corruption Unit, who uncovered evidence that Connolly was failing to uphold the standards and behaviours of officers and staff who work for Merseyside Police.

‘I am appalled by Connolly’s actions, they are beyond comprehension and are not in keeping with the high standards and values that we expect here at Merseyside Police.

‘Our officers carry out exceptionally brave selfless acts every single day, protecting the most vulnerable people in our communities, yet here we see the despicable acts of a very selfish individual who has no place in our Police Service.

‘An investigation by our Anti-Corruption Unit uncovered the fact that Connolly had been using his own phone to take photographs of vulnerable people whilst on duty and that the phone also contained appalling homophobic, racist and offensive images.

‘It also revealed that Connolly was an associate of a known criminal and had not declared this association. His actions are an insult to the uniform and the police service, which consistently strives to protect our communities and provide a professional and inclusive service to the people of Merseyside.

‘The behaviour of this officer is deplorable and serves to undermine the public’s confidence and trust in the police.

‘We are quite clear, if any officer is found to be behaving in a way that does not meet our high standards we will take swift and robust action.

‘Colleagues as well as the public are being proactive in identifying those who have no place in Merseyside Police.

‘We have introduced a number of additional processes within the force to identify those who could bring the force in to disrepute including enhanced vetting processes and we are working with all colleagues to ensure they adhere to our force standards around the acceptable and appropriate use of social media.

‘We are constantly learning and working with our staff networks, our Police Federation and Unions, our Independent Advisory Group and community contacts to continue to recruit from all our diverse communities, to help us identify areas where we can develop our policing approach and community engagement. The Chief Constable is very clear that these are the priorities for our service, for colleagues and the public.We are listening and we are acting as can be seen in this case.

‘The decision today sends out a clear message and shows that Merseyside Police is committed to providing the public with a professional, understanding and inclusive policing service and we will not tolerate any abuse of office.

‘We encourage both the public and our officers and staff to come forward if they witness wrongdoing, and we will act as you have seen in this case, quickly and professionally.

‘The Police Service will not tolerate this type of behaviour. We are rooting out those who have no place in policing. The acts of officers like Connolly seriously undermines the good work going on every day across the force, but I will continue to shout loudly about the professional, empathetic, selfless, brave, inclusive colleagues who everyday put the communities first in everything they do.

‘These acts should never be overshadowed by the acts of someone like Connolly who rightly been criminally convicted and is no longer a part of Merseyside Police, a service and force, that is here to proudly protect and serve our communities.’ 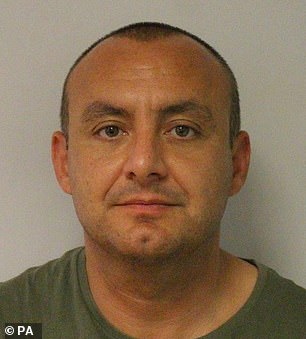 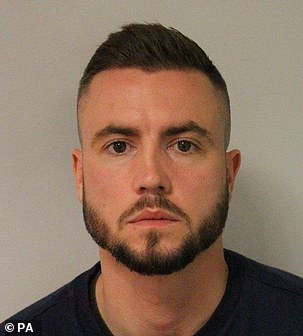 Bibaa Henry and Nicole Smallman taken from Bibaa’s phone. During their trial, Judge Mark Lucraft QC rejected the appeal for the two officers to be spared custody, jailing each of the men for two years and nine months

Connolly’s dismissal follows the conviction of two former Metropolitan Police officers for taking unauthorised photographs of two sisters who were murdered in a north London park in June 2020.

Instead, the officers moved from their posts to take photographs of the bodies, which were then shared with colleagues and friends on WhatsApp.

One was a ‘selfie-style’ image which Lewis had superimposed his face on.

Jaffer, 47, of Hornchurch, east London, and Lewis, 33, from Colchester, Essex, pleaded guilty to misconduct in a public office.

The court heard Jaffer and Lewis, neither of whom was wearing forensic protection, were tasked with protecting the scene after arriving at Fryent Park at 3.30am on June 8 last year.

During the night, Jaffer took four pictures of the bodies in situ and Lewis took two, and superimposed his face on a third to create the ‘selfie-style’ picture.

Jaffer (left), 47, of Hornchurch, east London, and Lewis (right), 33, from Colchester, Essex, pleaded guilty to misconduct in a public office

Jaffer sent an inexperienced female colleague photographs of the bodies as they lay intertwined in the bushes, including Lewis’s ‘selfie’.

He went on to show images to two other officers, including a female probationary officer he was mentoring, who was ‘shocked’ and ‘disgusted’.

Lewis showed an image from the crime scene to another female officer on his phone but she could not see it clearly, the court heard.

Asked by his wife why he was being arrested, Jaffer said it was about a photograph he had taken and ‘nothing done intentionally’.

An examination of the officers’ phones found that images of the bodies had been shared on WhatsApp.

The defendants were members of a group called the ‘A Team’, comprising 41 Metropolitan Police officers.

Jaffer was also a member of a WhatsApp group with nine other close friends who had holidayed together. 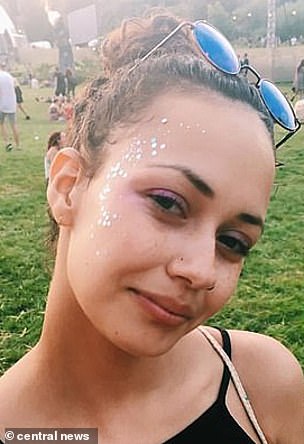 Nicole Smallman, 27, and Bibaa Henry, 46, who were stabbed to death in Wembley last year

Lewis posted to the A Team group an article about the discovery of the bodies, saying he and his colleagues were ‘living the Wembley dream’.

Jaffer posted on his friends’ group: ‘I have pictures of the two dead victims. Let me know who doesn’t want to see.’

Jaffer went on to send a photo of the bodies to three friends, including one who sent it on to his partner.

Lewis sent messages about the case to a third WhatsApp group of seven non-police members.

He told them he was involved in a double murder investigation, wrongly saying the victims were aged 20 and 14 and one was pregnant.

A tribunal found the officers had committed gross misconduct.

Lewis was dismissed from the Metropolitan Police immediately and Jaffer would have been sacked too, had he not already quit the force.

The investigation into Jaffer adn Lewis led ultimately to the sacking of a third police officer, Pc Harry Chandler, who was based in north-east London.

Chandler sent Lewis a message with a racial slur over WhatsApp.