A peer is mounting a bid to block Lord Lester from being suspended from Parliament for pestering a female lobbyist for sex.

Lord Lester of Herne Hill, 82, allegedly promised Jasvinder Sanghera a peerage if she slept with him and chased her around his kitchen in his bid to bed her.

The Lords privileges and conduct committee yesterday recommended that he is suspended from Parliament for four years for sexual harassment.

The decision is being sent to the Lords on Thursday where peers will be given the chance to vote on whether to approve the suspension.

Lord Lester – who was suspended by the Lib Dems during the disciplinary process – strongly denies the allegations against him.

And Lord Pannick, a leading human rights lawyer, slammed the disciplinary process which led to the decision, saying it not worthy of a local darts club.

He is tabling an amendment calling for the matter to be sent back to the Privileges Committee, claiming the procedure adopted by The Commissioner was unfair. 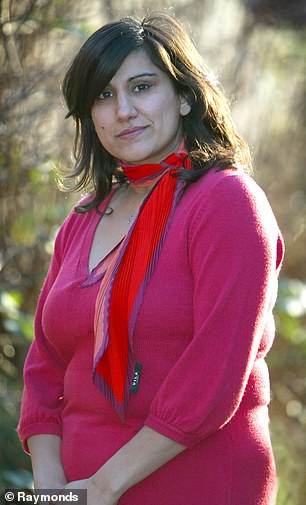 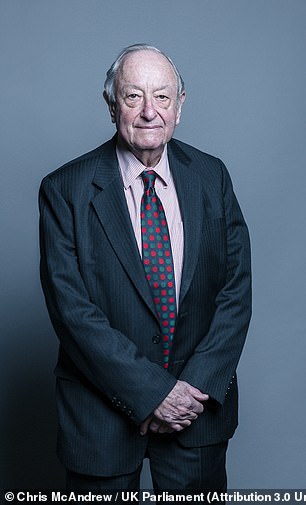 Jasvinder Sanghera, 53, claimed that in the car journey Lord Lester of Herne Hill repeatedly grabbed her thigh instead of the gearstick, leaving her so concerned for her safety she later barricaded herself inside his guest bedroom using a chair 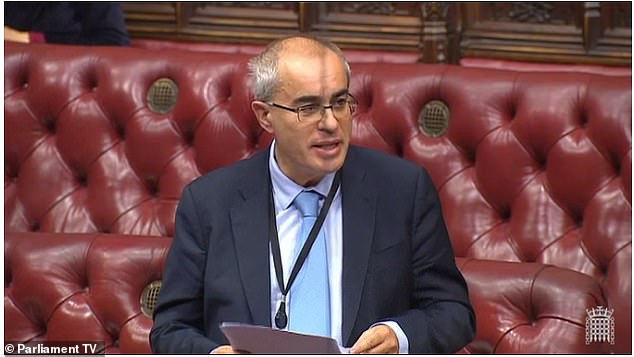 Lord Pannick (pictured in Parliament earlier this year) said the disciplinary process against Lord Lester was unfair because the peer was not allowed to cross examine the woman who made the complaint against him. He is mounting a parliamentary bid to block the suspension

He accused the Commissioner of breaching the code of conduct which requires her to ‘act in accordance with the principles of natural justice and fairness’.

If his amendment is voted through, then Lord Lester would be able carry on sitting as a peer and claim his £300 tax free daily allowance.

Lord Pannick QC, a crossbench peer and a close friend and colleague of Lord Lester, said: ‘The procedure followed by the Commissioner was manifestly unfair.

‘It is impossible fairly and effectively to decide on the truth of allegations of sexual harassment said to have occurred nearly 12 years ago without allowing for the cross-examination of the complainant.

Dame Laura Cox said many MPs will be ‘horrified’ at the conduct of their colleagues.

Some male politicians were guilty of ‘predatory’ behaviour, the judge said.

Women who worked in Westminster complained that male MPs had touched their bottoms and breasts, patted their heads and had been abused in ‘vulgar gender-related terms’.

Dame Laura said: ‘The most serious allegations related to the alleged ‘predatory’ conduct of a few individuals, but overall the allegations indicate that sexual harassment has been a more widespread problem, and it crosses the political sphere.

‘All of the allegations were made against men. Some are no longer in the House but others continue to serve as elected Members.’

Some male MPs were so well known for their lewd advances that women were privately warned never to be in a room alone with them, the report said.

She added: ‘There were reports too of groups of male MPs becoming increasingly boorish on occasions when they were together, of frequent sexual innuendos, lewd comments or sexual gestures, or women repeatedly being asked questions about their sex lives, or about their personal lives generally, which they found offensive and humiliating.’

Dame Laura added: ‘Some men who came forward spoke of witnessing ‘some atrocious treatment of young women by MPs,’ and of ‘some women being treated as their personal servants, with veiled threats to have them moved if they failed to comply with requests.’

He added: ‘Parliament has applied a procedure that would be invalidated by the courts if Lord Lester were to be suspended by his local darts club.’

Lord Lester is said to have sexually harassed Ms Sanghera, 53, a campaigner against forced marriage, when the pair worked together on a Bill going through Parliament in 2006, when he was 70 and she was 41 years-old.

He allegedly repeatedly grabbed Ms Sanghera’s thigh instead of the gearstick of his car and allegedly told her: ‘If you sleep with me, I will make you a baroness within a year.’

He allegedly became ‘obsessively attracted’ to the woman three decades his junior, repeatedly pestering her for sex.

After one late meeting she agreed to stay with him and his wife at their £3million home after she missed her train – but became so concerned for her safety she barricaded herself inside his guest bedroom using a chair.

Describing what happened the next morning she told the Commissioner for Standards: ‘He came up behind me and put his arms around my waist.

‘I pushed him away. Again, he placed his arms around me and further up my body. I had to force myself away. He pursued me around the kitchen and I pleaded with him to stop’.

She added in her statement: ‘In the car on the way to his house, he kept repeatedly missing the gearstick with his hand and instead very firmly placed his hand on my right thigh.

‘The first time it happened I thought it must’ve been an accident, but when it continued I realised it was not. I removed his hand and asked him to stop. He just smiled.

‘He continued to grope my thigh for the length of the journey, despite my protests’.

Yesterday Lord Lester, who called the allegations a ‘pack of lies’, was warned he faces a record suspension from the House of Lords for the sexual harassment and could be barred from the upper chamber until June 2022 for breaching its behaviour code.

If approved by peers, it will be the longest suspension from Parliament in modern times.

Lord Lester rejected the allegations as ‘completely untrue’ and denounced the investigation – conducted by the Lords’ Commissioner for Standards, Lucy Scott-Moncrieff – as flawed.

Miss Sanghera, who has a partner and adult children, made claims about Lord Lester last November following the Westminster sex harassment scandal. 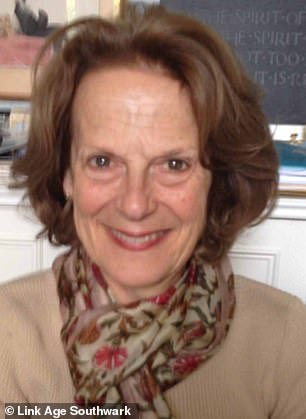 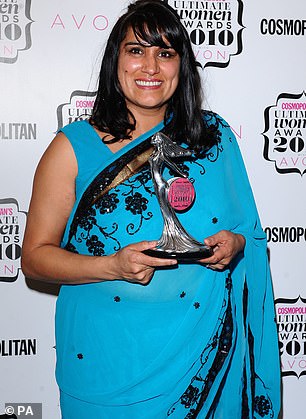 Waiving her anonymity, she told The Times that she did not make a complaint at the time because she thought her word against his was ‘not an equal contest’.

She said: ‘What he did to me wasn’t acceptable and wasn’t honourable. There needs to be a system in place that will give other victims the confidence to complain and to feel supported in doing so’.

Lord Lester dismissed the allegations as a ‘pack of lies’ and said Miss Sanghera later signed a book for the peer thanking him for his ‘love and support’.

A report by the Lords’ sub-committee on conduct said the peer became ‘obsessively attracted’ to Miss Sanghera to the extent that he ‘completely lost all sense of judgment and propriety’.

Lord Lester was a special adviser to Roy Jenkins in the 1970s and moved with him from Labour to help found the Social Democratic Party in 1981.

Lord Lester has claimed £9,485 in expenses since the accusations were levelled at him, the Daily Mirror reported.

‘He put his arms around me … I felt violated’ 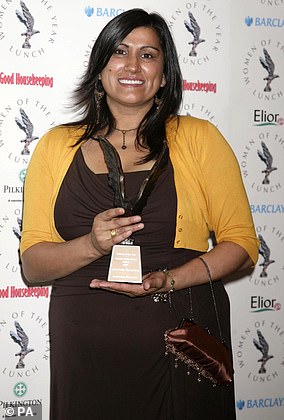 In her statement to the Commissioner for Standards, Jasvinder Sanghera (pictured right) said:

I attended a meeting followed by a meal in the House of Lords with a number of others including NGOs and Lord Lester. By the end of the meeting I had missed my intended train. I could have caught a later train but this would have meant arriving home sometime in the early hours of the following morning. Lord Lester suggested that I stay at his home in London. I initially said no as I did not wish to impose on his hospitality, but he insisted and said he would call his wife. Shortly after this he said he had telephoned his wife who is looking forward to meeting me, that his wife was at home and that she worked in an area that related to my work, and would love to meet me. I had no reason to be concerned about staying overnight, especially with his wife present and had by that time been working with him for a few months, and so I accepted his invitation.

In the car on the way to his house, he kept repeatedly missing the gearstick with his hand and instead very firmly placed his hand on my right thigh. The first time it happened I thought it must’ve been an accident, but when it continued I realised it was not. I removed his hand and asked him to stop. He just smiled. I felt incredibly uncomfortable knowing that I was on the way to staying at his house. He continued to grope my thigh for the length of the journey, despite my protests.

When we arrived at his house, we were greeted by his wife who had made tea for us. We chatted, and his wife told me she would bring me a cup of tea to my room in the morning. Lord Lester then said he would show me to my bedroom for the night. Once we had reached where I would be sleeping, he said it was not far from his bedroom, which he insisted on pointing out to me, saying he would not be far from me. This made me feel very uncomfortable, as his remarks and his earlier behaviour made me feel that he had other intentions notwithstanding my unequivocal rejection of his advances.

I went into my bedroom and immediately placed the chair under the door; I felt afraid, recalling what had happened in the car. I immediately called T, who had been a friend for many years. I was in the bedroom at this time and I told her what had happened and I felt trapped in his house. She advised me that I put the chair under the handle of the door, which I had placed as I feared Lord Lester might come into my room in the night and she suggested I leave first thing in the morning. I scarcely slept all night, sleeping fully clothed.

I removed the chair in the early hours of the morning as I knew his wife will be coming to bring me a cup of tea. This she did, and I then got ready and came down to leave for home.

By this time, his wife had left, it was only Lord Lester in the house and I went into the kitchen. I went over to place the crockery in the sink. It was then that he came up behind me and put his arms around my waist. I pushed him away. Again, he placed his arms around me and further up my body. I had to force myself away. He pursued me around the kitchen and I pleaded with him to stop. Once he stopped, I told him that I wished to leave. I wanted to call a cab, but he insisted that he went with me. I allowed him to, as I just wanted to get out of the house.

Once we got to the train station, he told me that he had strong feelings for me. I responded by saying I did not feel the same way. I said that he should know better as he had a wife. I made it very clear that I did not feel the same way and did not want to be involved with him in any way other than professionally. He persisted and told me that he loved me and said he could not help himself. I was relieved to get my train home, feeling uncomfortable and violated by this behaviour.