A pensioner who was scammed out of £20,000 has received a letter from his bank advising him that they had recovered just over £5.

John Sutherington, 69, of Anstey, Leicestershire, was devastated after he handed over his bank details to callers claiming to work for Virgin Media and Santander.

The Liberal Democrat borough councillor suffers from severe aplastic anaemia and is receiving treatment after having a bone marrow transfusion. 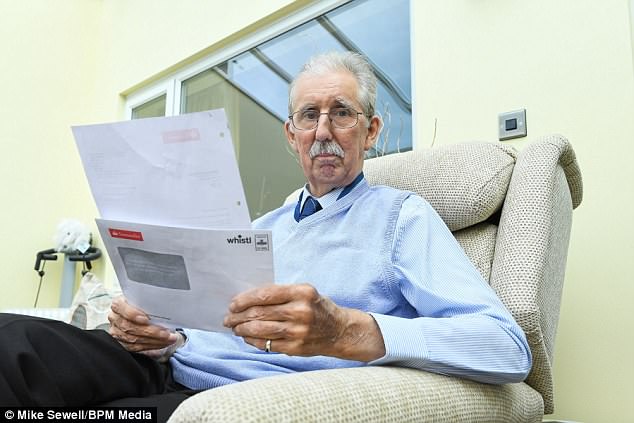 John Sutherington, 69, of Anstey, Leicestershire, was devastated after he handed over his bank details to callers claiming to work for Virgin Media and Santander

He was therefore hoping for some rare good news – but was told by Santander officials that they have clawed back just £5.14 and returned it to his account.

Mr Sutherington said: ‘I actually laughed out loud when I saw it. I thought “Is that it then? That’s great. Now any chance of getting back the other £19,994.86?”

‘To be honest I wish I’d never had the letter and didn’t know. It’s a bit of a joke and it rubs salt in the wound. I don’t understand why.

‘If they know where that £5.14 has gone to why they can’t get more or all of it back? To be honest the stress of it all hasn’t done my health much good.

How to spot fraud before it’s too late

The Take Five campaign has provided some tips and advice to help spot fraudulent messages.

‘It’s taken a bit of a downturn. I’m going to keep on at them to find the rest of the money but I’m not optimistic.’

The letter Mr Sutherington received from Santander was signed off ‘here to help’, but the bank have now given him an extra £200 as a gesture of goodwill.

Speaking last month, grandfather Mr Sutherington told how he received a call in the morning from someone claiming to be ‘Jason Ry’ from Virgin Media.

‘Normally I’d just put the phone down but I had actually been thinking about trying to get my Virgin Media bill down as it was quite dear,’ he said.

‘His timing was perfect. I actually thought I’d been lucky. He said he could offer me a deal for pensioners on a fixed income.

‘I did exactly what I know I should not have done – I gave him my sort code and account number so he could change my direct debit.’

He later had a call from a ‘Michael Earl’ who claimed to be from Santander and told him his account had been hijacked.

‘I said I couldn’t get down to the bank because of my poor health. This Michael said he would help me change my bank account,’ said Mr Sutherington. 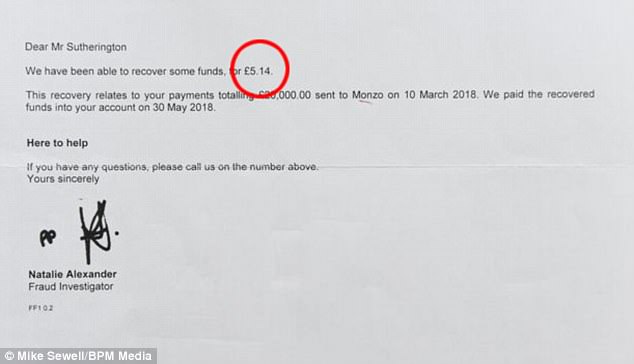 Mr Sutherington was hoping for some rare good news – but was told by Santander officials that they have clawed back just £5.14 and returned it to his account

‘A new account was set up and a significant amount of my money was transferred into it – only it wasn’t my account, it was the fraudster’s.

‘When I realised what had happened what a prat I felt – and still do. I can just picture the guy sitting at a desk watching my money enter his account and thinking “I’ve got another silly old fool”.’

What should you do if you think you have been scammed?

1. Contact the company or person who took your money – this could be fruitless if it’s a scam, but it should be your first port of call.

2. If you bought something costing £100 or more on a credit card, you may be able to claim it back under a little-known law: Section 75. Once you’ve paid using a credit card, the card provider and retailer are locked into a legally binding contract, so if the retailer can’t or won’t refund you, you can raise the dispute with your card provider.

3. If you can’t claim the money back via Section 75 you could try using the chargeback scheme. It’s a voluntary agreement by your debit or charge card provider to stand in your corner if anything goes wrong.

4. Unfortunately, if you’ve transferred the money using sites such as Moneygram, Western Union or PayPal, you generally can’t get your money back once you’ve handed it over.

Mr Sutherington reported the fraud to the police, Santander and Virgin Media. But the criminals have still not been tracked down.

‘This should be a warning to all,’ said Mr Sutherington. ‘Never give out details like I did however persuasive a caller is. If it sounds too good to be true, it probably is.’

A Santander spokesman said: ‘Whenever fraud occurs on an account, Santander will contact the bank where the money has been sent, as quickly as possible to attempt to hold funds before they are moved on.

‘In Mr Sutherington’s case we did this and £5.14 was remaining. However in investigating this case we identified that we could have identified the fraud during a telephone call with Mr Sutherland on March 10.

‘If we had done so, we’d have been able to prevent an addition £2,021.07 from being defrauded from Mr Sutherington.

‘We have returned this amount – and provided an additional £200 as a gesture of good will.’

‘Virgin Media will never call our customers and ask for their bank details – if any customers receive these calls we urge them to not give any details, disconnect the call and report the incident to Action Fraud.’