People smugglers have opened a new Balkan route for those fleeing conflict or poverty in the Middle East, North Africa and Asia – with increasing numbers of migrants trying to reach western Europe through Albania.

Migrants gathered outside the Asylum Seekers Centre in the Albanian capital of Tirana spoke of how they wanted to find work in a variety of European Union countries, dodging police on the way there.

The flow of migrants heading for EU member Croatia across Albania and its northern neighbour Montenegro remains modest compared with the hundreds of thousands who took a route further to the east when the European migration crisis peaked in 2015.

But the rate of increase this year is rapid.

Officials say Albanian authorities caught 2,311 migrants in the first five months, up from just 162 between January and May 2017 and more than double the figure of about 1,000 for the whole of last year. 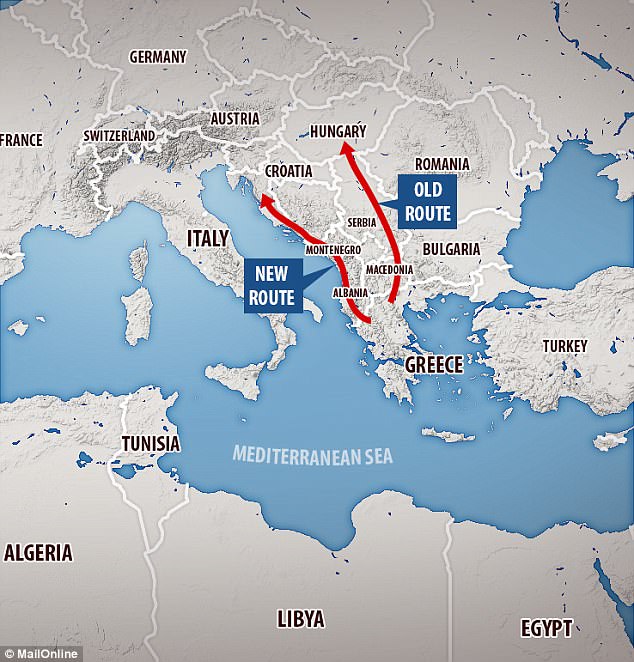 People smugglers have opened a new Balkan route for migrants through Albania. During the 2015 crisis, migrants tried to travel from Greece through Macedonia and Serbia to EU member Hungary, until this route was sealed by border guards and fences 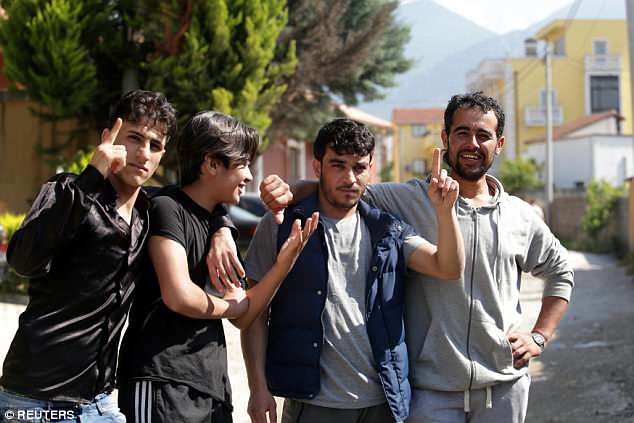 Syrian migrants are pictured in front of the National Reception Center For Asylum Seekers in Tirana, Albania

During the 2015 crisis, migrants tried to travel from Greece through Macedonia and Serbia to EU member Hungary, until this route was sealed by border guards and fences.

With warmer weather encouraging travel from the overcrowded Greek camps, the government feels it has controlled the flow so far.

However, impoverished Albania appealed last month to Austria – where the right-wing government is cracking down on migration – for help.

Security and police officials from the region met in Bosnia this week to discuss their response to growing traffic along the new route.

More than 5,500 refugees and migrants have entered Bosnia this year.

Albanian police said they have arrested a handful of people smugglers this year ferrying migrants in taxis or vans. This included two Algerians near the Montenegrin border this week. 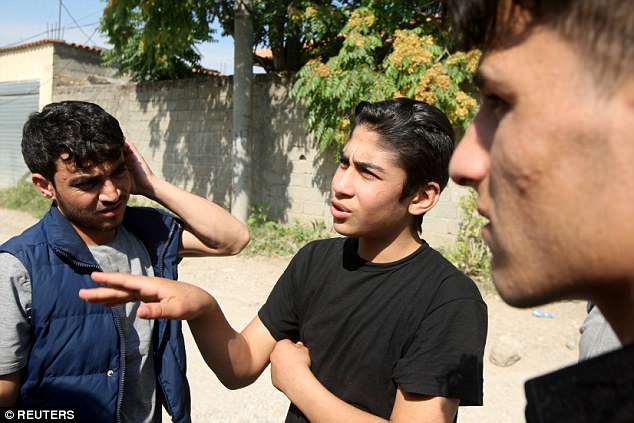 Syrian Faisal Grdawe (centre), from Homs city, said he had not seen his family for a year and reached Greece from Turkey, hoping to travel on to Malta or Italy

The government wants aid to increase patrols on the Greek border and has welcomed a decision by the European border agency Frontex to send officers to fight crime and curb migration.

While the route is new, the migrants’ experiences are familiar.

Syrian Faisal Grdawe, from Homs city, said he had not seen his family for a year and reached Greece from Turkey, hoping to travel on to Malta or Italy.

‘We have friends and family there and they said it is good. So we want to go to Malta,’ Grdawe, 18, said. 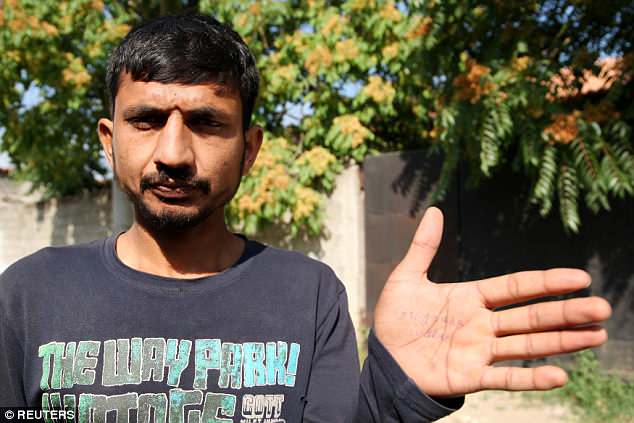 Saddam Husse from Pakistan shows the name of his city ‘Gujranwala’ on his hand in front of the National Reception Center For Asylum Seekers in Tirana, Albania

Grdawe and three friends had been part of a group of 30 that left Syria.

One of his friends, who gave his name as Mahir, said their stay in the asylum seekers’ centre was not the freedom they sought, adding that the ‘food here is worse than in a jail in Syria’.

Moroccan, Algerian and Pakistani migrants said they followed advice from friends who had crossed earlier: ‘Go to Italy because you get ID papers there’ and ‘Be careful of Croatian police, they beat you up badly.’

Croatian police say they are acting within the law, and protecting the borders.

Interior minister Davor Boznovic said more than 144 people have been detained for people smuggling this year. 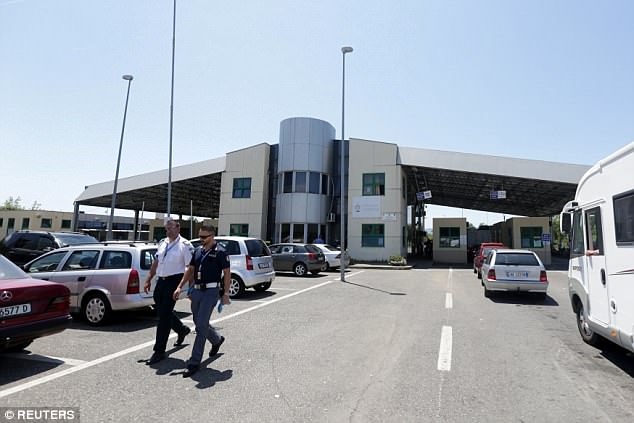 The European Border and Coast Guard Agency known as FRONTEX police patrol the area near Albania-Montenegro Crosspoint in Shkodra, Albania 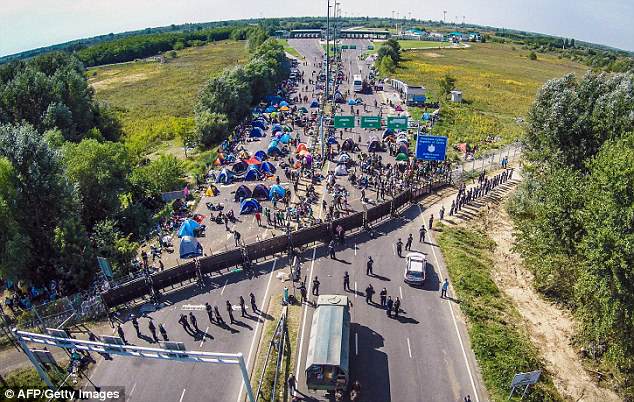 An aerial view taken on September 16, 2015 shows migrants camping on no-man’s land at the border between Hungary and Serbia near Roeszke. Hungarian police used tear gas and water cannon against migrants to push them from Hungary’s territory

The route north is difficult.

‘I have come from Turkey, then from Greece and tried to go to Montenegro. Police caught me twice,’ Hichem Boussadia, 29, said at the Border Police Station in Shkoder near the Montenegrin frontier.

Austrian Chancellor Sebastian Kurz and Albanian Prime Minister Edi Rama agreed at the end of May that they should ‘deal with the problem now before it grew bigger like it did in 2015 and 2017’, with Kurz offering financial aid for Tirana.

By Mario Ledwith for the Daily Mail

Failed asylum seekers will be sent to bleak holding camps outside Europe, under plans drawn up by EU leaders to prevent another migration crisis.

Austria and Denmark believe that the hard-line approach is needed to stop economic migrants from making perilous journeys to Europe in huge numbers.

With EU talks on a migration strategy plagued by in-fighting, leaders in the two countries are pushing ahead with their own plan to set up camps outside the Brussels framework.

Danish Prime Minister Lars Rasmussen said the location should be somewhere ‘not particularly attractive’ in order to prevent migrants from travelling to Europe.

The move is an attempt to stop those who are not entitled to refugee protection from ‘asylum shopping’ – the phenomenon in which migrants apply for protection in several EU countries. 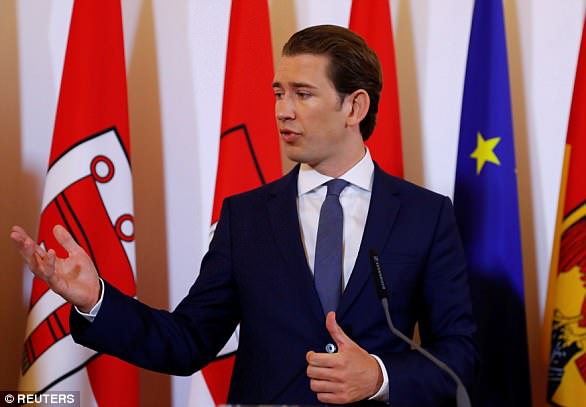 Mr Rasmussen said: ‘It [the camp] would be in a country that isn’t on the migrants’ or the human traffickers’ list of preferred destinations.

‘Based on my discussions with other European leaders — and the dialogue that is going on at official level — it is my expectation that we will be able to take the first step this year.’

A country for the pilot project has yet to be determined, but officials said that the initial plan could involve a deal being struck with a state in the West Balkans, such as Albania or Macedonia.

Sebastian Kurz, Austria’s anti-immigration Chancellor, said: ‘People travelling to Europe illegally cross through several countries and pick their favourite one to lodge their asylum claim. It shouldn’t be like that.

‘We suggested a long time ago that it would make sense to offer protection outside of the European Union, where [migrants] get protection where it is necessary but do not have the opportunity to pick the best system in Europe.’

Mr Kurz, 31, has made overhauling the bloc’s approach to immigration a priority issue, with Vienna is set to take over the EU’s influential revolving presidency next month.

Addressing the plans to create a camp, he added: ‘It’s a national project we share with Denmark and other member states.’ 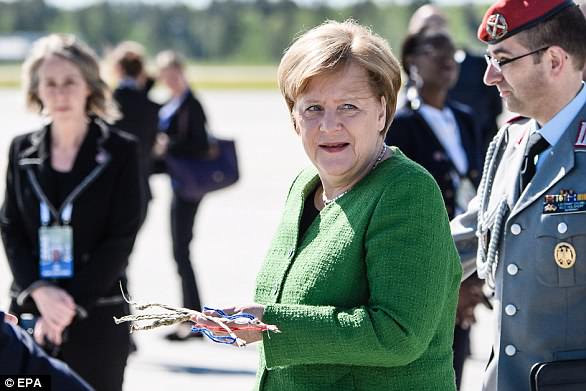 Both Holland and Germany were said to have been interested in the plan initially, but are now not taking part in discussions.

Mr Kurz outlined the broader immigration approach to Jean-Claude Juncker during a meeting in Brussels on Wednesday, in which the Brussels chief also tentatively backed the camp plan.

Mr Juncker said: ‘I believe the defense against illegal immigration is a European as well as national matter. It is not up to me to be against it.’

But officials will want to see its details to make sure the plan is in line with EU asylum laws.

A European Commission spokesman said: ‘We can’t speculate on whether it’s legal or not without knowing the details.’

The provisional plan would target asylum seekers who are refused protection but can currently remain in a country for years as potential deportation is arranged.

An EU diplomat last night described the proposition as ‘magical thinking’ and said it would require changes to EU asylum rules, even if the countries tried to circumnavigate EU rules.

It comes as EU countries are locked in a furious row over how to change the bloc’s regulations on asylum.

Angela Merkel warned the EU’s future will be placed in jeopardy if countries do not solve the deepening row.

‘I can be very frank and open and say that if we are unable to come up with a common response to migration challenges the very foundations of the EU will be at stake,’ the German Chancellor said.

She insisted that ‘action is really needed’ if the bloc wants to prevent a repeat of the 2015 migration crisis, adding that freedom of movement rules would come under intense scrutiny.

The fight has been fuelled by warnings from Italy’s new government that it will break away from the Brussels rulebook if it continues to be ‘abandoned’.

Its leaders are angry that other EU member states have reneged on promises to rehome some of the 600,000 migrants who have arrived there from Africa in recent years.

The plan is fiercely opposed by Hungary and Poland and has opened up an east-west split, but frontline Mediterranean countries have insisted on reforms.

The UK is exempt from the scheme.

Brussels proposals to change the rules after two years of talks were branded ‘dead’ earlier this week, with EU leaders poised to hold crunch talks at a summit later this month.

Denmark is not a top priority destination for migrants, with just over 1,000 arrivals in the first four months of this year, from a peak of more than 21,000 in 2015.