People with disabilities are being left out of decisions about their lives, with the agency that runs the National Disability Insurance Scheme admitting it has relied too much on others to make decisions on people’s behalf.

A paper released by the National Disability Insurance Agency says there is a long history of people with disabilities not being supported or enabled to make decisions for themselves. 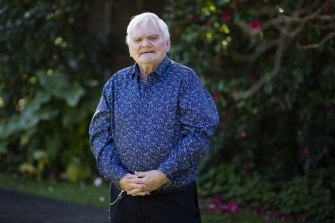 Colin Hiscoe from Reinforce Self Advocacy wants all information about the NDIS to be provided in plain English.Credit:Paul Jeffers

The NDIS Act 2013 recognises that decision-making is a human right for people with disabilities.

However, the agency said the current environment is often weighted towards substitute decision-making, where someone such as a nominee or guardian has authority to make decisions on behalf of an adult with a disability.

The agency says nominees are being appointed when they might not be necessary.

About 60 per cent of adult NDIS participants have a disability that means they might require some support to make decisions. However, the paper says there is not much information or support for parents, carers and professionals to help them make these decisions.

“Because of this, people with cognitive impairment are often left out of decisions about their lives,” the paper says.

The agency says there can be a conflict of interest between the disability service provider and the wishes of the person with a disability.

It says, for example, some residents in group homes are not included in decisions – such as weekly menus, meals and activities – that could interrupt the house routine.

The paper also says young people turning 18 are not well supported to move to independently engaging with the NDIS, which means many parents continue to act as representatives, sometimes without consent.

Colin Hiscoe is a volunteer and former president of Reinforce Self Advocacy, an organisation run by and for people with intellectual disabilities to help them speak up for themselves. He said all information about the NDIS must be provided in plain English, using language that is clear, short and easy to understand.

“There is too much jargon and not enough pictures,” Mr Hiscoe said. “Please try and make things as simple as you possibly can.”

Mr Hiscoe also said National Disability Insurance Agency staff should focus on the person with a disability in interviews, rather than their support co-ordinator, advocate, family member or carer.

The agency is seeking feedback on a new policy to ensure NDIS participants play a bigger role.

“At the moment people in group homes frequently don’t get to choose who they live with,” she said. “If a spot becomes open in a house, the service provider or family usually decides who comes and lives there.”

“People with Down syndrome are often not supported to be involved in their own decision-making,” said Dr Ellen Skladzien, chief executive of Down Syndrome Australia.

“This is a step forward in ensuring that people with a disability get a say.”

Sarah Forbes, an advocacy manager at the Victorian Advocacy League for Individuals with Disability, said getting supported decision-making right was the most critical element of the NDIS, but she was concerned there would not be funding to implement it.