Phnom Penh: The trial of Australian filmmaker and accused spy James Ricketson has taken a political turn, with Cambodian judges grilling him over his criticism of strongman Prime Minister Hun Sen.

Ricketson, 69, faces 10 years in prison if convicted of espionage, after he was accused of gathering information that could jeopardise Cambodia’s national defence.

On the sixth day of his trial, Ricketson was probed about the contents of a draft letter, addressed to former Australian Prime Minister Malcolm Turnbull and send to his friend and lawyer, Charles Waterstreet. 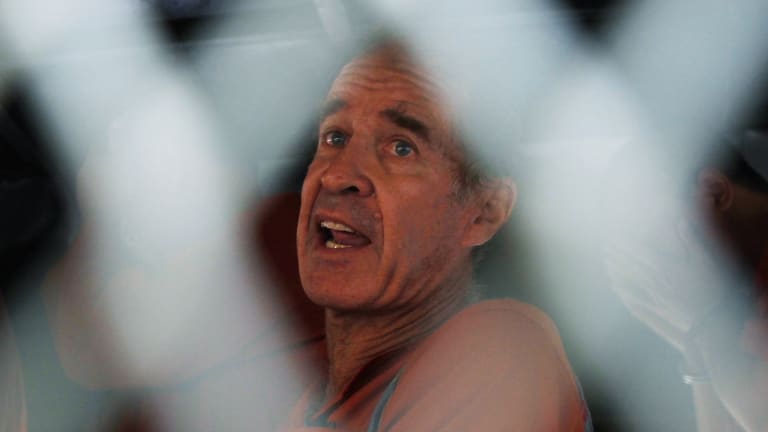 Australian filmmaker James Ricketson inside a prison van on his way to a hearing.

The email claimed Hun Sen had a 10,000-strong bodyguard unit, accused him of stealing the election, questioned why Australia continued to tolerate his military dictatorship and warned Turnbull against welcoming him with a smile and handshake to Australia.

Ricketson said the subject line was “Cambodian politics for Dummies” and described the tone as “whimsical”.

“It seems like it is not playful at all. You defame the Prime Minister [Hun Sen], also ‘killing people in a systematic way’… it seems you are saying something bad about the leader and also about the CPP,” Judge Sao said, referring to Cambodia’s ruling party.

Criticism of a government … whether it is constructive or destructive, cannot be confused, in my opinion, with espionage.

“It seems you support the [opposition] CNRP. The writing is not like a journalist at all. What is your intention?"

Ricketson said he was merely expressing his opinion and had a right to freedom of speech.

Ricketson responded that, “Criticism of a government anywhere in the world, whether it is constructive or destructive, cannot be confused, in my opinion, with espionage”.

“I feel from this line of questioning that it is my journalism that is in trial here,” Ricketson said.

He said it seems he has written articles “that the Cambodian government is not happy with”.

“There is now a certain amount of evidence that perhaps I am a political prisoner,” Ricketson told reporters from a prison van.

“If I am, I hope I am released along with the other political prisoners as soon as possible."

Cambodia has been through a turbulent 18 months, which saw the main opposition party forcibly dissolved, news outlets shuttered, and politicians, activists and journalists jailed on politically-motivated charges in the lead up to last month’s national election.

About two dozen political prisoners have been released in the past week alone following the landslide victory for Hun Sen, with the ruling party sweeping every seat in parliament.

Ricketson was also questioned about the existence of another email, in which he wrote to the wife of former opposition leader Sam Rainsy, asking her to check his article for any factual errors or misleading information.

Judges asked why the wife of a political leader would be asked to “edit” his article, but Ricketson said he was merely checking his facts.

Ricketson also told the court he planned to sue the Prosecutor Sieng Sok for “unlawful prosecution and false imprisonment”.