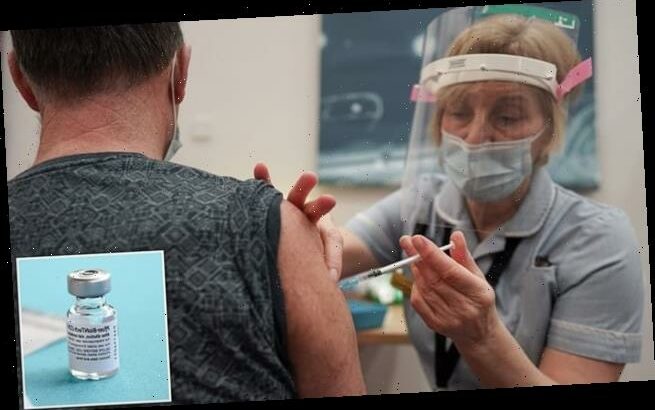 Pfizer’s Covid vaccine could produce a strong enough immune response to stop people spreading the virus, a doctor in Israel has claimed.

Researchers found in a small study that recipients of the jab developed up to 20 times more antibodies within a week of having the second dose of the jab.

Higher levels of antibodies are expected to lead to a stronger and faster immune response which could be more likely to clear the virus before someone spreads it.

Until now, scientists didn’t know whether vaccines would stop transmission and were banking only on it preventing severe illness and death. Pfizer itself has not published any data showing how the jab affects someone’s infectiousness.

Developers of other vaccines have also not offered any proof that their vaccines will be able to reduce transmission of the virus.

The survey done on 102 hospital staff in Israel is the first indication that a Covid-19 vaccine may stop transmission, saw all but two of them develop antibody levels that were even higher than patients who had recovered from Covid-19.

Antibodies are substances produced by the immune system which store memories of how to fight off a specific virus. 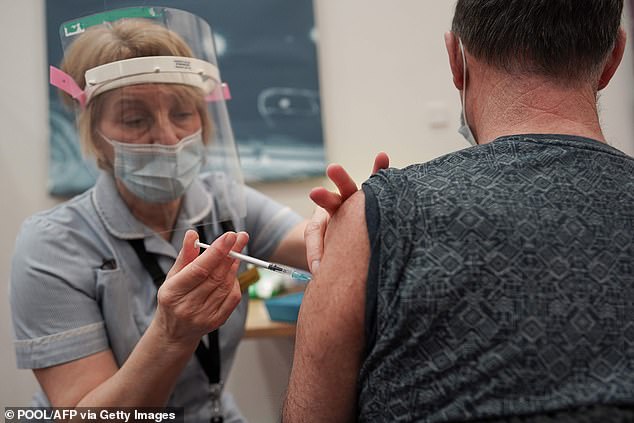 Recipients of the Pfizer/Biotech vaccine developed up to 20 times more antibodies within a week of having the second dose of the jab. Pictured: A key worker receives the Pfizer-BioNTech jab at the Life Science Centre, Newcastle upon Tyne

Medics running the study found that 100 out of 102 people mounted large antibody responses to the coronavirus after two doses of the vaccine.

One of the two who didn’t had a compromised immune system; the other is still being investigated, The Telegraph reports.

Antibodies are critical for the immune system because they both destroy viruses and also flag them up for destruction by other white blood cells.

The director of the hospital’s Infectious Disease Epidemiology Unit, Professor Gili Regev-Yohai, said he thought it unlikely that people who receive two doses of jab would spread the illness.

Elderly people have been the priority since the vaccine programme started in an effort to cut the risk of them developing severe illness.

The global trials run by Pfizer, Moderna, Johnson & Johnson and Oxford University and AstraZeneca had one primary goal.

The aim was to test whether people who got vaccinated were less likely to become ill with Covid-19.

To do that, they simply vaccinated half of each of their pools of more than 40,000 volunteers, with two doses a piece, and gave the other half two doses of a sham jab.

In earlier tests in monkeys, animals that got Pfizer’s jab had no traces of the virus in their respiratory tracts, and earlier tests in people showed they produced plenty of antibodies after vaccination.

Combined with the final clinical trial data, that suggests that the vaccine is triggering an immune response, and that immune response is strong enough to keep the virus from copying itself and spreading in the body.

In turn, that means the odds are low that someone’s viral load – the concentration of virus in their cells – is high enough to spread the infection.

However the trials that Pfizer completed were not designed to state for sure that the vaccine can slow the spread of the virus.

It comes after nearly 5million people aged between 70 and 80 are being invited to receive their first dose, with some in Whitehall suggesting the rollout is going so well that the wider adult population could be covered by June rather than September.

However, vaccines minister Nadhim Zahawi said people in their 70s will only be offered jabs in areas where the ‘majority’ of over-80s have already had their first shot.

That could mean people in areas such as London and Suffolk, where progress has been slower, will have to wait longer.

WHAT ARE THE KNOWN SIDE EFFECTS OF THE PFIZER VACCINE?

The UK medicines regulator advised today that anyone who has a history of ‘significant’ allergic reactions to medicines, food or vaccines should not get the Pfizer coronavirus jab.

Dr June Raine, the chief executive of the MHRA, told Parliament’s Science and Technology Committee that this was not identified in the trials.

‘We know from very extensive clinical trials that this wasn’t a feature,’ she said.

Allergic reactions to the vaccine are ‘very rare’, according to the trials involving more than 40,000 people.

Pfizer found a ‘very small number’ during its phase three clinical studies, which found 137 out of 19,000 people. This compared to a comparable 111 in a group of the same size who didn’t get the vaccine.

They also identified 12 possible side-effects from the vaccine, with seven identified as ‘very common’ meaning they are likely to affect more than one in ten people. Below are the known side effects.

The patient safety leaflet for the vaccine cautions that anyone with an allergy to any of the active substances in the vaccine should not receive the jab.

It adds: ‘Signs of an allergic reaction may include itchy skin rash, shortness of breath and swelling of the face or tongue.’

Allergic reactions to the vaccine are:

Very common (Likely to affect more than one in ten people)

Common (Likely to affect up to one in ten people)

Uncommon (May affect one in 100 people)