Is this a phantom flying straight towards the camera? Ghostly shape spooks paranormal investigator as he films in 800-year-old graveyard

This is the spooky moment a fitness coach claimed he saw a ghost fly straight at his camera as he explored an 800-year-old graveyard.

A smokey white figure appears to launch itself directly at Tony Ferguson’s camera as he investigated the cemetery at St Mary’s Church in Eling, Hampshire.

Personal trainer and paranormal investigator Tony claims he decided to scout out the cemetery after reports of a ‘negative presence’ from people visiting their loved ones’ graves.

The 33-year-old claims the moment he stepped foot in the graveyard he felt ‘unwanted’ and then suddenly heard a ‘whooshing’ sound which he now believes must have been the ghost whizzing past him.

While seeing visual evidence of what he felt and heard was ‘really weird’ for Tony at first, he says it is reassuring to know his mind was not just playing tricks on him.

After watching the footage in slow-motion, Tony believes the spirit to be a ‘controlling’ gentleman trying to discourage people from visiting the cemetery.

Tony, of Southampton, Hampshire, said: ‘I don’t usually investigate cemeteries. I don’t believe that just because people are buried there, they must be haunted. 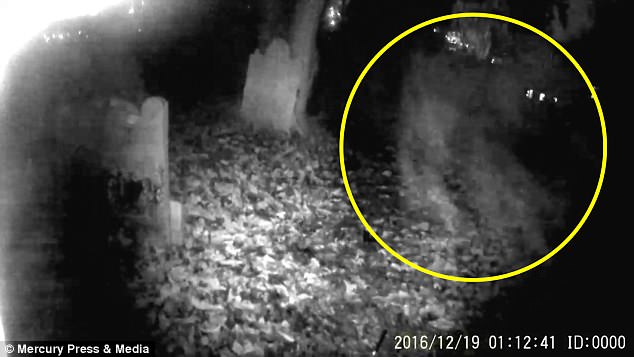 ‘But a few people got in touch to tell me they were concerned about their loved ones who are buried there. Every time they went they could feel this negative presence and it was making them very uncomfortable.

‘The whole time I was in the cemetery I could feel this bad energy. I felt like something didn’t want me there.

‘My REM pod, a device for communicating with spirits, kept going off as well so I was sure there was something paranormal going on.

‘Then I suddenly heard this ‘whoosh’. It came out of a grave and went straight past me. 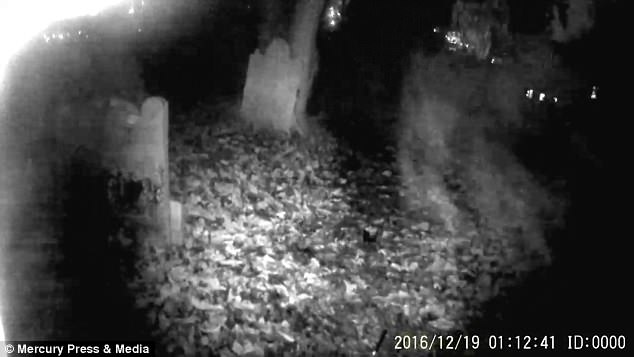 ‘When I watched back the footage and actually saw the spirit flying at me, it was really weird.

‘It is a very strange experience but it is also great to have how you feel validated. You always wonder if it’s just something in the air or your mind playing tricks on you but you can’t argue with visual evidence.

‘If you slow down the footage you can see the spirit is actually trying to manifest and taking form.

‘It is definitely an angry spirit. The cemetery is very old and I think it is the ghost of a gentleman who feels very possessive over it. 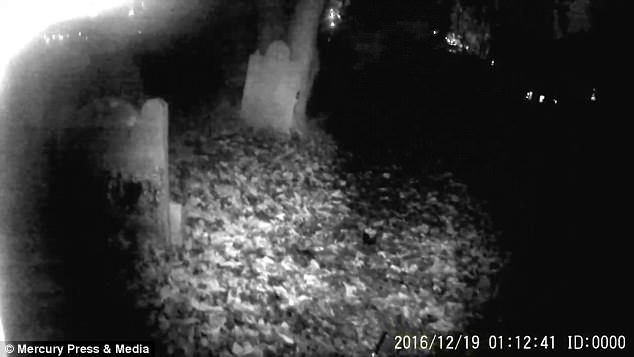 ‘He is clearly a very controlling spirit and doesn’t want people visiting the graveyard.

‘But I don’t think his negative energy is any risk to other people buried there. It is nice for me to be able to give that reassurance to people who were worried and give them some peace of mind.’

Tony got into ghost hunting just over a year ago after developing a fascination with the paranormal as a child.

Throughout his childhood Tony had a number of ghostly encounters with the spirits of a man and young girl in his granddad’s house.

After his paranormal experiences only became more frequent as an adult, Tony became convinced that something about his ‘energy’ attracts spooks.

Tony said: ‘My granddad’s house was haunted. There was loads of activity there with things flying around and the spirits of a man and girl always visiting so I was constantly surrounded by it.

‘Growing up around it meant I was intrigued from a very young age and as I got older I realised that I had this gift where any time I went into a haunted place, spirits would appear.

‘It must be something about my energy that just attracts them. It did used to scare me but I’ve got used to it now, most spirits aren’t harmful at all.

‘I decided to pursue this gift and picked up paranormal investigation as a hobby. At first I didn’t share my videos or photos with anyone because it was a very personal journey.

‘But after a while I decided I wanted to share some of the amazing things I have seen to open other people’s eyes to the paranormal world.’