Pick your own vegetables… at the supermarket! Leafy greens, salads and herbs will be grown inside hi-tech cabinets with their own water supply

Supermarkets are to start growing fresh produce in ‘pick your own’ aisles.

Greens, salads and herbs will be grown inside hi-tech cabinets, which have their own water supply and LED lights that promote growth 365 days a year.

Bosses at John Lewis, which owns Waitrose, have revealed that they are in talks with a British company LettUs Grow over plans to install what are effectively ‘urban farms’ in city centres. 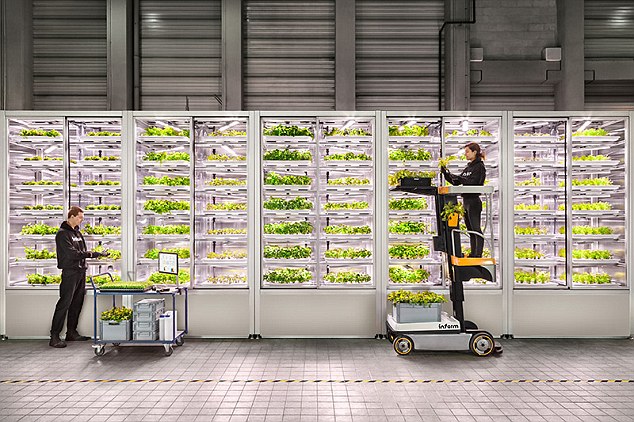 Leafy greens, salads and herbs will be grown inside hi-tech cabinets at supermarkets

At the same time, the German company, Infarm, is looking to bring its own in-store growing idea – which already operates in more than 50 shops and other locations in Berlin – to the UK.

Infarm has won financial backing from British venture capitalists and is in talks with major UK supermarket chains.

Infarm’s units, which measure around 6ft by 6ft and are 11ft high, can stand side by side producing crops that are harvested once or twice a week.

The units are sealed and the plants are produced in a hydroponic system, which means they are grown with a supply of enriched water rather than in soil.

They can then be harvested, roots and all, by staff and placed on counters to be picked up by customers. 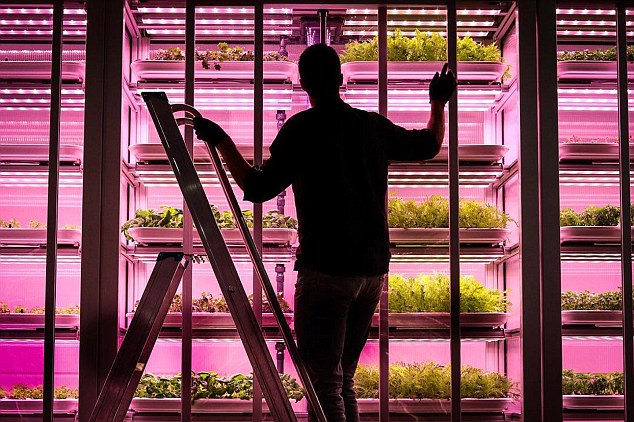 The Bristol-based company, LettUS Grow, says its system is more advanced and uses something called aeroponics, which involves growing the plants in cylinders and effectively bathing them in a fine mist of water-borne nutrients.

The company grows many types of vegetable in aeroponic systems in a disused railway tunnel in Bristol, including red cabbage, kale, salads and micro-herbs.

‘With the rise of Amazon and other online retailers, the retail experience has to become much more experiential,’ he told the BBC’s Farming Today.

He said that customers would want to pick their own salad instead of grabbing a plastic bag of it, adding: ‘You really re-engage with the food system and the provenance of our food.’ 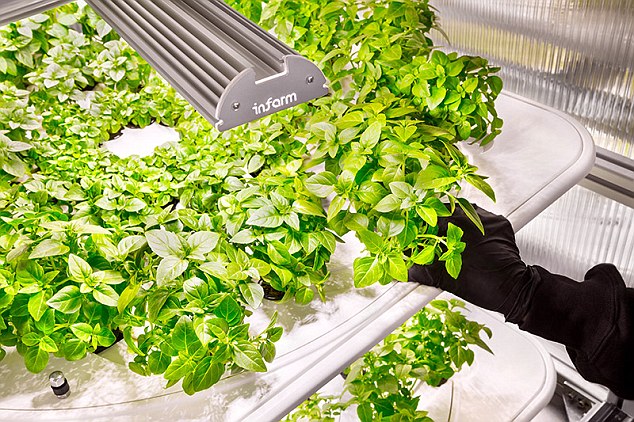 No chemicals or pesticides are needed and the fact the plants are grown under lights all year round, rather than being reliant on the seasons, raises output.

John Lewis has set up a scheme called JLAB to support entrepreneurs who are promising innovations in the way the nation shops.

It said LettUs Grow is among a small group of businesses it is in discussions with but said nothing has been confirmed yet in terms of rolling out its ‘pick your own’ aeroponic displays.

Peter Cross at John Lewis said: ‘Shops simply have no option but to inspire and delight customers.’