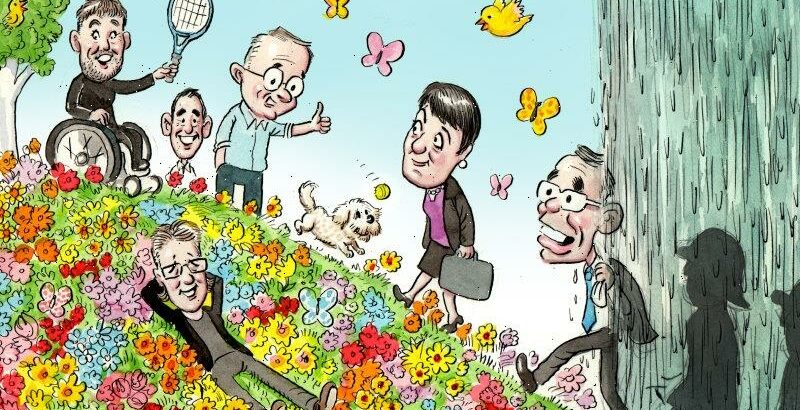 To Sally McManus, it felt like a blocked pipe suddenly was unblocked. “All this pressure had built up and people have been able to talk about things they didn’t talk about,” is how the ACTU secretary describes the federal government’s Jobs and Skills Summit.

“It’s exciting,” she tells me. “I came out of that room today so proud of all the talent in Australia.”

To Jennifer Westacott, it was similarly liberating. “What we lifted yesterday was the taboo on whatever topics people wanted to talk about,” the chief executive of the Business Council of Australia, representing about 100 of Australia’s biggest firms, said on Friday. “It’s taken out the accusatory, personal discussion and moved the conversation to the systemic issues that we need to fix and fix quickly,” she told me. 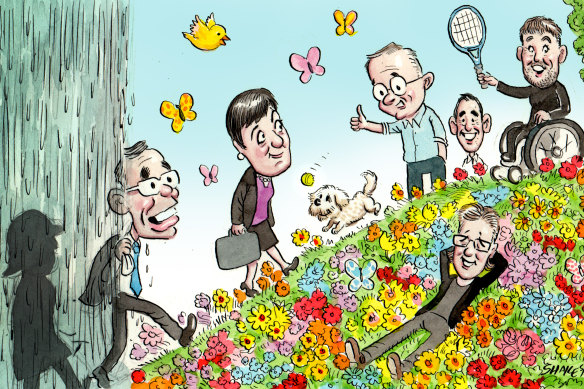 The summit was premised on failure. A gathering, two-part Australian failure. And there was consensus on this: that wages are falling in real terms, and that productivity is stagnant. The two are intimately connected. Together, they constitute a crisis of Australian living standards. If this goes unsolved, governments will be doing nothing more than managing national decline.

And there was consensus on at least two of the centrepieces of any solution: that women must be better embraced in the workforce, and that the national skills base must be upgraded.

As Westacott put it, one of the big successes of the summit was that “the gender issue has become a clear economic issue”. No longer considered a social issue or some sort of indulgence but an urgent necessity for economic revival.

Another was that the skills shortage “dominated every discussion”. In the food industry, from paddock to plate, the summit heard there was a shortfall of 172,000 workers. That’s just one sector, and a vital one. Untended, food shortages loom.

These issues of women and skills, as Westacott put it, are “the two big ones”.

The summit’s explosion of energy and enthusiasm for co-operative problem-solving was a manifestation of the frustration that had built over the past decade. The Morrison government, in particular, was congenitally allergic to any serious reform.

Strikingly, even one of the business lobbies seen as the most likely witch at the christening – the Australian Industry Group – was positive by the end of the two days: “I was sceptical,” chief executive Innes Willox tells me. “But it’s exceeded my expectations. It’s at least laying the groundwork for future conversation on the big issues – there’s a helluva lot of work going on. I think there’s a clear agenda now that the government can work towards on workplace relations, skilling, equity, employment disadvantage.”

This is a key point. The summit may have produced some immediate outcomes, but real reform is a long-run process. Serious change is painful, and it only happens through a process. The more co-operation and collaboration it engenders, the more likely that it succeeds.

The conflict-mongering of the Morrison government just jammed the pipes of progress. It doomed the country and, in the end, it doomed the government itself.

Treasurer Jim Chalmers said he was “blown away” by the goodwill on display among the 140 or so participants. The summit had exceeded “even our most optimistic expectations”, he said, as he brandished a list of what he called 36 concrete outcomes.

Opposition Leader Peter Dutton rejected his invitation, dismissing the event as a “union summit”. But not all Liberal politicians followed his lead. One Liberal leader had a front-row seat. NSW Liberal Premier Dom Perrottet chaired the group of state premiers and territory leaders that pitched a skills and jobs proposal to Anthony Albanese ahead of the summit. The premiers addressed him in the national cabinet meeting on Wednesday. This then fed into the summit announcements.

Perrottet was satisfied with the process and the outcome. “I was pretty pleased with the engagement,” he tells me. Under Morrison, the states and territories weren’t able to put items on the agenda for the national cabinet. “Now,” says Perrottet, “I can pick up the phone, the relationship is solid, and we are getting things done.” 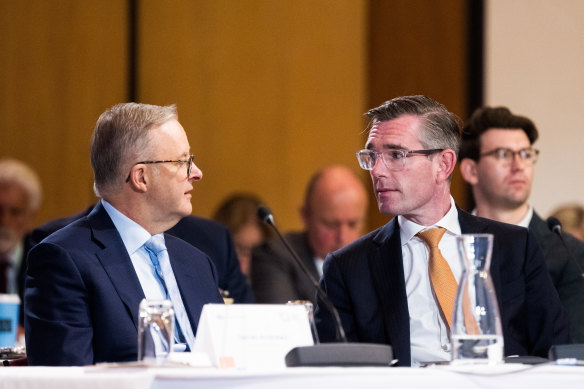 This week the premiers asked Albanese for two main outcomes. They wanted more resources for the Immigration Department so the shocking delays to visa applications could be fixed. And they wanted faster pathways to permanent residency for skilled immigrants so Australia could win the global contest for top talent. They got the promise of both. It helped that the Albanese government was already thinking about the problems.

Immigration Minister Andrew Giles told the summit on Friday that he’d inherited an extraordinary backlog – a million unprocessed visa applications. Since election day, that had been cut to 900,000. More effort was needed. He announced he was going to spend $36 million to add 500 extra staff to process visas.

For the short run, the senior minister for the portfolio, Home Affairs Minister Clare O’Neil, announced an increase in the permanent immigration program from 160,000 this year to 195,000 next. Of those, 34,000 would be going to the regions.

For the years to come, O’Neil announced a thorough review of the immigration system by three eminent experts. She promised “a big switch in our thinking” for a system she described as being “on continental drift” for a decade: “That switch is moving away from a system focused almost entirely on keeping people out, to one that recognises that we are in a global competition for talent.”

O’Neil said: “We make it easy for temporary migrants to come here, but very hard for highly skilled, permanent migrants. We’ve got it backwards.”

The leader of the Nationals, David Littleproud, was in the room. He was universally congratulated for a constructive contribution. He can tell his constituents that he extracted from the summit his top priority, which was a Coalition proposal that pensioners be allowed to work more hours without sacrificing pension entitlements.

The government announced on Friday a one-off income credit so that age pensioners can earn an extra $4000 apiece without losing any of their regular pension payments. This is designed to increase pensioner participation in an economy desperate for workers.

Sally McManus was one of many who shook Littleproud’s hand and talked about meeting for a later chat. In truth, the Nationals leader’s main motive for accepting his summit invitation was to differentiate his party from the senior Coalition party, the Liberals. In the process, he’s earned a lot of incidental goodwill.

Among the goodwill, there was also alarm. One of the summit announcements came from Workplace Relations Minister Tony Burke. The government would review industrial relations law to “get wages moving”, he said. Any tinkering with these laws opens the prospect of industrial strife and is hypersensitive.

The review would look to simplify the “better-off-overall test”, or BOOT, said Burke. This has been long regarded as a key protection of workers’ rights, but it has frustrated change. The employers and the unions agree that a more flexible BOOT is desirable in principle, potentially a big change.

And the review would remove “unnecessary limitations on access to single and multi-employer agreements”. These last three words aroused alarm and suspicion among employers big and small. Employers fear that, under the cover of those innocuous-sounding words, “multi-employer agreements”, the ACTU plans a return to pattern bargaining of the bad old days.

Pattern bargaining imposed a single template – a pattern – of workplace agreement across many firms with wildly different needs. It was anathema to many employers and fatal to some smaller ones. Innes Willox explains the concern: “It’s potentially a solution to a problem we don’t have. Because of the lack of detail and vagueness of the proposal, there’s the prospect of widespread, mass industrial action in support of claims. It’s caused enormous alarm in business. How would you protect businesses that didn’t want to take part?”

McManus assures that it would create options, not compulsions. The best protection against power grabs by any group at the expense of another is that Burke promises to conduct the review collaboratively with business and unions. In the spirit of the summit itself.

The Albanese summit was cast in the image of the Hawke summit of 1983, for decades hailed as the beginning of the great Australian era of reform. The benefits of those reforms are long exhausted. Ross Garnaut, Bob Hawke’s economic adviser at the ’83 summit, says Australia has that chance again now.

It’s a promising beginning. The only people who should dismiss the exercise out of hand are the ones who believe Australia is absolutely perfect as it is. Hands up, anyone? I didn’t think so.

Labor’s Jim Chalmers congratulated himself and rejoiced in his summit: “This is how a first-rate country runs itself.”

The Liberals’ Dominic Perrottet is hopeful that it’s the beginning of something great: “The engagement is refreshing. I hope it lasts.”

And Dylan Alcott, Australian of the Year and advocate for disabled people, told the summit the many reasons that disabled people make top-class workers. And he wrote the summit’s punchline for the nation: “Let’s kick some arse together!”