The Remain Alliance is ON: Plaid Cymru leader Adam Price says there have been ‘positive discussions’ with the Lib Dems and Green Party about a general election pact designed to boost the number of anti-Brexit MPs

Plaid Cymru today confirmed it has been locked in ‘extensive’ and ‘very positive discussions’ with the Liberal Democrats and Green Party about forming a general election Remain Alliance.

Adam Price, the Plaid leader, said he hoped to be able to make an announcement in the near future about a potential December 12 pact between the three parties.

A non-aggression alliance between the trio would see two of the parties step aside in key seats to boost the chances of an anti-Brexit MP being elected.

The trio will be hoping to replicate the success of the Brecon and Radnorshire by-election in August when Plaid and the Greens did not stand a candidate, paving the way for a Lib Dem victory.

The specifics of a possible pact were not detailed by Mr Price as he launched his party’s general election campaign in Menai Bridge in Anglesey today.

But he said that ‘in principle’ Plaid is ‘very much supportive’ of working with the other parties. 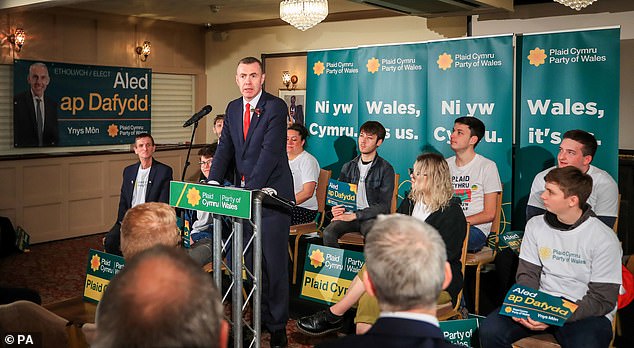 ‘We hope to be able to reach an agreement but obviously we are still consulting with our local parties etc and we hope to make an announcement, if we’re able to do so, very soon.

‘In principle, we’re very much supportive of the idea of trying to maximise the number of MPs from pro-Remain parties that are elected from Wales and indeed, of course, there are similar discussions between the Greens and the Liberal Democrats in England.’

The Lib Dems won the Brecon by-election with a majority of 1,425 votes, snatching the seat away from the Tories.

If Plaid and the Greens had stood candidates it is possible that Jo Swinson’s party would have fallen short and the Conservatives would have held onto the constituency.

Mr Price said: ‘Obviously we have got to respect our members’ feelings and party democracy so that’s part of the reason why we continue to have those discussions.

‘But I think, in principle, putting the public interest, the national interest, before our narrow party interest really is the right thing to do.’

It was reported at the weekend that a Remain Alliance could be in place in up to 60 seats at the coming election.

Ms Swinson did not reject that number when asked yesterday as she said ‘the specifics of announcements will be made in due course’ but it is ‘well understood that these discussions have been taking place’. 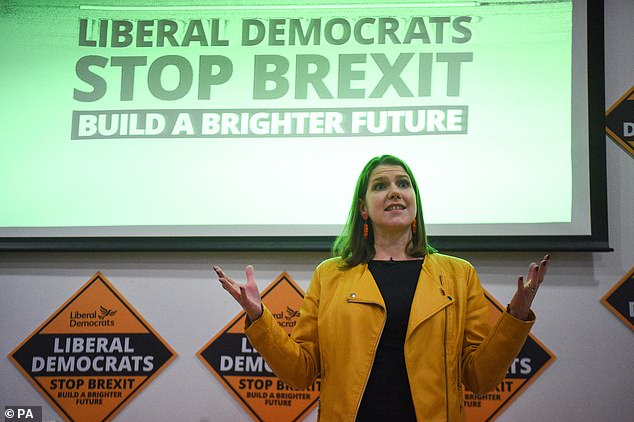 Jo Swinson, pictured in Kensington, London on Saturday, said discussions have been taking place with the Greens and Plaid Cymru about forming a Remain Alliance

Asked about the 60 seats number specifically, the Lib Dem leader said: ‘I wouldn’t necessarily assume that the numbers are accurate but we’ve been having those discussions because there are people in these different parties, these are parties that want to stop Brexit and remain in the European Union.

‘We found that in the Brecon and Radnorshire by-election at the beginning of August we had a successful example of where Plaid Cymru and the Green Party didn’t field candidates, they stood side by side with the Liberal Democrats, Jane Dodds, and we were able to win that seat and return to Parliament an MP who will campaign enthusiastically to Remain and that’s what happened.

‘So we are in those discussions and an announcement is going to be forthcoming.’

Ms Swinson claimed that in the ‘vast majority of constituencies’ it would be the Lib Dems who are best placed to put forward a Remain Alliance candidate.

But she said there would be ‘some seats’ in Wales where Plaid would be the best-placed Remain-backing party and ‘a small number of seats where it’s the Green Party’.