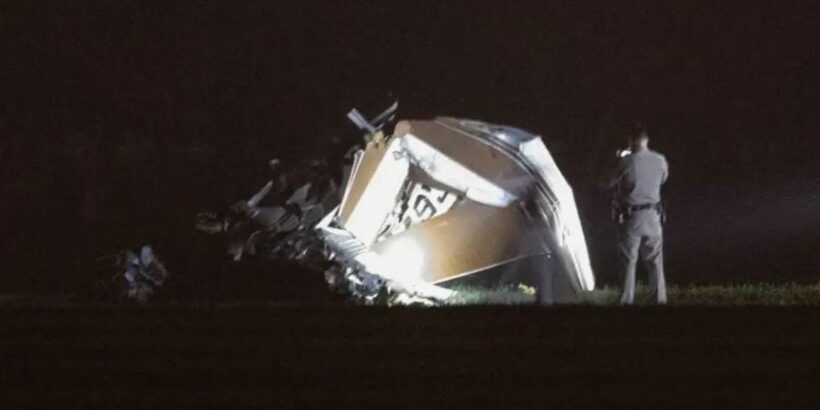 A flight has crashed just 16 seconds after taking off, killing four people on board.

The small, single-engine Beechcraft 35 Bonanza left the Visalia Municipal Airport in California at around 6.30pm on Saturday.

It crashed 16 seconds later on the motorway.

Emergency services arrived on the scene within minutes, but nobody was taken to hospital.

Police have yet to reveal the identities of those on-board, and it is not know why the plane crashed – although there was said to be a thick layer of fog in the area.

Sergeant Jesse Cox, of Tulare County Sheriff’s Office, said: “When we all responded, we were searching for the plane.

“The area is a large reservoir area and it's hard to get back there.

“We just circulated the area as much personnel as we had until we found it.”

There was, according to local reports, no fire at the crash site.

The plane is registered to a David Chelini. of Sacramento, according to local reports, but whether he was in the plan at the time has not been confirmed.

The investigation could take “weeks”, local news states, due to safety checks at the site.

The crash area is thought to be around 500ft, with debris scattered in all directions.

The crash caused a grass fire, but was extinguished shortly after, although witnesses claimed there was a “fireball” and “explosion” seen at the time of the crash.

It happened around a mile and a half away from the Chardon Municipal Airport, but not details as to what caused the crash have yet been released by local police.

For the latest breaking news stories from the Daily Star, sign up for our newsletter by clicking here.