The most terrifying take off in the world! Video captures plane leaving Everest base camp on short runway that falls away to 2,000ft DROP

Terrifying footage shows a plane taking off while facing a dramatic 2,000ft drop.

Nepal’s Lukla Airport, regarded as one of the world’s most dangerous, has a 1,729ft airstrip which comes to an abrupt end, leaving pilots no room for mistakes when taking off.

Video footage, uploaded to YouTube by aviation channel Cargospotter, shows several aircraft landing and taking off from the 98ft-wide Himalayan runway, located near the Everest base camp. 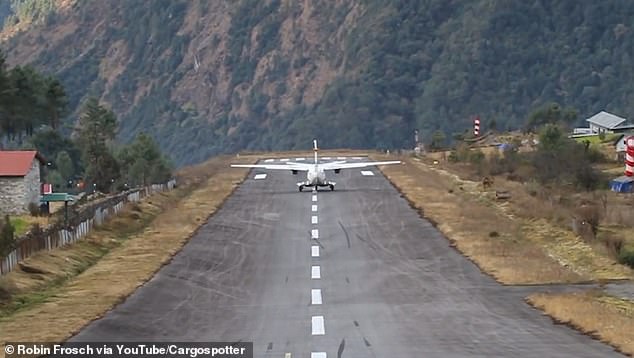 Video footage shows several aircraft landing and taking off from the 98ft-wide Himalayan runway, located near the Everest base camp

Due to the difficulty of successfully navigating the airport’s tricky terrain, Nepal’s Civil Aviation Authority only allows experienced pilots with at least 100 short-takeoff-and-landing (STOL) missions under their belt to land there.

Additional requirements include having over one year of STOL experience in Nepal and completing ten missions into Lukla with a certified instructor pilot.

The video’s description details how the airport is often considered ‘the most dangerous airport in the world’.

It continues: ‘The airport is quite popular because Lukla is the starting point for all people who would like to start the climb to the Mount Everst base camp. 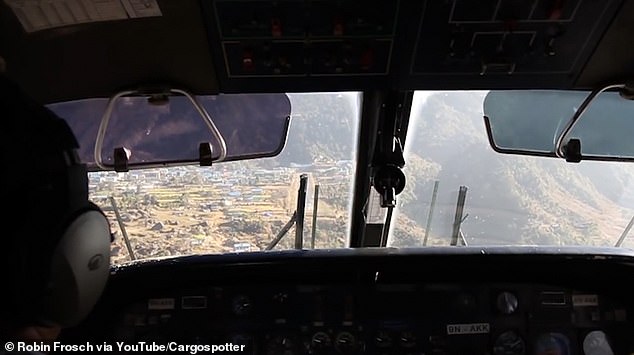 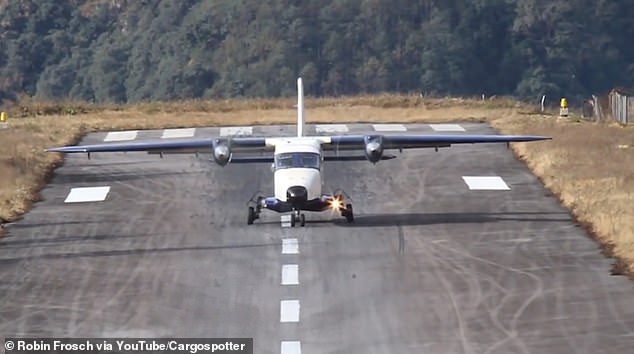 Several crashes have been recorded at the airport, which is popular among mountaineers for its proximity to Everest

‘For most of us aviation enthusiasts Lukla is quite famous as well cause this airport is quite unique.

‘You don`t have a chance to go around, if the pilots make a mistake you`ll end up in the wall behind the runway which already happened a few times.

‘If you frequently approach this tiny airport you just need extreme piloting skills.’

Several crashes have been recorded at the airport, including an incident on October 8, 2008, when Yeti Airlines Flight 103 crashed on its final approach and caught fire, killing eighteen passengers and crew, leaving only the plane’s captain alive.

The plane was said to have caught fire after crash-landing and hitting the perimeter boundary at the airstrip.