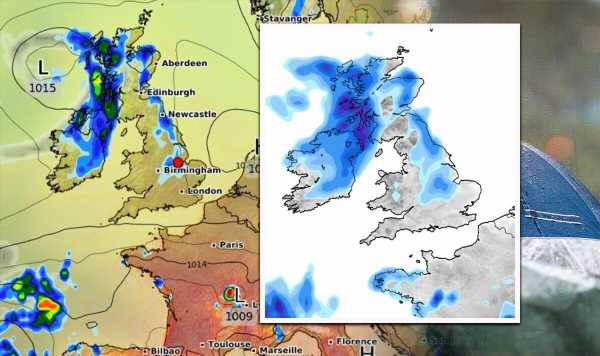 As Britons gear up to celebrate the four-day bank holiday weekend to mark the Queen’s 70th year on the throne, attention is largely focused on whether the weather will hold out for it. While forecasts began fairly optimistic, the Met Office has warned forecasts now to be a “loose cannon”, with showers developing most days largely in the more northern regions of the UK.

Much detail is yet to be determined for the long Jubilee Weekend, but the path of a plume of warm air from over the near continent remains the focus of much of the weather uncertainty.

Met Office deputy chief meteorologist Chris Bulmer said: “After a cool start to the week, temperatures are expected to return back to around average through the week.

“What we’re keeping an eye on for the latter part of the week is how far north this plume of warm air comes. This brings the potential for outbreaks of heavy rain in places.

“There’s still a lot to be determined for the Jubilee Weekend forecast.

“On balance, it looks like after a showery start, though still fine in places, high-pressure will attempt to build from the west bringing more settled and drier weather, at least for some.”

“It’s going to meander about fairly randomly, that makes its behaviour difficult to predict.”

Due to the low pressure prevalent over the Azores and the high pressure over Iceland, an unusual weather system is formed with a weaker jet stream and more random weather patterns.

What does the weather look like in my area?

Over the course of the day on Thursday, rain is expected to sweep a large expanse of Ireland, from Wexford and Dublin up to Belfast.

DON’T MISS:
How to get rid of snails from your garden – 6 easy and natural methods [EXPLAINED]
Top 50 things about summer – including visiting seaside and no coat [ANALYSIS]
Energy bills: Will all pensioners get £300? [INSIGHT]

According to WXCharts, this rain will move on Bangor, and over to the more northern parts of England and southern Scotland.

Areas around Newcastle, Glasgow, and Edinburgh are expected to be hit with rainfall, and this rainy weather is predicted to hold out into Friday, where it will sweep across the Midlands from Peterborough down to Bristol.

The more southern regions of England may narrowly escape the rainfall, with these areas predicted to remain largely dry with temperatures reaching around the 20C mark.

The Met Office’s long forecast reads: “It is most likely that the start of the period will be fine and dry, with plenty of sunshine in places.

“Some southern and eastern areas will perhaps be cloudier at times, and there is a chance that unsettled weather may reach the far south over the weekend.”

However: “Winds should be light, but slightly breezier in the south, especially along the coast.

“Temperatures will be higher in sunnier parts of the north and west, but closer to average elsewhere and still cool at night.”

Saturday and Sunday look to be largely dry across the board for the remainder of the weekend, with only short bursts of rain expected to hit areas around Newcastle, Edinburgh and Aberdeen.