Lombok: Three-month-old Akila has never lived in a house.

Born on September 9, a month after a magnitude 7 earthquake smashed the resort island of Lombok, she has only ever known tents and temporary housing.

Like thousands of people here, Akila and her family are still waiting for the 50 million Rupiah ($4600) per household in aid that was promised by Indonesian President Joko "Jokowi" Widodo four months ago to help rebuild their home. 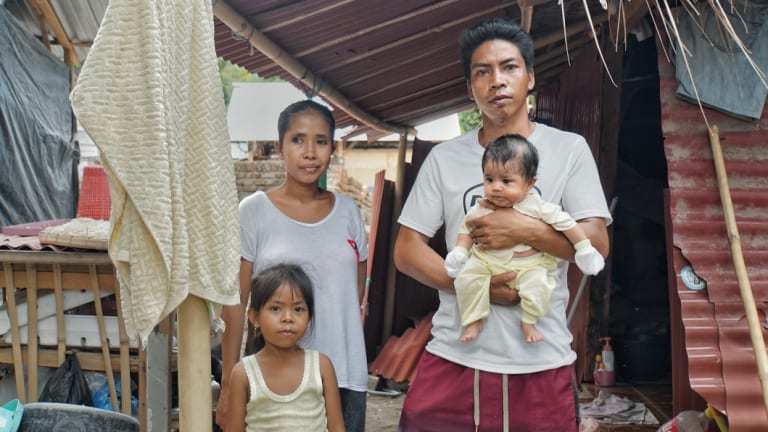 Hanan and his family next to their temporary house.
Credit:Amilia Rosa

Akila's father, Hanan, said he was now back working full time at the nearby resort island of Gili Trawangan, but business was still slow as tourists have not returned in their former numbers.

"We are waiting [for government aid]. I am grateful that my baby girl or anyone in my family hasn't been sick [from] living in a tent or the temporary house," Hanan says.

"But it leaks when it rains, it's hot during the day and it's very cold at night. It is not ideal. We live near the ocean, [so there are] strong winds. I am afraid that it will blow away our current home."

After months living in ramshackle temporary accommodation, Hanan has a message for the president, universally known as Jokowi: "Please keep your promise, it's been months now".

From Hanan's village of Pemenang in the island's north west, through north Lombok to the east of the island and the village of Sembalun Bumbung, which lies in the shadow of the Mount Rinjani volcano, Lombok residents said time and again they were still waiting for financial assistance to reach them so they could rebuild.

Ismail, another resident of Pemenang, is now living in a temporary house built by NGO Aksi Cepat Tanggap – one of 14 temporary houses in his village. 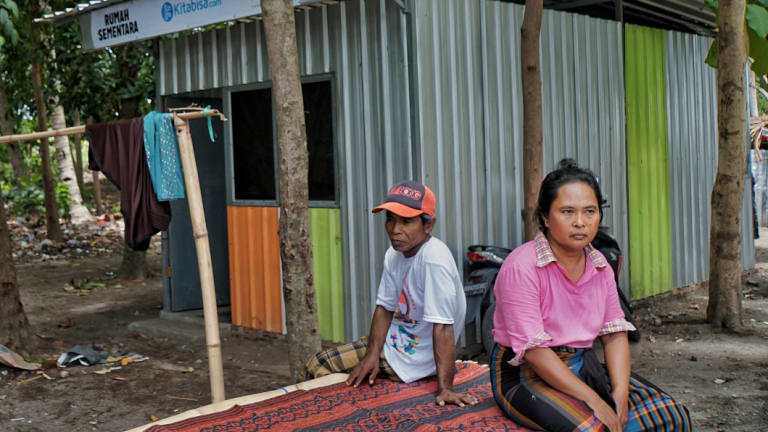 Ismail and his wife sitting in front of the temporary house build for them by an NGO.
Credit:Amilia Rosa

It has one bedroom and a living room, aluminum sheets for roofing and no electricity. Sometimes when it rains the water enters his shelter because there is a gap between the wall and the roof for ventilation.

"We are grateful for it, but this is only temporary. We are still waiting for the government aid. All I know is that our house has been listed as badly damage."

He doesn't blame the President, or the central government, for the reconstruction delays.

"I don't think it is Jokowi, I think it's the local government. I don't know what they are doing, I don't understand why it is taking so long. What is the hold up?" 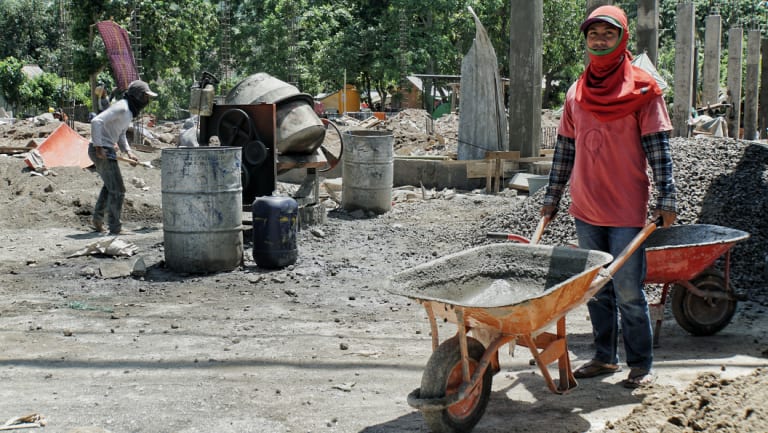 Amrulah working at a construction site in his village Nipah – North Lombok.Credit:Amilia Rosa

In Nipah, a North Lombok village, Amrulah said he and his neighbours had not received any money to rebuild yet, "not even 1000 Rupiah [0.1 cents], nothing".

"No one in our village has received anything that I know of. Maybe the President has become poor? Almost everybody in the village lost their homes. But until now, nothing," he said.

"What little logistics we used to received stopped a while back. It used to be some noodles and rice, but for the last month, nothing."

Perhaps 60 per cent of small local shops have now reopened, and work is underway on rebuilding some of the bridges and roads that were damaged in the quake.

But tens of thousands of people are still live in temporary housing, or in shacks they have cobbled together amid the ruins of their home, and evidence of the damage and destruction is still widespread. 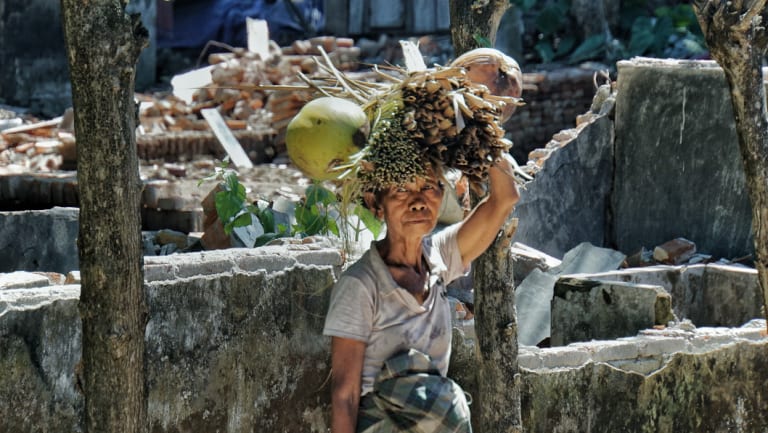 A villager stands in front of the ruins of her village in North Lombok destroyed by the deadly Lombok earthquake.
Credit:Amilia Rosa

"Not all people whose houses were destroyed have received aid. BNPB has disbursed 1.5 trillion Rupiah so far as stimulus [to rebuild] the houses. But local government has not given all of the money to people. The slow pace of collecting data [on destroyed houses] has caused the slow handling."

He said the construction of RISHA (Rumah Instan Sederhana Sehat, or Instant Simple Healthy Homes) – a concrete panel home that is supposed to be able to be built quickly – was proceeding too slowly.

"The target [for house reconstruction] is 400 units per day, as the Vice-President [Jusuf Kalla] has directed. Today it's only 26.5 units per day day," Sutopo said.

Data from the reconstruction taskforce in Lombok showed that 4151 families had so far requested RISHA homes be built for them, but just 49 had been built and construction of another 1447 units was under way. 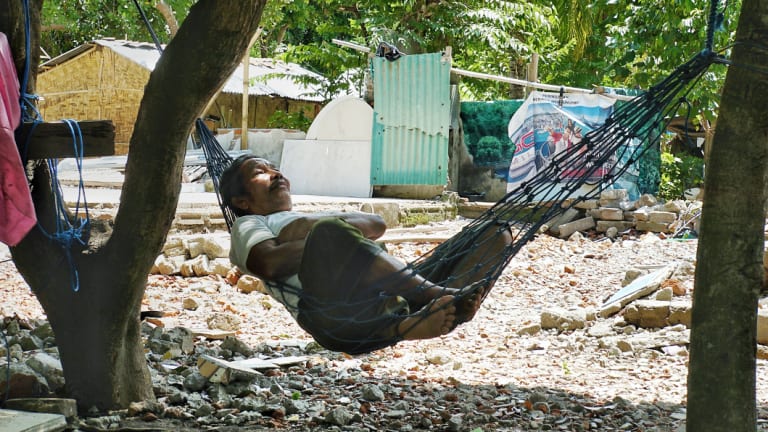 A villager from Nipah in North Lombok rests in a hammock in front of the ruins of what used to be his big family house.Credit:Amilia Rosa